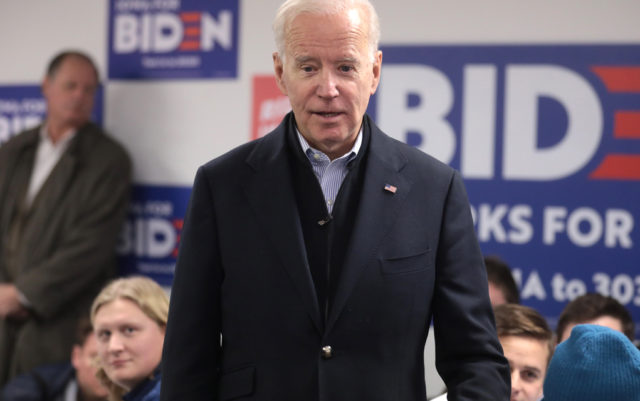 Polls routinely show that Democrats overwhelmingly favor legalizing marijuana, so you would think that the Dems would include a plank in their national platform calling for the legalization of pot at the federal level.

On Monday, July 27, the Democratic Party’s platform committee rejected an amendment supporting legalization. The vote was 50 to 106, with three abstentions.

The decision was unsurprising. American political parties don’t like to embarrass their presidential candidates by putting stuff in their platforms that contradicts the candidate’s position on issues, or repudiates his most notable political achievements.

And the Democratic Party’s presidential candidate this year is Joe Biden, whose most lasting legislative achievement as a U.S. senator was sponsoring the crime bills, including the infamous 1994 crime bill that made the war on drugs the law of the land — and turned it into a war on black and Latino Americans.

And to this day he clings to his opposition to legalizing marijuana like a deplorable clings to her rifle and Bible.

So when it comes to the party platform, what Uncle Joe wants Uncle Joe gets. Here’s the plank on pot that the platform committee adopted after rejecting the amendment that would have put them on record supporting federal marijuana legalization:

“Democrats will decriminalize marijuana use and reschedule it through executive action on the federal level. We will support legalization of medical marijuana, and believe states should be able to make their own decisions about recreational use. The Justice Department should not launch federal prosecutions of conduct that is legal at the state level. All past criminal convictions for cannabis use should be automatically expunged.

“Substance use disorders are diseases, not crimes,” the draft platform states. “Democrats believe no one should be in prison solely because they use drugs. And rather than involving the criminal justice system, Democrats support increased use of drug courts, harm reduction interventions, and treatment diversion programs for those struggling with substance use disorders.”

The phrase, “Democrats believe no one should be in prison solely because they use drugs,” comes straight out of the talking points. And it’s pretty rich considering that millions of black and Latino Americans went to prison for drug crimes thanks to Biden.

With Election Day fewer than 100 days away, here’s the state of play with marijuana ballot questions, according to a tour d’horizon by Sean Williams at The Motley Fool.

Recreational and/or medical marijuana legalization ballot questions will appear on the ballots in New Jersey, South Dakota and Mississippi.

Signatures on initiative petitions are being checked in Arizona, Montana and Nebraska, and all three are likely to make it onto their state ballots as well.

There’s an outside chance that Oklahomans will vote on some form of marijuana reform too.

The New Jersey measure to legalize recreational pot was put on the ballot by the state’s legislators after those worthies proved too chicken to pass it themselves. A poll taken in April by Monmouth University found 61% support. A survey done by DKC Analytics earlier this month found 68% support.

Mississippi voters will consider two medical marijuana legalization ballot questions. After an initiative to legalize medical marijuana for 20 specific conditions was petitioned onto the state ballot, the legislature put a more restrictive competing measure of its own on the ballot, which would limit access to terminally ill patients.

On July 1, Arizona activists submitted more than 420,000 signatures on a recreational marijuana legalization initiative petition. They needed 237,645 valid signatures to get on the ballot. As of this writing the signatures were still being checked. A poll taken in early June showed more than 65% support.

Nebraska supporters of a medical marijuana initiative submitted 182,000 signatures on July 2. They needed 121,669. A McLaughlin and Associates poll found 76% support.

And in Washington, D.C., where voters legalized recreational pot possession but not sales in 2014, it appears activists collected enough valid signatures to put a psychedelics decriminalization measure on the November ballot.