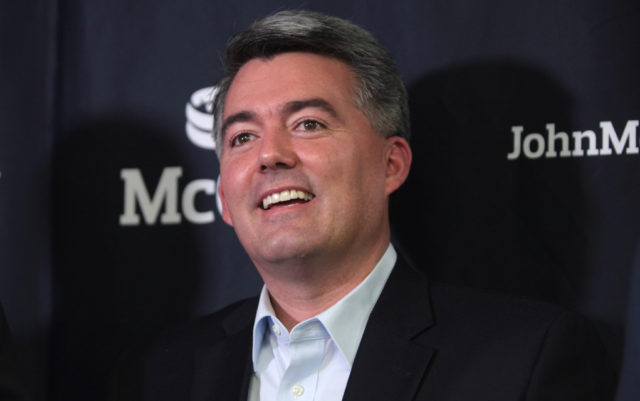 Colorado Republican Senator Cory Gardner struck a mighty blow for marijuana legalization and states’ rights recently. If things play out like Gardner thinks they will, it may turn out to be the most important step toward legalization in a generation.

Last week the Washington Post reported, and the White House confirmed, that Gardner had made a deal with President Trump regarding federal marijuana policy as it applies to Colorado and to the country as a whole.

Gardner said that Trump told him the federal government would not interfere with Colorado’s marijuana legalization of recreational marijuana and would take a similar hands-off policy with regard to the other eight states that have legalized recreational pot.

That in itself is a big deal. It essentially pulls the rug out from under Attorney General Jeff Sessions’s guerilla war on legal marijuana.

But Gardner got a second promise from Trump as well: The Senator said Trump also told him he would support federalism-based legislation that will allow states to decide how they want to regulate marijuana without federal interference. That’s a really big deal.

In return, Gardner promised to lift his blockade on Senate consideration of U.S. Department of Justice nominees.

Gardner had used that authority to embargo most Justice Department nominees since January, after Sessions revoked the Cole Memorandum, which set out a federal hands-off policy toward states that had legalized either recreational or medical marijuana.

Gardner went ballistic because Sessions had lied to him during his confirmation hearing regarding what he’d do about marijuana.

Sessions howled like a stuck pig, but Gardner held firm until he got Trump’s promises. Now that’s the art of the deal.

Gardner told the Denver Post’s Cannabist website that in addition to taking a states’ rights/federalist approach to marijuana, it would address issues like banking, taxes and research.

In an ideal world, the bill would remove marijuana from the list of controlled substances and start treating it like alcohol in federal law. A more modest approach would write the Cole Memorandum into federal law and leave the issue of marijuana’s contemptible classification as a Schedule I controlled substance (like heroin) for another day, which might make the bill easier to pass.

Trump has been known to change his mind in a heartbeat. So will he stick with the deal?

There are a lot of reasons to think he will:

• There’s virtually no political downside for him. While the only two demographics that still oppose legalization are Republicans and Americans over 65, Trump isn’t likely to lose many Republican or geezer votes over pot.

• There’s a lot of political upside. Nationally, more than six in 10 Americans support legalization; support among millennials is more than 70 percent in most polls. Millennials have been trending Democrat; Trump and the GOP generally will need to win more millennial support to avoid a blow-out in the 2018 mid-terms and to keep 2020 competitive. Leading on marijuana legalization could get them some. Opposing legalization could lose them a lot.

• Marijuana is becoming an issue in the mid-terms. Candidates are running on marijuana legalization and getting traction on the issue. By supporting a states’ rights approach to legalization, Trump is putting himself on the popular side of the issue. And his support helps Republican candidates with tough races in blue and purple states defuse an issue that could kill them.

• Trump keeps his promises. During the 2016 campaign, Trump promised to take a states’ rights approach to marijuana. Whatever you think of Trump, he’s been better than a number of recent presidents about keeping his promises. He doesn’t have any good reason not to keep his promise to Gardner. And a lot of good ones to keep it.