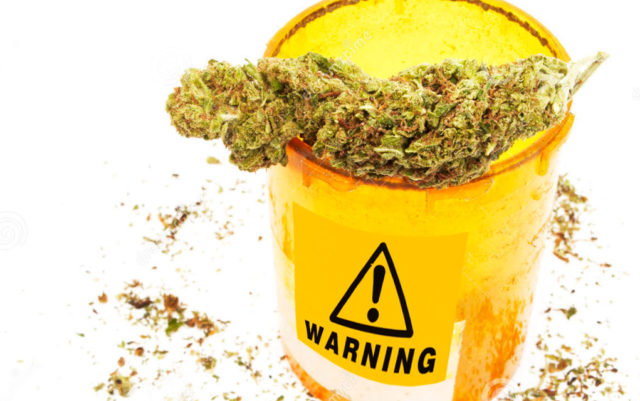 Less than a month ago, a brave little band of Colorado marijuana recriminalizers and drug war dead-enders announced they were going to launch a petition drive for a state constitutional amendment that would 1) limit the THC content of marijuana and marijuana products sold in Colorado to 16 percent, and 2) require that all pot and pot products carry a warning label that read like something of a bad re-make of Reefer Madness.

“Warnings,” which would have been written into the Colorado Constitution, included birth defects, reduced brain development, permanent loss of brain abilities, increased risk of brain and behavioral problems in babies, altered senses, mood swings, impaired thinking and so on.

The supporters characterized this as a “common-sense” health measure. The marijuana industry said its passage would outlaw 80 percent of the marijuana and marijuana products sold in the state.

Three weeks after kicking off their petition drive, the neo-prohibitionists issued a press release saying they were withdrawing the initiative in the face of insurmountable opposition.

“139 is done,” said former Colorado House Speaker Frank McNulty, a leader of the Healthy Colorado Coalition, the official name of the group sponsoring the initiative.

Leaders of the group offered a number of reasons for what sent them into sudden withdrawal.

The Associated Press reported that the Healthy Colorado Coalition issued a statement saying they were unable to raise enough money to advertise their initiative.

“Putting it on the ballot simply wouldn’t have been enough,” according to Ali Pruitt, one of the measure’s prime sponsors.

“We simply couldn’t go toe-to-toe with the marijuana moguls who committed tens of millions to defeat our common-sense controls on the sale of recreational marijuana,” Pruitt continued. “The marijuana industry built a wall of money between us and the November ballot that we simply couldn’t break through.”

Added former Lakewood High School Principal Ron Castagno, another prime sponsor of the initiative, “The Marijuana Moguls put a pile of campaign cash on the table and won. Our kids, and our communities are in crisis, for now.”

Kids in crisis, huh? On June 20, about the same time the re-crim gang was launching their petition drive, the Colorado Health Department announced that its biannual Healthy Kids Colorado Survey found that marijuana use among high school students in 2015 was down slightly from 2011, the year before recreational marijuana was legalized in the state.

McNulty’s take on why Amendment 139 folded was a little different. He claimed that the reason his group had to throw in the towel was that a group opposing the amendment had paid off signature-gathering firms to not work for the Amendment 139 time team.

I’m told that one might have some truth to it. The version I heard was that anti-139 forces got the most prominent (and competent) signature gathering firms under contract before the Amendment 139 people contacted them.

But signature gathering isn’t a black art, and there are companies all over the United States that do it competently. It’s inconceivable that the so-called marijuana moguls could have locked up all of them and that McNulty couldn’t have found one somewhere in the country.

Successful petition drives often rely on a combination of paid and volunteer signature gatherers. If the Amendment 139 campaign folded in three weeks due to its inability to find paid petition gatherers, chances are it also had a paucity of unpaid volunteers -— which is much more serious than lack of money because it would indicate an absence of popular support.

The poor-mouthing by Amendment 139 supporters over their inability to raise enough money to hire paid signature gatherers, much less advertise the initiative, seems implausible to say the least; the roster of the nation’s most prominent marijuana neo-prohibitionists is shot through with people who have a nine- and 10-figure net worth.

If the Amendment 139 folks couldn’t get them to pony up the necessary dough for a petition drive and advertising campaign, chances are that polling showed the initiative was dead on arrival.