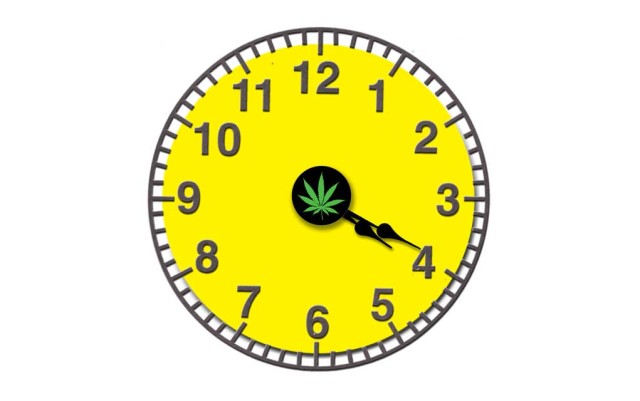 A High Times reporter named Steven Bloom was walking through the parking lot at a Grateful Dead concert in Oakland, when someone shoved a flyer into his hand.

The flyer also helpfully explained where the term 420 came from:

“420 started somewhere in San Rafael, California, in the late ’70s. It started as the police code for Marijuana Smoking in Progress. After local heads heard of the police call, they started using the expression 420 when referring to herb — Let’s Go 420, dude!”

Bloom, who had never encountered the term 420, wrote a piece on it. His yarn appeared in the May 1991 issue, along with the picture of the flyer.

Alas, the information in the flyer was hazy. It turns out there is no 420 police code in California; for years nobody bothered to look it up. And while the term originated in San Rafael, it was in 1971, not the late ’70s.

Little matter. High Times Editor Steven Hager jumped on the story like a hippie on an abandoned stash.

“I started incorporating it (420) into everything we were doing…,” he told the Huffington Post in 2011. “The publicity that High Times gave it is what made it an international thing…”

By the time Bloom acquired the leaflet, the term had been in use for years among Dead Heads. But where did the Dead get it?

From the true originators of the term 420, who outed themselves to Hager in 1997, and later to the Huffington Post.

The originators were a clique of five San Rafael High School students called the Waldos — because they used to hang out around a particular wall at the school.

In September 1971 they heard that a Coast Guardsman stationed at Point Reyes in Marin County who had been tending a personal grow near the station. He had gotten cold feet and abandoned the patch, but not before drawing up a map showing its location, which he gave to his brothers-in-law. Who shared it with one of the Waldos. Who set out to find the secret garden.

San Rafael High had a statue of Louis Pasteur on the campus, and the Waldos would meet at the statue, at 4:20 p.m., before setting out for Point Reyes. On pot hunting days they would tell each other “420 Louis”, which eventually got shortened to 420 and turned into their code word for anything involving pot.

“We’d meet at 4:20 and get in my old ’66 Chevy Impala and, of course, we’d smoke instantly and smoke all the way to Point Reyes and smoke the entire time we were out there,” said Steve Capper, one of the Waldos. “We did it week after week. We never actually found the patch.”

So how did the story spread to the Dead? In the late ’60s the Grateful Dead decamped from San Francisco and landed in San Rafael. It turned out the father of one of the Waldos handled real estate for the Dead, and the older brother of another was good friends with bassist Phil Lesh. The Waldos started hanging with the band, smoking with its members, and using the term 420 in their presence. And before long the term spread to the Dead Heads.

A while back the Waldos, all of whom are reasonably successful adults, decided to tie up the final loose ends of the story and cement their claim to being the originators of 420. By finding the mysterious Coast Guardsman.

And, after years of looking, they did.

His name was Gary Newman. They found him earlier this year in a homeless camp in San Jose — slated for bulldozing due to its proximity to the stadium where Super Bowl 50 was to be played.

The Waldos put Newman up in a motel until after the game, and they all took a trip up to Point Reyes. Newman had planted the pot patch on federal land near the lighthouse. Now 68, he never knew he was the inspiration for 420.

“It was like having a meeting with an old friend you never knew,” said Dave Reddix, one of the Waldos.

And a fitting ending for a long, strange trip.