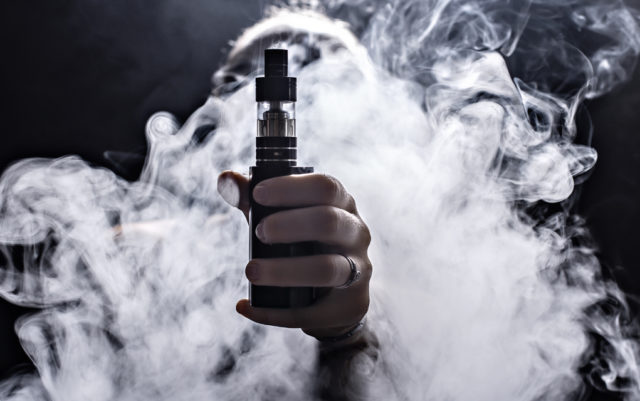 The plot thickens. Or thins, as the case may be.

When cases of lung damage and death associated with vaping started to turn up earlier this year, it didn’t take investigators at the federal Centers for Disease Control long to finger Vitamin E acetate as a, uh, “compound of interest.”

Vitamin E is a nutrient, and taking it orally and in food has health benefits. But inhaling it in vapor form can cause lung damage.

The CDC initially found that Vitamin E acetate was being used as a thickening agent in some vapes, especially in some being made and sold illicitly. That put the compound on the suspect list, but didn’t make the case.

However, new evidence forges a much stronger link. The CDC received fluid samples from the lungs of some of the 2,000 patients affected in 10 different states (about 40 of whom had died). It says all of those samples — 100% — contained Vitamin E acetate.

CDC’s James Pirkle said that the mechanism by which Vitamin E acetate damages the lung tissue remains unclear, but that the compound is “enormously sticky” and could easily contribute to the sort of damage associated with the vaping malady.

The CDC also reported that 82% of the vaping products tested since the outbreak of the illness contained THC, while 62% contained nicotine — in other words, some of the vapes contained both.

Just guessing, but I wouldn’t be surprised if some of the illicitly produced THC-containing vaping products were repurposed nicotine-vaping products in which THC in an E-acetate oil was added or substituted. At any rate, the investigation is continuing.

Oh, the CDC has also put out a name — and an acronym — for the vaping-related illness. It is “e-cigarette, or vaping, product use associated lung injury” or “EVALI”.

South Dakota isn’t the only state where marijuana reform activists are trying to petition recreational marijuana legalization onto the ballot.

Three different groups of Florida activists are trying as well, but all of them are facing a really heavy lift.

Under Florida law, a petition seeking to amend the state constitution has to clear hurdles. First, the petitioners have to submit more than 76,000 verified signatures. Once this is done, a state-level judicial and financial impact review takes place. After that, the petitioners need to have a total of 766,200 signatures certified by the state elections office by Feb. 1, 2020.

So far, only one of the three groups has passed the 76,000 signature milestone. The group, Regulate Florida, has collected 92,562 signatures and qualified its petition for the judicial and financial impact review step.

The Regulate Florida petition seeks to establish 21 as the legal age at which someone can grow and use marijuana. The initiative also directs the state to adopt regulations for licensing marijuana grows, marijuana product manufacturing operations and dispensaries. The initiative would also allow Floridians to grow pot at home.

A second group, Make It Legal Florida, has collected 69,080 signatures for a separate proposal, while a third group, Floridians for Freedom, has 21,430 signatures on a third proposal.

All three groups would seem to have an impossibly daunting task ahead of them, except for one thing: It is possible for Floridians to sign an initiative petition on-line, which means they will not have to recruit the thousands of signature gatherers it would take to collect more than three-quarters of a million certified signatures by Feb. 1. Still, it is going to take a major effort to get a recreational marijuana legalization initiative on the ballot in the Sunshine State for 2020.