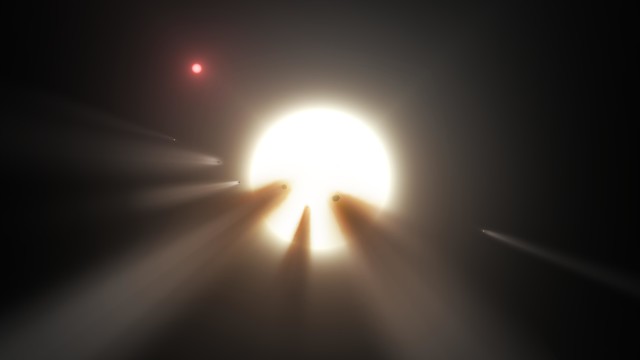 In 1960, physicist Freeman Dyson suggested that the energy demands of all technological civilizations would eventually exceed the natural resources of their home planet. Continued development would require that they build enormous structures in space to capture more of the energy released by their sun, a concept now known as a Dyson sphere.

Such structures might be found if they temporarily blocked some starlight, or if they glowed with excess heat. Combing through observations from NASA’s Kepler space telescope, astronomers at Yale University recently found a mysterious signal they can’t yet explain, and the internet is buzzing with the idea that it might be an alien megastructure.

For the past several years, Tabetha Boyajian has helped organize the efforts of astronomy enthusiasts through Yale’s Planet Hunters project.

The idea was to enlist thousands of eyeballs to look for interesting signals from the 150,000 stars that the Kepler telescope was searching for planets. The Kepler team used computer algorithms to sift through all of the observations, so Planet Hunters was a hedge against the possibility that the computers might miss something interesting. The algorithms were great at finding the expected signals, but they were no match for the human brain when it came to finding the unexpected.

Kepler measured the brightness of each target star every half hour for four years. A few percent of the targets showed the expected signal, small dips in light that appeared when a planet passed in front of the star for several hours during each orbit. The rest of the targets showed myriad ways that stars can change their brightness over time, from explosions and flares to spots and pulsations. But one star defied categorization: KIC 8462852, also known as Tabby’s star.

For most of the four years its brightness stayed remarkably constant, until halfway through the mission when 15 percent of the light disappeared for nearly a week. Just before the end of the mission it happened again, with several large dips spread over a few months.

Whatever blocked the starlight was too big and too irregular to be a planet. Jupiter would only cover 1 percent of the sun’s light, and it would create the same dip at regular intervals for each orbit.

Boyajian and her team recently published a scientific paper outlining the evidence for and against the many possible explanations. Their best guess is that it may have been a swarm of comets, but they still can’t rule out an alien megastructure. To unravel this mystery they need more observations, but Kepler stopped monitoring the star in 2013.

“The fact that the star is varying in brightness unpredictably suggests that you’d really like to watch it as continuously as you can,” says Tim Brown, principal scientist for the Las Cumbres Observatory Global Telescope (LCOGT) network. Brown moved to Boulder in 1972 for graduate studies in astrophysics at the University of Colorado. He spent most of his career working at NCAR, until a unique opportunity arose in 2006.

An old friend had recently retired from a highly successful career working for several technology companies, and he dreamed of building a robotic observatory with telescopes all around the planet. Brown spent the next seven years turning that dream into a reality.

LCOGT now has 18 robotic telescopes on six continents, and operates them as a single scientific instrument. “If you have something that changes with time, then we’re interested,” Brown says. Traditional observatories are ill-equipped to study time-variable phenomena. Brown suggests an analogy with a dentist’s office: You set up an appointment six months in advance, show up on the specified day and get the work done. But LCOGT is more like a fast food restaurant: You show up whenever you like, order what you want, and get it almost immediately.

Although it was originally conceived as a private facility, LCOGT now sells some of its telescope time to other astronomers who need its unique capabilities. Users simply specify what observations they want and when they should be executed. The request is submitted to an automated queue system, and a notification is sent by email when the observations are completed.
With observatories all around the globe, there are always telescopes under dark skies. As long as it isn’t cloudy, observations are happening 24/7.

If you need to measure the brightness of a star once a day for a few years, LCOGT is pretty much the only facility that can do it.
Which brings us back to Tabby’s star. Boyajian and her team are launching a Kickstarter campaign in early May. Their goal is to raise funds for telescope time on LCOGT. The idea is to keep an eye on the brightness of KIC 8462852, searching for additional dips that may identify the source of the mysterious signal found by the Kepler telescope.

“Almost everybody is interested in what’s going on in the sky at an instinctive level,” Brown says. “If you can find a way to harness that natural interest and gather a few pennies from everybody who owns an iPhone, it would make a huge difference in the funding picture for astronomy.”

Planet Hunters crowd-sourced the discovery of the most mysterious star in the galaxy, and now Boyajian will crowd-fund new observations with LCOGT to find out whether it is surrounded by a swarm of comets or an alien megastructure. Even Freeman Dyson would be impressed by the convergence of technologies that made all of this possible.

Travis Metcalfe, Ph.D., is a researcher and science communicator based in Boulder, Colorado. His nonprofit organization accepts contributions to support future Lab Notes columns at labnotes.whitedwarf.org