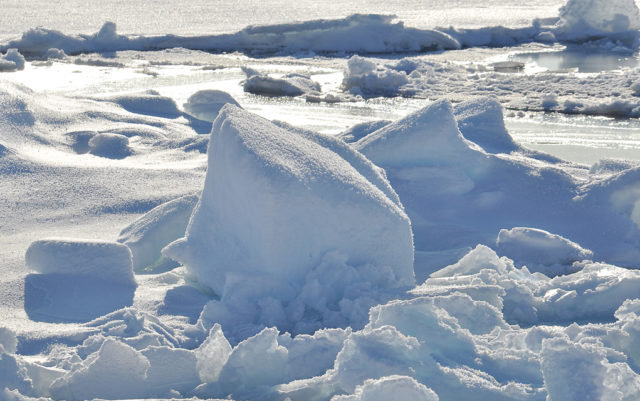 In late September, Swedish activist Greta Thunberg led the largest global climate strike in history, inspiring 7.6 million people in 185 countries to urge world leaders to take action against climate change. Two days before the mobilization began, at the end of the Arctic melt season, sea ice extent (a measurement of the ocean where there is at least some ice) was at the second lowest level on record. Scientists from the National Snow and Ice Data Center (NSIDC) in Boulder have been tracking Arctic sea ice since modern satellite observations began in 1979.

The polar regions of the Earth provide an early warning system for the future of climate change on our planet. While global average temperatures have increased about 1 degree Celsius since the industrial revolution, the poles have warmed about three times faster. Melting ice is the reason for the accelerated change at the poles, something that scientists refer to as a reinforcing feedback mechanism.

Before the planet began to warm, bright polar ice reflected much of the energy from the Sun back into space. As temperatures started to rise, melting ice exposed the darker sea below, which absorbed more of the incoming solar energy. The resulting rise in sea temperatures melted even more of the ice, decreasing the reflectivity further and absorbing a higher fraction of the incoming energy over time. The warmer the planet becomes, the faster it gets warmer near the poles.

“I’ve watched the Arctic radically transform from an environment that the explorers of the 18th and 19th centuries would have been very familiar with, to something very different today,” says Mark Serreze, director of NSIDC and a distinguished professor in the Department of Geography at the University of Colorado.

Serreze moved to Boulder in 1986 for doctoral studies in Arctic sea ice variability. He has traveled to the Arctic more than a dozen times for field work, starting in the early 1980s and most recently this year. Two of the small ice caps that he studied early in his career have now disappeared. The annual sea ice minimum in September has gone from covering an area of about 7 million square kilometers during his first visit, to just over 4 million square kilometers today. He recently wrote a book called Brave New Arctic: The Untold Story of the Melting North, which recounts what he has witnessed in his career as a polar scientist.

“It’s kind of a wild ride through 30-some years of research,” he says.

Much of the long record of Arctic sea ice measurements owes its existence to spy satellites operated by the U.S. Department of Defense. Starting in the 1960s, the Air Force Space Command managed a series of imaging satellites that passed over the north and south poles following the day-night line. With an orbital period of 100 minutes, the satellites could observe the entire surface of the Earth twice a day, a capability that was particularly useful for military reconnaissance and surveillance.

But it also produced a vast quantity of data over the polar regions. The program was declassified in the early 1970s, making the data available to the scientific community.

In addition to their imaging capabilities, the satellites eventually carried instruments that could measure microwave radiation. The crystal structure of ice emits a very specific signature in microwaves that is not present in liquid water, and it can be measured through clouds in daytime or at night. This allowed the satellites to make daily observations of the total area covered by sea ice, and these measurements have continued for decades.

“In the early 1990s we first started to see it change, but we really weren’t clear what was happening,” recalls Serreze. “What we’re seeing is that we’re not just losing the extent of ice, it’s getting thinner as well.”

Since modern satellite measurements began in 1979, the Arctic sea ice minimum in September has grown smaller by about 13% each decade. There are variations from year to year caused by random fluctuations in the weather, but the overall trend is unambiguously downward. A record low occurred in 2012, when Arctic sea ice covered just 3.39 million square kilometers.

Through most of this summer, the gradual decline in sea ice closely followed the trajectory of 2012, even tracking slightly below it in late July and early August. But in mid-August the annual melt diverged from the 2012 path and eventually reached the second lowest minimum on record.

By the time kids born in the next few years reach Thunberg’s age, the Arctic will likely be ice-free in September. Shipping companies will enjoy a shortcut between Asia and Europe, and the fossil fuel industry will be salivating at the prospects for new oil exploration. By then, the planet could be straining under the weight of a human population approaching 9 billion. Considering who loses the most from inaction, it’s easy to understand why younger people are leading the fight against climate change. It may be too late to save the Arctic, but if we start now, we might still have time to save ourselves.