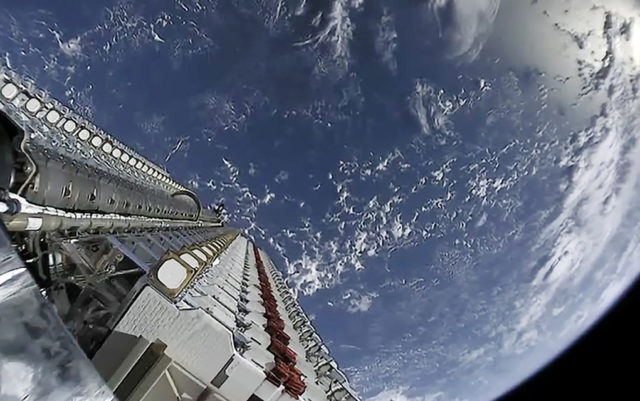 n mid-March, SpaceX launched 60 satellites into orbit 340 miles above the surface of the Earth, part of a planned global broadband internet service called Starlink. It was the sixth large batch of satellites to be delivered for the project since May 2019, and the company expects to add thousands of additional units to the network over the next several years, bringing the total to nearly 12,000 by the end of 2027.

Considering that there are currently around 2,000 satellites in orbit, there is growing concern among astronomers that future scientific observations will be spoiled by an increasingly crowded night sky.

The Starlink project is part of Elon Musk’s ambitious goal to establish a human presence on Mars within his lifetime. It’s an expensive proposition, even for the billionaire who founded both Tesla (the electric car company) and SpaceX (the reusable rocket company), among other ventures. Hoping to generate the cash to fund the Mars plans, SpaceX developed the Starlink concept to deliver broadband internet to remote areas of the planet that currently aren’t served, and to be competitive with services in existing markets. Starlink hopes to begin rolling out service in the U.S. and Canada by the end of 2020, with global coverage anticipated in 2021. By the middle of the decade, SpaceX expects $30 billion in annual revenue from Starlink, compared to just $5 billion from its launch business.

Each of the Starlink satellites weighs 500 pounds and is about the size of a table, with a much larger solar panel that unfolds after launch. Because they are so compact and stackable, SpaceX can launch 60 at a time in its Falcon-9 rocket and eventually 400 at once with the Starship rocket. Shortly after launch, as the satellites are ejected from the rocket one by one and deploy their solar arrays, they form long trains of lights moving across the sky, about as bright as the stars in the Big Dipper. Worldwide reports of UFOs spike after each launch, and the hashtag #Starlinked begins to trend on Twitter as professional astronomers complain about the satellite train drifting through the line of sight of their telescopes.

“If you do imaging with a camera and a long-term exposure, then certainly you will see streaks going through your picture,” says Meinte Veldhuis, president of the Little Thompson Observatory (LTO) in Berthoud.

Veldhuis moved to Colorado from the Netherlands in 1978 for an internship at Ball Aerospace, where he continued to work as a program manager until 2005 on projects including the Hubble space telescope. In 1996, he and a dedicated group of volunteers in Berthoud established LTO at the local high school to help get students interested in science and math. On the third Friday of every month, they host a public star night with a short presentation followed by telescope viewing, a program that has served more than 78,000 visitors over the past 20 years. Veldhuis helped LTO establish dark sky regulations for Berthoud in 2008 and update them in 2018, so he is sensitive to the possible impact of Starlink.

When the second batch of Starlink satellites launched in November 2019, astronomers started to organize and raise concerns about the project. SpaceX insisted that the trains of bright lights after each launch were temporary, and that the satellites would gradually disperse and fade as they reached their final orbits. Even so, during the hours after sunset and before sunrise when they are not eclipsed by the Earth’s shadow, the satellites continued to be easily visible and had significant impacts on professional astronomers and night sky photographers. In response to the concerns, SpaceX gave one of the satellites a dark coating to see whether it could address the issue.

“If you paint the satellite black, that doesn’t help very much,” Veldhuis explains. “The satellite is so much smaller than the solar array, and the solar array you cannot really coat, so when the sun shines on it you can see that really well.”

Astronomers in the U.S. are particularly sensitive to Starlink because they have invested much of the past decade building a new facility to gather panoramic movies of the night sky. Starting in 2022, the Legacy Survey of Space and Time (LSST) will use a telescope mirror as wide as a tennis court with a 3,200-megapixel digital camera to gather images of the entire visible sky every night for 10 years. Among other things, LSST hopes to catalog all of the potentially dangerous asteroids in the solar system. However, with 12,000 Starlink satellites in orbit, more than 200 will be above the horizon at any given time. The LSST expects that nearly every image obtained within two hours of sunset or sunrise will contain a satellite streak, seriously compromising the observations.

“I don’t know how you would solve this. I think we’ll have to live with it,” Veldhuis says. “It’s a trade-off between business and science, and science doesn’t always win.”

From a typical suburb, you can see several hundred stars without binoculars or a telescope. By the middle of the decade, if SpaceX follows through with its current plans for Starlink, about half of the points of light you see in the sky will be moving. To remind yourself of what might be lost, visit LTO in Berthoud for a public star night, and check out heavens-above.com for predictions of when a Starlink satellite will cross the sky where you live.