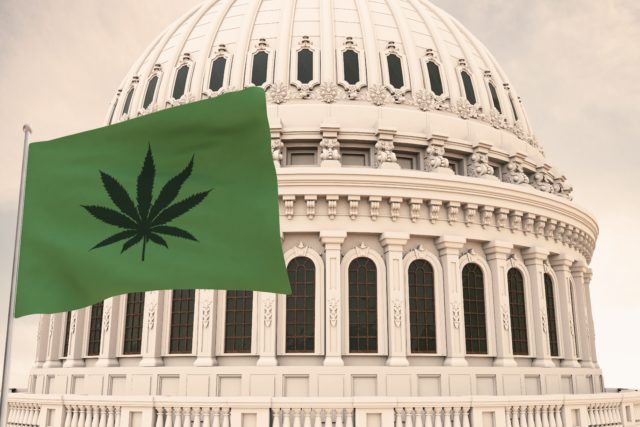 Once again, in a step some are calling “historic,” the U.S. House of Representatives voted to end the federal prohibition of cannabis by approving a new version of the Marijuana Opportunity and Reinvestment (MORE) Act on April 1. The new and improved bill includes all of its original provisions to federally deschedule cannabis and address the toll prohibition has taken on communities of color, and includes two new provisions to provide funding for marijuana research for the National Highway Traffic Safety Administration and the National Institute for Occupational Safety and Health.

It would herald a new era in America, for cannabis and for justice. However, now the ball’s in the Senate’s court. Because while this bill has passed in the House twice now, the bill has already stalled in the Senate once.

“For far too long, we have treated marijuana as a criminal justice problem, instead of as a matter of personal choice and public health,” Representative Jerry Nadler of New York, who introduced the bill, said in a statement on the House floor. “Whatever one’s views are on the use of marijuana for recreational or medicinal use, the policy of arrest, prosecution and incarceration at the federal level has proven both unwise and unjust.”

According to Forbes, there are 40,000 people currently incarcerated in the U.S. for cannabis crimes. Those Americans, many of whom are of African American or Latin American descent, are behind bars even in states that have legalized cannabis. And all of them (at least those with drug felonies on their records) will struggle to find employment for the rest of their lives.

The MORE Act aims to address that.

In the broadest terms: The act would remove marijuana from the list of scheduled substances under the Controlled Substances Act, and reverse decades of failed federal policies based on the criminalization of cannabis.

More specifically, MORE will decriminalize cannabis at a federal level, leaving it up to individual states to decide how they regulate it. Cannabis products would be subjected to a federal excise tax of 5%—increasing over five years to 8%. Nobody could be denied public benefits based on cannabis use or possession. People could no longer be penalized under federal immigration laws for any cannabis crimes. It would create a process for expungement of past cannabis convictions. A Community Reinvestment Grant Program would fund nonprofit community organizations to provide services for individuals adversely impacted by the war on drugs; including job training, reentry services, legal aid for civil and criminal cases (including for expungement of cannabis convictions). The MORE Act would also support funding for substance misuse treatment for minority communities, fund loans for businesses owned by people affected by the war on drugs, create incentives for states to promote equity in legal cannabis markets, and would also impose certain labeling and packaging requirements among other provisions.

The new provisions, just added this session, would provide $10 million in research funds for the National Highway Traffic Safety Administration to conduct studies on “technologies and methods that law enforcement may use to determine whether a driver is impaired by marijuana.” It also requires the National Institute for Occupational Safety and Health conduct research on how legalization might affect the workplace and develop “best practices for use by employers that are transitioning their policies related to the use of recreational cannabis.”

Importantly, this legislation also mandates that all references to marijuana under federal statute are changed to cannabis. (For the uninitiated, the word marijuana, or marihuana—which is likely derived from the Native Mexican-American word for “prisoner,” mallihuan—was adopted by the federal government in the 1930s because it sounded scarier than the plant’s actual name, cannabis sativa.) However, it’s unclear if that provision would apply to the act itself, changing MORE to CORE.

If passed into law, the MORE Act would be a tectonic shift in the American saga of cannabis. It could undo some of the damage that the failed war on drugs has caused communities, families and individuals around the county. It isn’t just cannabis legalization legislation—it’s partly crafted like a reparation bill.

But that’s a big if. Forgive the cynicism, but even with a Democrat-controlled Senate, the MORE Act now faces an uphill battle. Not just because it would need 60 votes to pass (and not every Senate Democrat supports legalization), but because it’s competing with several other cannabis bills, sponsored by other legislators. Nancy Mace (R-NC) introduced the States Reform Act in 2021, the first comprehensive Republican bill to end cannabis prohibition, which some anticipate will have its own hearing this month. And Senate Majority Leader Chuck Schumer (D-NY) and senators Cory Booker (D-NJ) and Ron Wyden (D-OR) are expected to be introducing their wish-list decriminalization bill, the Cannabis Administration and Opportunity Act (Weed Between the Lines, “A progressive wish list,” July 22, 2021) later this month as well.

I hope I’m wrong and the skepticism is misplaced. But if history is any indicator, lots of hullabaloo gets drummed up around cannabis legislation on Capitol Hill every April, and so far none of it has really gone anywhere.