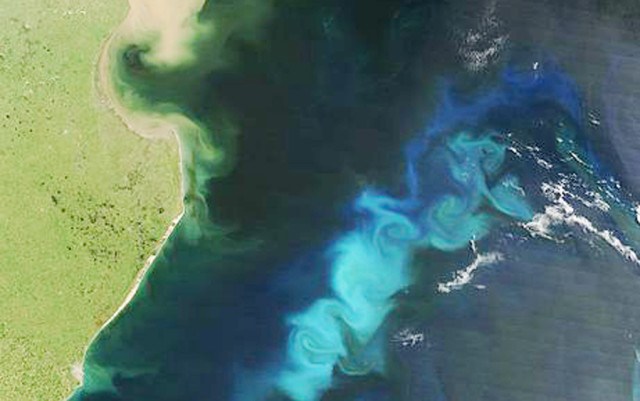 Last month at a conference in Paris, 195 countries adopted a landmark agreement on how to respond to the Earth’s changing climate. The agreement included an ambitious goal to prevent the average global temperature from rising more than 1.5 degrees Celsius (2.7 degrees Fahrenheit) above pre-industrial levels.

Prior to the conference, most of the countries had submitted pledges outlining how much they intended to reduce their emissions of heat-trapping pollution beginning in 2020. They also agreed to assess and revise their national plans every five years, an essential step given that the existing pledges are insufficient to achieve the 1.5-degree goal.
The challenges laid out in the “Paris Declaration” can be addressed with aggressive investments in renewable energy technologies. But if we fail to act quickly, we may also need to evaluate strategies for artificially cooling the planet until our transition away from fossil fuel begins to help.

Since the industrial revolution, the average global temperature has increased by about 1 degree Celsius (1.8 degrees Fahrenheit). The collective actions of several generations resulted in the release of so much heat-trapping pollution that it exceeded the capacity of the Earth’s oceans and forests to absorb it. The surplus pollution from each year remains in the atmosphere, and commits humanity to some amount of climate change for as long as it takes the planet to work through the accumulated excess.

Even if we eliminated all human-induced sources of this pollution right now, the globewould continue to warm for at least the next 50 years.

Our decisions about how to respond to the threat of climate change will only affect “how much” warmer the planet will get, and “how long” it will take to return to its natural temperature for future generations. The good news is that most scientists believe it is still possible to reverse climate change, and the required transition can be made gradually over several decades.

Doug Arent is a scientist at the National Renewable Energy Laboratory (NREL) in Golden. He was born and raised in Colorado, and remembers when Jimmy Carter established what was then called the Solar Energy Research Institute in 1977.
“I’ve focused my whole career on clean energy and sustainability,” he says. Arent watched intently on Nov. 29 when, on the opening day of the climate conference in Paris, President Obama announced that 20 countries including the United States would double their public funding for renewable energy research and development over the next five years. At the same time, Microsoft cofounder Bill Gates introduced the “Breakthrough Energy Coalition,” a private group that promised to invest billions of dollars of their own money in renewable energy technologies.

A company in Arizona is developing one example of the next-generation renewable energy that might benefit from this expansion in public and private investment. REhnu Solar manufactures large mirrors that track the sun and concentrate its light onto small solar cells that are extremely efficient but relatively expensive.

“That’s a technology that NREL has been involved with for decades,” Arent says. Each module can produce as much electricity as three rooftop solar panels, but it also functions as a solar water heater by recycling heat generated by the concentrated sunlight.
The current design mounts up to eight mirrors on each sun-tracking platform. These high-efficiency solar cells are constantly improving, so the modules at the focus of each mirror are designed to be replaceable. Using this technology, it is easy to imagine large areas of the Arizona desert converted into inexpensive solar electricity farms, displacing power plants that burn fossil fuel.

Ideally, we will transition away from fossil fuel quickly enough to avoid the most serious consequences of climate change. But considering the extreme weather events that have already resulted from the current level of warming, we might also want a backup plan.
Simone Tilmes is a scientist at the National Center for Atmospheric Research (NCAR), where she studies the impacts of “climate engineering” — strategies that artificially counter the warming effect of excess heat-trapping pollution in the atmosphere. The idea of climate engineering emerged from observations of volcanic eruptions, which push tiny particles into the upper atmosphere that have a temporary cooling effect on the planet. Essentially, these particles prevent some of the incoming sunlight from reaching the surface of the Earth.

Tilmes and her colleagues use computer models to examine how the climate system might react to a slightly fainter sun. She emphasizes that such measures should be seen as transitional strategies to help regulate the temperature of the planet in the short-term. But they aren’t a substitute for addressing the root causes of the problem.
Another concept for engineering the climate involves artificially enhancing the capacity of the ocean to absorb heat-trapping pollution. Small-scale experiments have already been performed, seeding the ocean with iron to stimulate the growth of microscopic plants that capture carbon dioxide and release oxygen.

A more extreme option proposes to release genetically engineered bacteria into the oceans, which have been specifically designed to absorb global warming gases. All of these strategies raise the questions of who will decide which options — if any — should be used, and what level of climate disruption would justify such an emergency response.
There is now a broad consensus that the Paris agreement is a solid first step to begin addressing climate change. With public and private forces aligned to kickstart the transition to renewable energy, there is hope that we can avoid dangerous levels of warming and create a sustainable future for the next generation. But it is comforting to know that if the transition is too slow, or if the projections are wrong, scientists are also developing options for a climate intervention.

Travis Metcalfe, Ph.D., is a researcher and science communicator based in Boulder, Colorado. If you so desire, you may make a tax-deductible contribution to support future Lab Notes columns at labnotes.whitedwarf.org