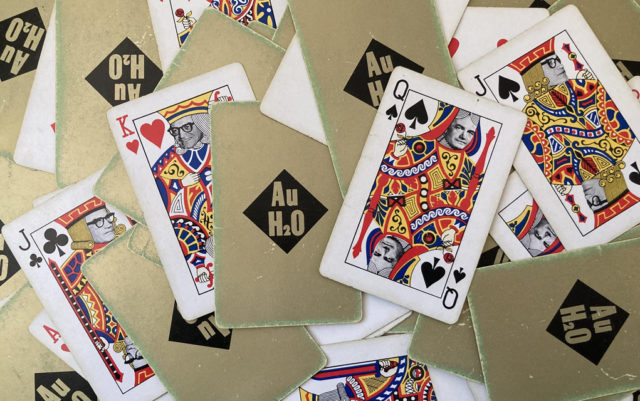 The side table drawer in my grandparent’s Arizona living room was always full of playing cards. There was the deck with Van Gogh’s self-portrait, his ear cut off, and another with his wheat fields. There were decks from England and Germany and other far-off places my grandma traveled. There were multiple decks with sailboats, and the mini Snoopy deck that my mom had as a kid. But the deck I always looked for, the one I always wanted to use, was gold. Stored in a pristine cardboard box, the back of each card was shiny with “Au H2O” framed in a black diamond. The more they were used, the more the edges of each card turned a slight hue of green, as if they really were made of gold, the oils from my cousins’ and my hands oxidizing them with each touch.

When my grandma died several years ago, just a few years after my grandpa, I ended up with the deck of gold cards, storing them away in a desk drawer, refusing to use them and wear them out more. That is until this year, when iterations of stay-at-home orders and quarantine forced me into playing more cards than I have in a long time.

“Is that an actual man’s face on the King?” a friend asked recently. Thick, black framed glasses highlight the square jaw and smile, teeth bared, as he looks off to the left. The Jack features the same face, the same glasses, but with a more serious gaze, looking to the right. “He’s on the Queen too,” the friend pointed out. This time he doesn’t have glasses, his eyes are focused straight forward, meeting mine no matter where I moved, made more haunting by his smugness, captured by his slight smirk.

The box gave no clues as to who this man was: Just a “Remembrance ® playing card” stamp, indicating these were a commemoration of someone or something. But the symbols encased in the black diamond: Au H2O… Goldwater.

“Barry Goldwater? Wasn’t he a racist?”

The first time I heard we had Pilgrim ancestors was sometime during college when I was mailed a flyer from the General Society of Mayflower Descendents, inviting me to join.

“Do you know about those Pilgrims?” my aunt asked when I called recently to confirm. She said it somewhat cheekily, acknowledging the repercussions of their immigration to the “New World.”

Four hundred years ago, exactly, these ancestors boarded a ship in Plymouth, England, and set sail west to escape religious persecution and find freedom — Probably? Supposedly? Maybe? Our ancestor, Richard Warren, was from Holland we know, but we’re unsure of his motivations for joining that day.

As the folklore goes, the Pilgrims were welcomed by the Wampanoag tribe, they worked hard, they survived impossible odds, they are the very foundation of this country. Or so I was always taught in school — not necessarily the legacy of oppression, even tyranny, those first Europeans brought with them. But by college I knew better. I never signed up to be part of the Mayflower Society. Nor did any of my cousins. That I know of.

My mom and her sisters, however, are a part of the society — something my grandparents made sure to do for them when they were young.

My grandpa always spoke proudly of his lineage traced back to the signing of the Magna Carta, a framed replication of the document hung in his wood-paneled office among his model cars and painted life-size portrait of his mother.

Sitting, regally, in a flowing white long-sleeved dress and wide neckline, her hands are crossed on her lap. It’s based off a photo also displayed in my grandparent’s house growing up, taken the day my great-grandmother became chaplain general of the Daughters of the American Revolution (DAR) in 1950. It’s the highest position of the lineage society, a position my great-grandmother held for three years, starting a decade after Eleanor Roosevelt famously resigned when the society refused to allow singer Marian Anderson, who was black, to perform at its Constitution Hall auditorium.

The family association with DAR died with my great-grandmother, my aunt told me. The life-size portrait from my grandpa’s office is now wrapped in a box, stored underneath my bed. No one else wanted it.

Amid catamaran rides, snorkeling and beach days, we toured the sugar cane plantations and Baldwin Missionary House as guests of honor. We were descendents of the Baldwins — my grandma’s maiden name — after all. The Baldwins — some of the first white missionaries on Maui two centuries ago. The Baldwins — subsequent generations of whom planted pineapple and sugarcane, oversaw schools where English replaced native Hawaiian languages, and ran some of the largest businesses on the island when Americans overthrew the Kingdom of Hawaii, deposing Queen Lili‘uokalani in the late 19th century. Later generations became politicians in the territory, as the white population marched the islands toward statehood.

We, all 25 of us descendents, rode a bus through the sugarcane fields, learning how our ancestors ran the mills and exported the sugar to the mainland. We toured the Missionary House, walking through the two-story building facing the harbor, the teacups laid out on the dining table. We learned about the Hawaiian Mission Children’s Society, tasked with preserving the heritage of these Protestant missionaries, and how we could all join. We posed for family photos on the steps out front, clad in Hawaiian-print shirts and dresses, crowded around our grandparents who sponsored this holiday vacation. It was 1998 — five years earlier Congress had issued an official apology recognizing the fact that Native Hawaiian people had never relinquished their right to the land. To this day (according to my aunt), the Hawaiian Mission Children’s Society never has.

Vintage books about the Baldwins are displayed on a shelf in my living room. I’ve never been back to the 50th state.

When Arizona was first called for Joe Biden early during election week, I, like President Trump, didn’t believe it. This wasn’t my grandparents’ Arizona. And it certainly wasn’t Goldwater’s, whom they supported. The longtime senator and once-presidential candidate is known for luring Hollywood actor-turned-politician Ronald Reagan to the Republican Party with his ghostwritten manifesto, The Conscience of a Conservative. When Goldwater lost the 1964 election to LBJ, it was by the largest margin in modern history. Albeit he solidified the Southern states’ Republican conversion, carrying some states with more than 80% of the votes, despite getting only 6% of the black vote nationwide. In his home state, he won by less than a percentage point.

Goldwater was one of the 27 senators who opposed the Civil Rights Act of 1964, and his campaign slogan, “In Your Heart You Know He’s Right,” according to the New Yorker’s Louis Menand in 2001, “was a clear allusion to a prejudice that dared not speak its name.”

But Goldwater wasn’t the quintessential racist of previous generations, or perhaps even the one his supporters supposed. His Civil Rights Act decision reportedly haunted him. He wasn’t a segregationist, rather a libertarian who didn’t believe the Constitution imbued Congress with the power to force states into recognizing its view of racial equality. Before becoming senator, as a Phoenix city councilman he led the effort to desegregate the city’s schools before Brown v Board of Education, and was a member of the NAACP.

Perhaps he was merely a reflection of the culture he came from; perhaps he shaped it.

Staring at Goldwater’s deck of cards recently, I can’t say I was surprised my grandparents owned them. I think I always knew (from the tidbits of history I gleaned over the years) that my ancestors were complicit, at points probably outwardly so, in creating the racial hierarchies that define this country. That was my family, those are my ancestors. No matter how many generations are between us, some part of that blood runs through my veins.

I like to think this pull is what motivated my grandma to vote for Barack Obama in 2008, although I’m pretty sure she never told anyone until after my grandpa passed in 2010. I only know because she voted for Obama again in 2012, less than six months before she passed herself. She never told me why.

As history trudges along, these distinctions often blur and morph, nuance gets lost in extremes, acts of compassion are subtly marred by outward allegiances, people are seen as walking contradictions, they often get lost in labels. Perhaps, rightfully so.

For now, the books about the white barons of Hawaii will stay on my shelf. I’ll keep using the Goldwater cards. The portrait of my great-grandmother will stay in its box under the bed. They are my stones of remembrance, remembrance of where I’ve come from, of how far I — we all — have left to go.