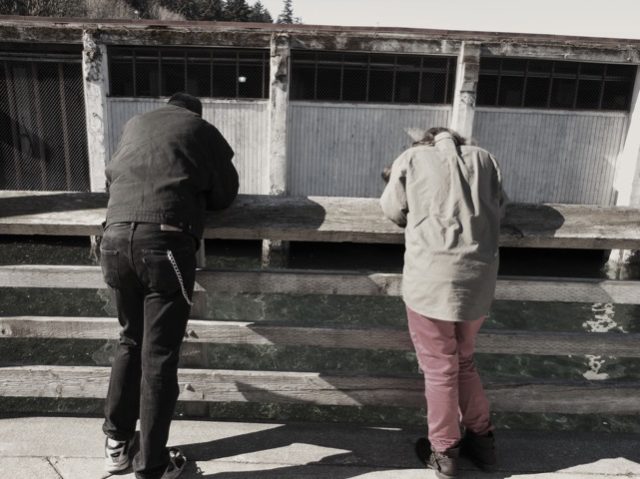 A long time ago I learned not to talk politics with my Dad. Instead we embraced a long-term and unspoken agreement to keep our conversations focused elsewhere — on card games and jokes and football, betting on every game, not to win but to fuel the fodder of our long-distance phone calls. We talked about the weather, a lot.

I became accustomed to seeing similar pleasantries from my father online, posting pictures of gardens and short movies about the lives of artists he admires like Van Gogh and Monet. He regularly offered up inspiring memes about God’s love — my Dad’s way of doing what he can to spread the gospel he hears in church every morning, deep in the countryside of rural Wisconsin.

Of course, it was football that changed all that. In August he posted a meme from Cold Dead Hands, a picture of quarterback Colin Kaepernick that read: “Colin Kaepernick refused to stand for the national anthem, saying he refuses to support a country that oppresses black people. Like and share if this privileged athlete is an ignorant disgrace to our country.”

And, just like that, the floodgates were open. Within days his timeline was full of political memes and not just about the sacred glory of the national anthem. His fervor had spread quickly as he lit social media fire after fire with his now blatant far-right antics. In one post he called Trump a savior. In the next he told Hillary supporters to “put on their big boy pants and get some tissues for your issues.” Later he ranted about the devil’s weed wasting away the minds of our country’s precious youth.

My dad says he lost about a third of his Facebook friends over the course of the following months and yet he remains totally unapologetic. He chose his words carefully, he says, he never said anything he didn’t truly believe, adding it’s a “good riddance.”

“When I was growing up, my parents would set me loose outside and tell me to be home by dark,” he told me in a recent call. “When we were out there, they didn’t protect us and you better believe nobody was there to make sure things were fair. It was on us to stay out of trouble or, when we got in it, to get ourselves out. I had to learn the hard lessons early, but too many people in this country were coddled and now they expect their mom and dad to come back like angels and make everything OK. Only God can do that and guess what? He’s got more important things to do.”

Two years ago my dad moved from Janesville, Wisconsin the wholesome hometown of Paul Ryan, to nearby Watertown, a bucolic town where neighbors escape the summer heat together in shady garages, listening to baseball games on the radio while smoking cigarettes and drinking Bud Light. On the Fourth of July, my Dad went to church where he and a few hundred others sang patriotic songs to the tune of his wife’s big brass band.

Underneath the outward and cheery patriotism, towns like these are still reeling with the loss of farming and automotive jobs and are struggling to find comparable substitutes. Even 10 years after the great recession, most of the people I know out there haven’t found a reliable way to pay the bills, and are still on some sort of government welfare, ironically relying on the programs they tend to fervently argue against. The hypocrisy is obvious and should be offensive, but for some reason I find it endearing — like, how can I be mad when their vulnerabilities are hanging out like that, so poorly disguised?

Since the coming of Donald Trump and the age of diabolical politicking, my father and I have managed to talk with a remarkable amount of civility, not because we insist on being polite or politically correct, but because we’ve both become amenable to the idea of an irreparable divide in our worldviews.

But once upon a time, my Dad was a hippie in Boulder, driving a yellow cab and performing stand-up comedy at the Nomad. Once upon a time, he smoked a lot of weed, but these days he sticks to whiskey and beer and a couple of packs a day, he tells me, boasting that he doesn’t need pot or opiates to escape his problems like everybody else — he confronts them head-on instead.

Last weekend he went to a family reunion where he ran into a dozen or so of his liberal-minded family who’d recently unfriended him on Facebook. “You know what I did?” he asks rhetorically. “I walked right up and started telling them jokes.” On the other side of the phone I rolled my eyes — in part because I know how bad his jokes can be and in part because I’ve been known to employ a similar tactic when faced with an awkward situation.

He retold one of the jokes and I responded with a light chuckle before pressing him on why he didn’t get into it with the leftists in his family — why he didn’t confront the situation head-on, like he’d learned to as a boy.

I can still hear the silence that followed. The moment was ripe with hope — hope that maybe the two of us would finally break through the walls of our differences and talk about what we were so damn afraid of. Soon though, it yielded to something more symbolic — the impenetrable impasse that stands between the right and the left, the rural and the urban, the drinkers and the smokers. Finally it broke.

“I guess because we’re family,” he said. “And when we were all standing there, face-to-face, that was all that seemed to matter.”

“You know what we did next?” he asks. You guessed it — he smoked a joint out back by the lake with his 60-year-old liberal cousins.