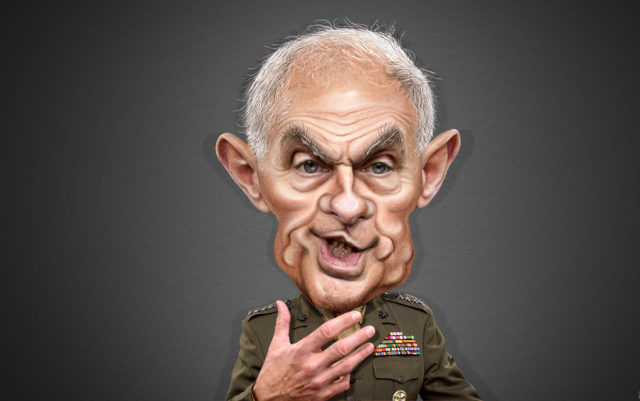 Its title was The Emperor Wears No Clothes.

And last Sunday, for a brief, shining moment, it appeared that a member of Trump’s cabinet stood up and, in so many words, said just that about the war on marijuana.

During an interview on NBC’s Meet the Press, Homeland Security Secretary John Kelly, a retired Marine Corps four-star General, was asked by host Chuck Todd if legalizing marijuana would help or hurt his work.

“Yeah, marijuana is not a factor in the drug war.”

Those three drugs, plus opiates, were responsible for the deaths of 52,000 people and cost the country $250 billion, he said.

“The trafficker’s biggest problem is not getting drugs, till now, into the United States — the biggest problem they had was laundering the money. So when you have that much profit coming out of the United States, and that profit is managed by cartels that are beyond violent… The kind of money they can offer an attorney general in Guatemala or a police chief in Mexico City, the kind of money they can offer — and if you don’t take the money they’re happy to send your youngest child’s head to your home in a plastic bag.

“The solution is not arresting a lot of users,” he continued. “The solution is a comprehensive drug demand reduction program in the United States that involves every man and woman of goodwill. And then rehabilitation. And then law enforcement. And then getting at the poppy fields and the coca fields in the south.”

So does this signal some sort of sea-change in the Trump administration regarding marijuana? Nope.

Kelly made his remarks on Sunday. By Tuesday he was walking them back:

“And let me be clear about marijuana,” he said in a speech at Georgetown University in Washington. “It is a potentially dangerous gateway drug that frequently leads to the use of harder drugs. Additionally, science tells us that it is not only psychologically addictive but can also have profound negative impact on the still developing brains of teens and up through the early 20s. Beyond that, however, its use and possession is against federal law, and until the law is changed by the U.S. Congress we in DHS are sworn to uphold all the laws on the books.”

He also referred to “vast tonnages” of pot that “TCOs” — or transnational criminal organizations — move across the border from Mexico.

Wow, from marijuana “not a factor” in the drug war to “vast tonnages” of marijuana being moved across the Mexican border by “transnational criminal organizations” – in the space of 48 hours.

In other words, Kelly’s Sunday comments were what former New Republic Editor Michael Kinsley once famously called a Washington Gaffe, which is when someone inside the Beltway accidentally tells the truth, “some obvious truth he isn’t supposed to say.”

The truth is that the war on marijuana has been the heart and soul of the drug war since 1937. That’s a big part of the reason that the drug war has been such a breath-taking failure.

By conflating marijuana, which is hands down the safest of all recreational drugs, legal and illegal (and safer than most prescription drugs for that matter), the feds destroyed the integrity and legitimacy of the drug war in the eyes of tens of millions of Americans. And misdirected hundreds of billions of dollars into fighting marijuana.

If the Trump administration wants to have any realistic chance of winning its forthcoming war on drugs, opiod edition, it needs to start by decoupling it from marijuana.