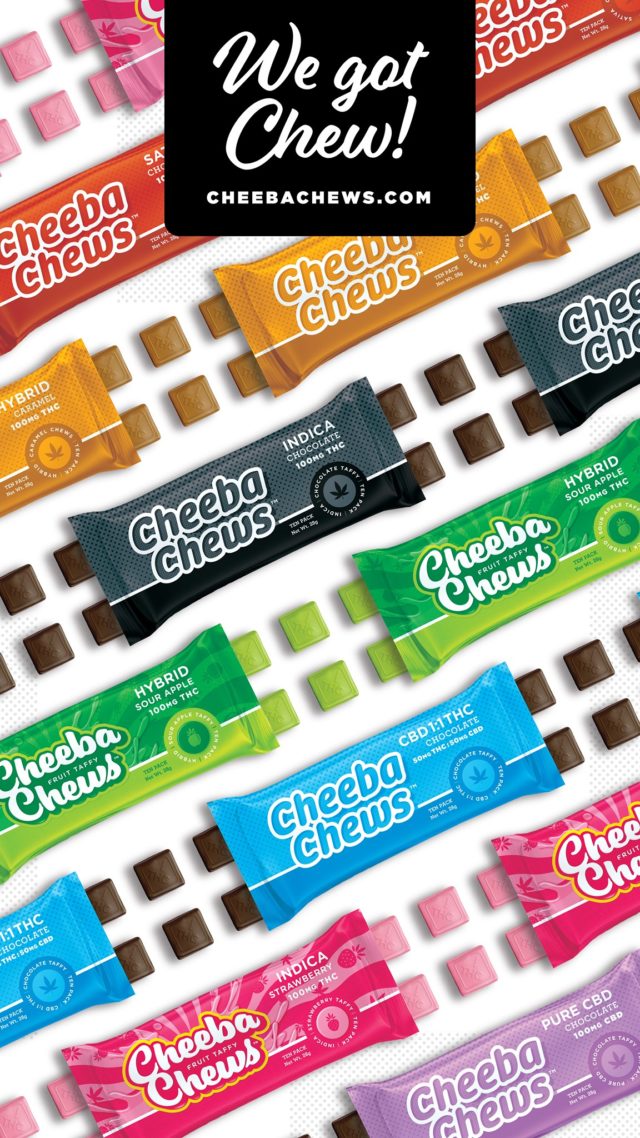 In the Cheeba Chews laboratory in Denver, Cheeba’s resident infuser is sprinkling high-quality THC isolate over a tray of chocolate taffy, stirring it in by hand with a silicone spatula. Ryan Kilpatrick explains that every single batch of Cheeba Chews is hand mixed like this.

“We tried automating it at one point,” Kilpatrick says, “but the homogeneity just wasn’t there.”

Local cannabis users will remember Cheeba Chews as one of the original commercial edibles to hit cannabis shelves in Colorado. The company started in 2009 making its infamous double-, quad– and deca-dose taffys—back in the days when aspiring entrepreneurs could make commercial edibles in their own
home kitchens.

It’s been almost 14 years since those early days and humble origins, and now Cheeba Chews is operating out of a highly advanced laboratory reminiscent of Willy Wonka’s chocolate factory. Custom machines dollop taffy into pre-portioned cartons, sealing and packaging the product on an assembly line, while dedicated employees facilitate production and quality control, turning out enough Cheeba Chews to supply the entire state. For over a decade Cheeba Chews has used the same type of solvent-free distillate to infuse their chews.

Until recently, Kilpatrick explains. In December 2021, the company decided to mix things up with a new line of candies infused with solventless ice-water extracted rosin. Instead of using the much cheaper, much easier to obtain solvent-free distillate, Cheeba’s new live rosin products provide a cleaner, more potent high that highlights the terpene flavors of the cannabis bud it came from. Cheeba isn’t the first edible company to hop on this new rosin trend, but it’s making damn sure it isn’t the last aboard. Because, as Kilpatrick explains, rosin is where the edible industry is headed. It’s that much better.

“When we started playing with rosin about a year and a half ago, we started testing it and we saw the effects, benefits, the difference between rosin versus the standard distillate, and we jumped into the deep end,” Kilpatrick says. “We’re like, ‘We need to put this in everything.’”

Rosin, for the uninitiated, is a very different cannabis product from resin. Resin (with an E) is “solvent free,” and requires the application of a chemical solvent like butane, ethanol, propane or carbon dioxide. Solvents use heat and pressure to essentially dissolve the plant matter of bud, leaving behind the sticky distillate that’s been the standard in edibles for decades.

Rosin (with an O) is solventless, meaning it never comes into contact with a chemical solvent and is made via an ice-water extraction. It’s a time and effort intensive technique that uses cold water to make the trichomes brittle and break off of the plant, sinking to the bottom of a bucket where a series of mesh filters catch them. The residue scraped off of those filters is called “bubble hash” and can be pressed into rosin.

Many attribute Mila Jansen (known colloquially as “The Hash Queen”) with the breakthrough in cannabis extract technology sometime in the late 1990s. But it remained a relatively exotic form of extract for many years, since it requires significantly more time and effort than solvent-free extractions.

Since legalization, though, ice water extractions have exploded in popularity. Not only are they far safer to make (less actual explosions when you aren’t using flammable gasses), but they’re also organic and free of all the residual chemicals that distillates often retain even after they’re purified. These days, any dispensary worth its salt will carry some form of bubble-hash or solventless rosin. But it wasn’t until 2020 when someone had the idea to use the stuff in commercial edibles.

Colorado’s own Dialed In… Gummies was the first to do that. Jason Manegold had an idea to source excess plant material (i.e., trim, shake, bud) from producers who would otherwise throw it away. He then makes his own rosin from that to infuse Dialed In’s gummies, sharing the credit on his labels with whoever grew the flower.

Manegold says he feels like he changed everything about edibles in Colorado. And if the actions of some of the biggest edible companies in the country are any gauge, he might be right. Wana launched its own fast-acting live rosin gummy in 2022, and of course Cheeba Chews launched its at the very tail end of 2021.

“[Dialed In] was the first company to do this,” Manegold says. “The rosin edible is our thing … the rest of the industry is just kind of copying us, essentially.”

You can almost hear the spirit of competition in Manegold’s voice. A spirit that’s benefiting consumers at the end of the day, as edible companies like these start infusing their products with higher-end cannabis extracts.

Unlike Dialed In, Cheeba doesn’t make its own rosin, but sources it from rosin makers who have excess product. Cheeba includes the terpene profiles of what strains went into the rosin on its rosin candy labels, so consumers can shop more accurately based on preference (Weed Between the Lines, “The wrong labels,” May 26, 2022). Cheeba is also experimenting with other additives to infuse confections with, like CBN, CBD, and melatonin for its “Sleepy Time” gummies; or THCV and caffeine for its “Charged Energy” chews. Or try Cheeba’s brand new MELTS line of pate de fruit chews confectioneries.

It’s all part of the new wave of edibles, Kilpatrick says. Rosin infusions are changing how edible companies approach their recipes, and it’s changing consumer preferences too. Kilpatrick himself admits that the live rosin taffy have become his new favorite Cheeba
Chews product.

“I eat all of our products, but the rosin ones are just so much better,” Kilpatrick says. “Gimme anything with rosin in it.”