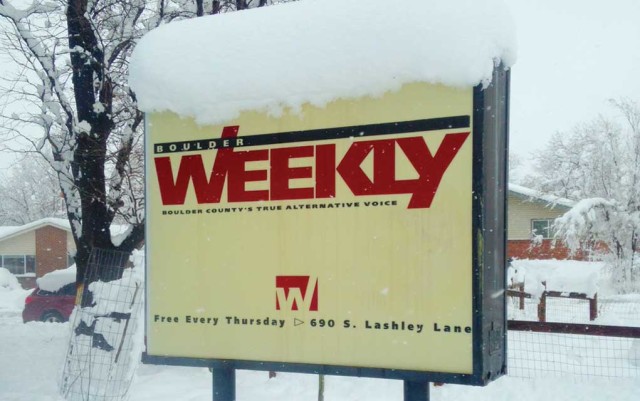 In case you missed it, it snowed like 2 feet on Wednesday and a bunch of roads throughout Boulder County were closed. We don’t know how you would’ve missed it, unless you were living under an igloo!

We weren’t going to come into the office to put out this week’s paper but we didn’t want to be flakes! Like, snow… flakes.
Speaking of chilly receptions, we haven’t seen this much hullaballoo about the snow since we heard about the exile of Edward Snow… den. Hoy!

And speaking of major breaches of public trust by the federal government, we’re wondering when Obama’s going to bail out the banks again… the snow banks! Oh boy! Ha ha!

It was easy on a day like Wednesday to stare out the window and feel isolated. Existentially trapped. Puns about the snow and hackneyed jokes were the only tools we had at our disposal to pick our way out of despondency. Our polite laughs were echoless in the cave of snow, whose walls grew higher as the light of sun grew darker in the afternoon. That’s when we noticed our door had been shuttered by a snow drift, and the food supply had dwindled to one solitary fun size Snickers bar.

What cruel, prescient bastards had coined the term “fun” for a food so low in sustenance but such the envy of our collective souls — for the only thing “fun” about the proceeding chaos was a perverse sense of accomplishment in subduing your feeble and weak co-workers, who meekly called for temerity and pity, of which you had none to spare as you wonder which poor soul you’ll eat at suppertime first.

Women deserve absolute equality to men in the workplace.
And at Amazon, the Internet store that has driven more local businesses to extinction than any other single entity in history, equality is exactly what the company provides.

Just this week, an activist investor in the massive corporation, founded by Jeff Bezos, demanded proof that women in the workplace were being paid as much as their male counterparts. The company says it checked all its records and it turns out that women and men are being treated the same even when it comes to pay.

Now that sounds good on the surface, but you have to remember a couple of things about the Amazon business model. It has been widely reported that the company’s warehouses are a living hell to work in. The company won’t cool them because that costs too much, so instead, it actually pays to have an ambulance stationed outside to haul away employees after they collapse.

The point being, all the recent praise for Amazon around its claim of equal treatment for the genders may be missing the point. It’s a little like Oklahoma bragging that it uses the same malfunctioning drug cocktail for its executions of both men and women.

Equally bad and equality are not the same thing. Equally rancid working conditions for both genders should not be the goal of any company or investor. Turn on the air conditioner, and then you can boast.