Finding a new house, in a new city, while trying to manage a new job can be a bitch. Not to mention the increasing anxiety brought on by the possibility of your new neighbors — who they might be, what they might believe, and how they might behave at the annual block party.

Now just imagine if you decide to move in next door (or maybe a few blocks away) from the guy your new boss is replacing, the boss who also actually hired you and asked you to find the new house, in the new city so you can manage the new job he has for you. Can you say awkward? 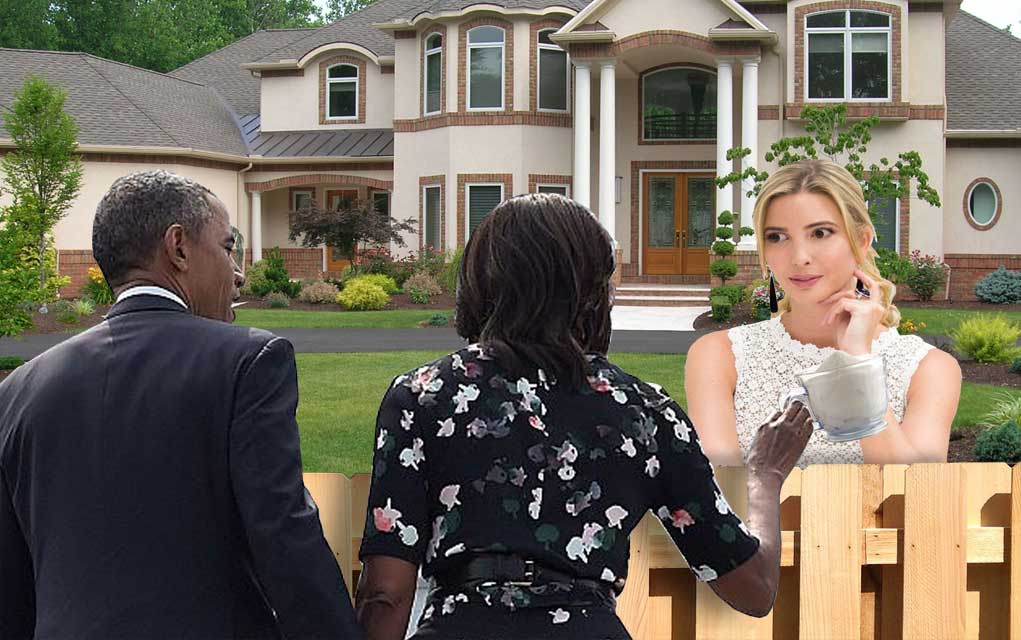 This is apparently the fate awaiting Ivanka Trump and her husband, Jared Kushner. President-elect Donald Trump’s daughter and son-in-law are reportedly moving into the Kalorama neighborhood in Washington D.C., a mere few blocks away from where the outgoing First Family are slated to move Jan. 21, or thereabouts. While Barack and Michelle Obama are the first President and First Lady to stay in D.C. post-White House since Woodrow Wilson in 1921, Ivanka is the first, First Daughter to move in next door to a former president. We’re almost sure about that.

Although the First Daughter has not been appointed a position in her father’s administration, DT has repeatedly said he’d like it if both Ivanka and Jared become a formal part of his team.

All of this leaves us with only a few questions:

1) Will Ivanka ask Sasha to babysit her three small children for state dinners, White House parties and other such festivities?

2) Will Ivanka knock on Michelle’s door when she’s in need of a cup of sugar?

3) Will Barack ever steam open Ivanka’s mail “just to see” what something says?

4) Who’s going to be the first neighbor to prank the other? A little TPing? Or maybe ding-dong ditching? Or even lighting some of Bo’s poop on fire?

5) And lastly, how do we get an invite to the block party?

Everything we know is a lie

It’s the New Year and already everything we know is a lie. While liberals cling to the final few days before the orange cloud of doom moves into the White House, they desperately hope that all the conspiracies are true and the election was rigged and the country will be handed to the person who truly deserves to run it — Bernie Sanders. But that’s a conspiracy we’re still waiting on.

The new hot lie that’s being uncovered is about the topically relevant disaster that happened over a century ago. Apparently the iceberg isn’t the only thing that sank the Titanic. In the new hour-long documentary Titanic: The New Evidence, researchers discovered a coal fire was also to blame for the ship’s demise, which killed more than 1,500 of the 2,224 passengers aboard. It seems as though the ship’s creators used low-quality materials and shortcuts to build the ship, which surely was the language they used in their ad, “Cross the Atlantic in the Titanic: both CHEAP and SUBSTANDARD! Buy your ticket today!”

The Titanic’s low budget, corner-cutting procedures will, no doubt, serve as inspiration for Trump’s administration. We’ll just have to wait and see what scapegoat/iceberg Trump blames for the downfall of America.