The United States of Happy

The polling numbers are in, and no, we’re not talking about presidential approval ratings, which are at a record low after only a handful of days in office… You don’t say!

We’re talking about the annual survey of well-being done by Gallup-Healthways. And who takes the cake for happiest state in all the union? We’ll give you one guess.

Yep, it’s Hawaii. While it’s not surprising the state got top honors — for the sixth year in a row, nonetheless — we’re thinking it’s not the fairest of fights… The islands are roughly 4,750 miles away from our nation’s capital. While The Aloha State is still within the tiny grasp of our fear-flaming leader, we’re guessing palm trees, beaches, turtles and leis make him more tolerable.

Weirdly, the runner up is the second farthest state away from Washington D.C. (which probably stands for Donald Country now, we’re guessing): Alaska. Now, come on.

Funnily enough, California, the state desperately trying to secede from the trash fire that is currently our country, did not place in the top 10. Maybe instead of seceding they should try to become part of Hawaii or Alaska? Seems like an easier compromise.

We gotta admit, we’re jealous that Hawaii continues to float in the middle of the ocean thousands of miles away from Donald, Mike or Steve — The Un-Holy Trinity. Truthfully, it sounds kinda nice.

Colorado can only distance itself so much. But we did manage to come in fifth in well-being. So hey, take comfort that there are 45 states that are less happy than we are. Sorry, not sorry, California.

The world is getting crazy out there. In addition to war, famine, natural disasters, the refugee crisis and megalomaniac (new) world leaders, the general public now finds itself second-guessing anything we’ve ever been told. When the President of the free world and his cronies question truth by purporting “alternative facts,” what else are we to do? Is the world really round? Did Elvis really die? Did Obama really go to Harvard Law School? Are the Broncos really not going to the Super Bowl? 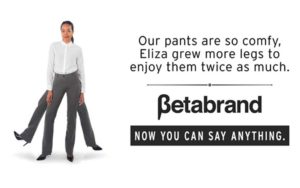 In a world of alternative facts, anything is possible. And the new U.S. policy on truth is giving companies license to oversell their products like never before. In the U.K., Dove Deodorant took out a two-page ad in The Guardian and other publications this week, doing just that. “New Dove Antiperspirant was first used by Cleopatra” one line of the ad says. Another line reads, “New Dove Antiperspirant boosts your Wi-Fi signal.” The ad also uses the hashtag #AlternativeFacts, not so subtly capitalizing on the utter ridiculousness of the statement that will surely be engraved into Kellyanne Conway’s headstone.

Not wanting to be left out of the fun of lying without remorse, online clothing retailer Betabrand joined Dove in its own ad campaign of alternative facts.

Splashed across the internet and on billboards in San Francisco, Betabrand boldly and shamelessly claims, “We’re now bigger than Gap and Levi’s combined.”

It’s a post-truth world out there, folks, and those who aren’t going with the flow are going against it. You’re never gonna get ahead telling the truth, so throw on a pair of business casual yoga pants and a disco hoodie from Betabrands and spread some alternative truth — who knows, one day you too, if you lie hard enough, could be emperor of the United States of Breitbart.