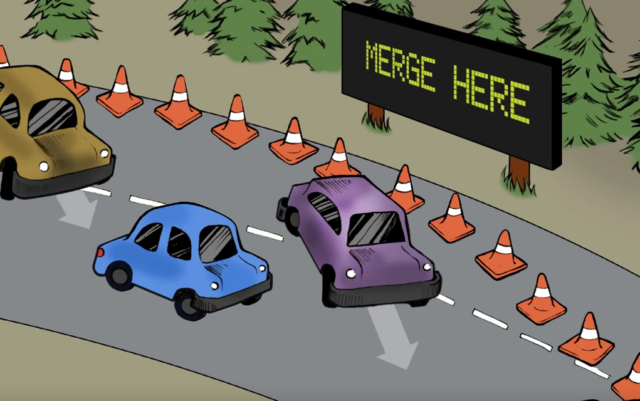 We’ve all been there. Sitting in a long line of stopped cars as other, seemingly jerk drivers wiz by in the right lane. Whether they are merging into stop-and-go highway traffic or coming up on a closed lane in a work zone, these drivers tend to piss you off, don’t they? “Don’t they know that lane ends soon?” you think to yourself. Or “That seems dangerous and just plain rude.” Or better yet, “I’m stuck in this ridiculous back-up and they should be too.”

Although we might be able to relate, we’re also here to tell you, you’re wrong. Roads are designed to be used and there are people who devote their life to studying traffic patterns and efficiency. CDOT sent out a press release entitled “Merge Late to Reduce Work Zone Delays,” earlier in the summer and we felt it pertinent to reiterate a few pointers.

Still don’t believe us? According to CDOT, studies show that “the late merge method can shorten queue lengths by as much as 35 percent when traffic is heavy.”

As CDOT Transportation Systems Management and Operations Director Ryan Rice said in the press release, “We appreciate that drivers are trying to be courteous by merging early, but this creates more delays and potentially hazardous traffic back-ups. Merge late during congested periods and everyone will save time and be safer.”

So here’s the deal. While CDOT may appreciate merging early when there isn’t traffic, they politely point out those drivers you find yourself at best shaking your head at and at worse cussing out and shaking your fist at, aren’t actually doing anything wrong. So take Obama’s advice: Stop whining. Suck it up, buttercup, because life’s not fair and it never will be.

We get it. People like shoes. But spending $300,000 on one pair is a little excessive. But I guess when the Smithsonian does it, it’s “preservation.”

Almost 80 years ago, Judy Garland took her famous walk down the yellow brick road wearing a pair of ruby red slippers. Apparently, time hasn’t been good to those slippers and they need some TLC to the tune of a few hundred thousand dollars, according to the Smithsonian’s Kickstarter campaign.

Now we’re not saying that those shoes aren’t an iconic piece of Americana film history… We just think maybe shop around for a better quote? Surely the local cobbler has some deals going on? Or maybe the Smithsonian’s staff can try some DIY fixes. We’re just spitballing here, but a bag of sequins at your local craft store is maybe $10?

Granted, the Smithsonian people probably know more than we do. Or maybe not. On their Kickstarter page they claim that they actually don’t know what they’ll do to fix the shoes. Along with scientists, the museum’s conservators will examine the materials and determine how to repair the shoes and the proper conditions on which to display them — that right now involves controlled humidity and temperature and something called “calibrated light exposure.”

The page also claims, after they go through the $300,000 facelift, the slippers’ appearance won’t change much…

Overall this seems like a great way to spend over a quarter of a million dollars.