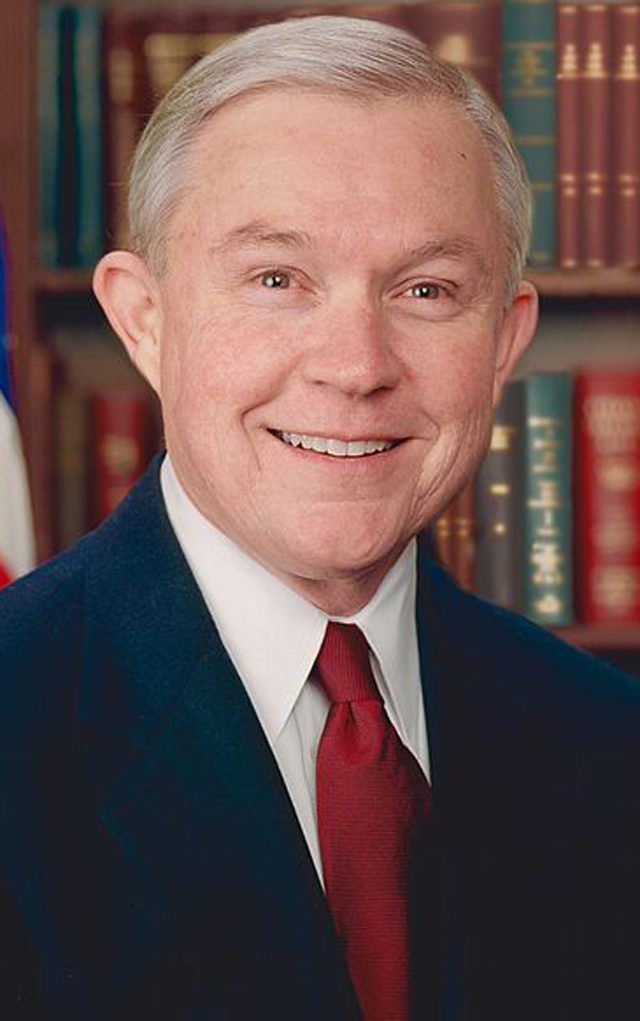 Well I guess you could say this is progress of a sort.

Here’s the quote in context from his written speech (italics added):

“I reject the idea that America will be a better place if marijuana is sold in every corner store. And I am astonished to hear people suggest that we can solve our heroin crisis by legalizing marijuana — so people can trade one life-wrecking dependency for another that’s only slightly less awful. Our nation needs to say clearly once again that using drugs will destroy your life.”

For a drug war dead-ender like Sessions, the inclusion of the phrase represents movement in his thinking about marijuana.

But wait, there may be less here than meets the eye. Or more.

According to reporter Chloe Sommers of The Weed Blog, while the phrase “only slightly less awful” was included in Sessions’ prepared remarks, he removed the line from his speech when he delivered it. It’s not clear why he removed it, she said.

There are at least two possibilities.

Possibility One: He gagged at the last second on admitting that pot is even “slightly less awful” than heroin.

Possibility Two: He has decided to back away from equating marijuana use with heroin use, a position that is both factually and politically unsustainable.

What makes possibility two plausible is something the attorney general said in response to a question after his formal remarks. The questioner asked if the Department of Justice (DOJ) intended to keep abiding by the terms of the Cole Memorandum, as it had done during the Obama administration.

“The Cole Memorandum set up some policies under President Obama’s Department of Justice about how [marijuana] cases should be selected in those states, and what would be appropriate for federal prosecution, much of which I think is valid,” Sessions said.

“I may have some different ideas myself in addition to that, but essentially we’re not able to go into a state and pick up the work that police and sheriffs have been doing for decades,” he added.

The Cole Memorandum, which was issued on Aug. 29, 2013 by then Deputy Attorney General James M. Cole, gave “Guidance Regarding Marijuana Enforcement” to all United States attorneys in the light of state ballot initiatives that legalized recreational pot.

It said the feds would focus its anti-marijuana enforcement efforts on eight priorities:

• Preventing the distribution of marijuana to minors;

• Preventing revenue from the sale of marijuana from going to criminal enterprises, gangs and cartels;

• Preventing the diversion of marijuana from states where it is legal under state law in some form to other states;

• Preventing state-authorized marijuana activity from being used as a cover or pretext for the trafficking of other illegal drugs or other illegal activity;

• Preventing violence and the use of firearms in the cultivation and distribution of marijuana;

• Preventing drugged driving and the exacerbation of other adverse public health consequences associated with marijuana use;

• Preventing marijuana possession or use on federal property.

The Cole Memorandum has defined the current state of relations between the feds and state governments that have legalized or decriminalized pot in one form or another. If Sessions isn’t rejecting it out of hand, that is real progress.

Marijuana Business Daily’s take on Sessions’ remarks about the Cole Memorandum was: “First, the Trump administration may issue a stricter version of the Cole Memo, but those guidelines will likely remain in place for the foreseeable future. Secondly, the DOJ almost certainly won’t be starting a war on the cannabis industry.”

Sessions’ past pronouncements on marijuana legalization contain a lot of alternative facts — no one has proposed that marijuana should be sold “in every corner store,” for instance, which more accurately characterizes alcohol and tobacco sales — but real facts are stubborn things, and Sessions, Trump and the Republican-reefer-madness caucus in Congress will ignore them at their political peril.