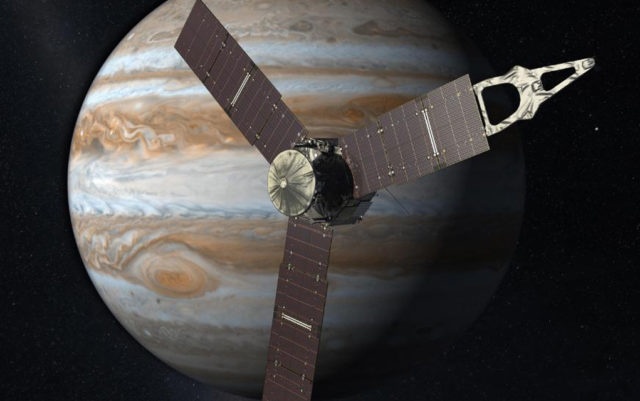 In Roman mythology, Jupiter is king of the gods and his wife Juno is the queen. Jupiter was known for his infidelity, so Juno was always keeping an eye on him. In one story, Jupiter fell in love with a priestess named Io and tried to conceal their affair with a veil of clouds. The goddess Juno peered through the clouds and revealed Jupiter’s true nature. With a name inspired by this myth, NASA’s Juno spacecraft arrived at Jupiter in early July and will spend the next 18 months peering through the clouds to discover its inner secrets.

“We’re going to fly past Jupiter up close, measure the gravity field, the magnetic field, as well as the microwaves coming from the deep interior,” says Fran Bagenal, professor in the Department of Astrophysical and Planetary Sciences at the University of Colorado and a team leader for the Juno mission.

Bagenal first came to Boulder in 1987 as a visiting scientist at NCAR’s High Altitude Observatory, and she joined the faculty at CU in 1989. She has been involved with Juno since the beginning. She now leads one of the three primary working groups that are responsible for conducting science experiments during the mission.

The Juno spacecraft was built right here in Colorado by Lockheed-Martin, and it was launched from Cape Canaveral in August 2011. Although it was strapped to the largest available Atlas-V rocket, the launch alone didn’t give it enough momentum to reach Jupiter. Instead, it flew out beyond the orbit of Mars and then whipped past Earth again in 2013 to get a gravitational boost that pushed it into the outer solar system. It made headlines last month on July 4, when it finally reached Jupiter and slowed itself down enough to be captured by the planet’s gravity, a maneuver known as orbit insertion.

Most missions to the outer solar system rely on nuclear power to operate at large distances from the sun. A radioisotope thermoelectric generator uses heat produced by the radioactive decay of plutonium-238 to create power. This is not the type of plutonium that is used for weapons, but it can only be manufactured in nuclear reactors.

When Juno was being designed, the United States was running out of plutonium-238, so the mission needed to find another power source. Despite the fact that sunlight is only 4 percent as intense at Jupiter as it is on Earth, improvements in the efficiency of solar panels allowed the mission to operate on just 200 watts of power from three arrays, each measuring 9 by 29 feet.

“There’s nothing like having to go to another planet to design equipment that is super energy efficient,” Bagenal says. “I believe that’s one of the big payoffs that comes with space exploration.”
Unlike previous missions to Jupiter, Juno will orbit over the north and south poles of the giant planet. This will allow it to pass very close to the cloud tops while avoiding radiation belts above the equator that would damage sensitive electronics on board. It made the first close pass when it arrived at Jupiter last month.

After making a couple of longer orbits, in October it will begin orbiting every two weeks, gathering information for several hours during each close pass and transmitting the data to Earth when it is further away.

Juno will map the gravitational field of Jupiter to probe its inner structure, it will use microwaves to determine the water content of the atmosphere and it will study Jupiter’s northern and southern lights to understand the planet’s magnetic field. These experiments are designed to answer key questions about the structure and formation of planets, not only in our own solar system but also around other stars.

“Jupiter played a major role in solar system formation, possibly also in bringing water to the Earth,” Bagenal explains. “If we knew how our solar system formed and the role of Jupiter in that process, we could begin to compare it to other solar systems.”

The spacecraft is designed to endure the radiation environment near Jupiter for up to 37 orbits, but even a handful of close passes are expected to solve some of the planet’s most important mysteries. Whenever the mission ends, Juno is scheduled to make a controlled descent and burn up in the atmosphere of Jupiter. The purpose of this fiery exit is to avoid any possibility of contaminating Jupiter’s icy moon Europa, which has a sub-surface ocean that scientists believe may harbor life.

Stay tuned as local scientists help unlock the secrets of the king of planets.

Travis Metcalfe, Ph.D., is a researcher and science communicator based in Boulder, Colorado.