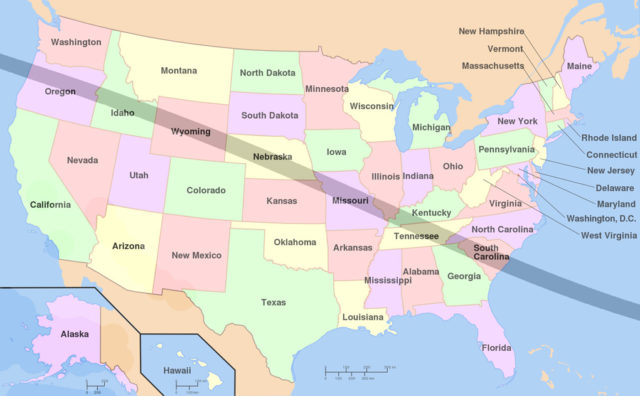 More than a century ago, Albert Einstein proposed a new theory of gravity, suggesting that concentrations of matter warp the underlying fabric of space, like a bowling ball sitting on a trampoline. If he was correct, light passing near the sun should be deflected slightly, shifting the apparent positions of background stars. During a total solar eclipse in 1919, British astronomer Arthur Eddington made the historic measurements that confirmed Einstein’s theory.

And next summer, anyone with a high-end digital camera can repeat the experiment as the shadow of the moon sweeps across the country on August 21, 2017.

Unlike a lunar eclipse, opportunities to see a total solar eclipse are relatively rare. Lunar eclipses occur up to several times a year, and anyone on the night side of the planet can watch the full moon get darker as it passes through the shadow of the Earth. Partial solar eclipses happen almost as frequently as lunar eclipses, but they can only be seen from specific places, often in the middle of the ocean. A total solar eclipse, when the moon passes directly in front of the sun and blocks it out entirely for a few minutes, can only be seen from within the 70-mile wide shadow cast by the moon. The last time this happened in the United States was 1979, and most of the country won’t see one again until 2045.

The path of the total solar eclipse next summer stretches from Oregon to South Carolina. Around 11:30 a.m. on August 21, the shadow of the moon will speed across Grand Teton National Park. Seven minutes later, it will pass over Casper, Wyoming and then sweep through Nebraska from northwest to southeast in less than 20 minutes. Anyone near the center line will see twilight around the entire horizon for just over two minutes. The hot gas that surrounds the sun will cast an eerie silver light punctuated by a ring of pink magnetic loops. Bright stars and planets will briefly become visible in the sky.

“It looks like the end of the world,” says Doug Duncan, director of the Fiske Planetarium in Boulder. “It starts to get cold, and animals start to freak out and do strange things. It’s almost like you’re in a dream.”

Duncan relocated to Boulder in 2002 from Chicago, where he had worked at the Adler Planetarium for 10 years. He has traveled all around the globe to see 10 total solar eclipses, and he now leads educational trips to bring large groups of people to these events. He started preparing for the 2017 eclipse several years ago, and he will host an event with more than 250 people at the Jackson Lake Lodge in Grand Teton National Park.

From Colorado, the nearest places to see the total eclipse are in Wyoming and Nebraska. About 93 percent of the sun will be blocked out from Boulder, but a three-hour drive north on I-25 to Glendo, Wyoming will put you right on the center line. If you prefer Nebraska, a four hour drive on I-76 and I-80 to North Platte will get you into the shadow, and another half hour north to Stapleton will make the darkness last 40 percent longer. Duncan suggests that there is no comparison between the partial eclipse that can be seen from Boulder and the total eclipse just a few hundred miles away.

It would be like hearing a live concert of your favorite band from the parking lot at Red Rocks, instead of going inside to see it for yourself.

“I wouldn’t be surprised if 100,000 people all decided to drive I-25 that morning, headed for Wyoming,” Duncan predicts. The eclipse is on a Monday, so he recommends that people head north over the weekend and enjoy a campsite or small-town hotel to avoid the rush. Although the total eclipse will only last for a few minutes, the entire event will play out over several hours. The sun will start to be covered by the moon earlier in the morning, and after the total eclipse it will gradually get brighter into the early afternoon. Do yourself a favor: bring water, sunscreen and a hat. Most importantly, you’ll need some special eclipse glasses.

“McGuckin has the best record of any hardware store in the country of providing eclipse glasses for people,” Duncan says. During a partial solar eclipse in 2012, they sold 10,000 pairs for $2 each.

Another total solar eclipse will come to the United States in 2024, but it will start in Texas and pass through several Midwest states before hitting New England. It will be nearly 30 years before the next one in our region, which will pass right through Colorado in 2045. If you’re feeling lucky, make your hotel reservations now in Colorado Springs. Otherwise, don’t miss this chance to confirm Einstein’s theory of gravity for yourself, or simply enjoy the surreal spectacle of a slowly vanishing sun.

Travis Metcalfe, Ph.D., is a researcher and science communicator based in Boulder, Colorado. His non-profit organization accepts contributions to support the Lab Notes collective at labnotes.whitedwarf.org