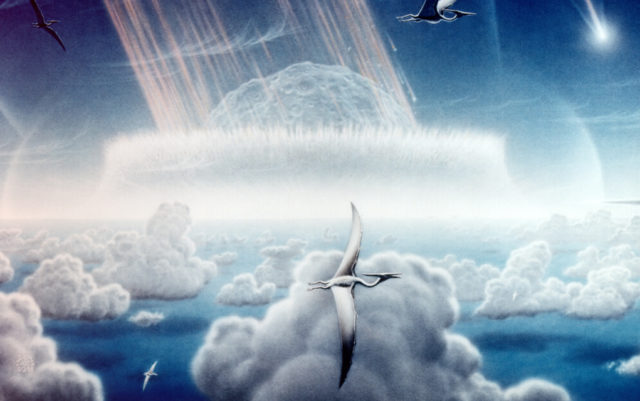 When a huge space-rock fell from the sky 66 million years ago, it quickly brought an end to the age of the dinosaurs. Rat-like mammals had been living side by side with the giant reptiles for millions of years. Somehow the rats survived the calamity, gradually filling the niches left by their extinct predecessors, and ultimately evolving to dominate the planet. Last month, researchers from the Denver Museum of Nature and Science (DMNS) filled in the details of this amazing story with a spectacular fossil discovery just outside of Colorado Springs.

Partially hidden beneath the Gulf of Mexico near the tip of the Yucatán Peninsula, a crater from the event that killed the dinosaurs was discovered in 1978. Spanning more than 90 miles across and 12 miles deep, the crater was formed when an asteroid at least 7 miles wide struck the Earth with 100 million times the energy of the most powerful nuclear bomb ever detonated. Within minutes, an ejected curtain of molten rock rained down on the planet and set the land on fire. A few hours later, a 300-foot tsunami extinguished the surrounding shorelines. Debris clouded the global atmosphere, blocking the sunlight for years afterwards, and three-quarters of all known species disappeared.

“While it was a really bad time for life on Earth, some things survived, including some of our earliest ancestors,” said Tyler Lyson, curator of vertebrate paleontology at DMNS and lead author of a paper published in Science magazine last month.

Lyson grew up in North Dakota near the Hell Creek geological formation, which is littered with fossils ranging from 65 to 67 million years old. While still in high school, he discovered a rare duck-billed dinosaur fossil on his uncle’s ranch with preserved skin and other soft tissues. He studied biology at Swarthmore College in Pennsylvania, and went on to receive a Ph.D. in paleontology from Yale University. After doing some postdoctoral research at the Smithsonian National Museum of Natural History in Washington D.C., Lyson came to Colorado in 2014 to be a curator at DMNS. Two years later, he made a stunning discovery.

Twenty miles east of Colorado Springs, Corral Bluffs Open Space has been a favorite site for fossil hunters since the 1930s. Like the Hell Creek formation where Lyson spent his early years, Corral Bluffs has layers of rock that span a million years before and after the global catastrophe that wiped out the dinosaurs. Lyson and his colleagues from DMNS had been searching unsuccessfully for mammal bones at the site for months. Before the asteroid impact, mammals were so small that their fossilized teeth and bones were extremely hard to find. Higher up the bluffs, in the layers deposited after the extinction event, they found nothing.

Searching through the archives back at the museum in Denver, Lyson discovered that one of the only mammal fossils ever to be found at Corral Bluffs had been encased in a strange-looking rock called a concretion. When he returned to the site in September 2016, he stopped sifting through the dirt for bone fragments and instead looked for these odd-shaped rocks. Almost immediately, a pale blob caught his eye.

“I picked it up, cracked it with my rock hammer, and broke it in two,” said Lyson at a news conference last month. “I could see the cross-section of a mammal skull staring back at me.”

By the end of the day, Lyson and his colleagues found three more mammal skulls encased in similar concretions, a bigger haul than most paleontologists encounter in their entire careers. Over the subsequent months, the scientists patiently scoured the bluffs not only for additional mammal bones, but also for fossilized plants and pollen in the immediate surroundings. This allowed them to piece together a picture of the slow recovery that took place during the several hundred thousand years after the asteroid impact.

To establish a solid timeline for the recovery, the scientists relied on a unique clock hidden inside the rocks of the bluff. The Earth currently enjoys a stable magnetic field that makes your compass point north, but this field has periodic flips, swapping north and south. Certain rocks that are rich in iron can record the orientation of the Earth’s magnetic field at the time they formed, allowing geologists to stitch together a timeline with the dates of all such reversals in history. At the bottom of Corral Bluffs, the team found iron-rich rocks that preserved a flip that happened 67 million years ago. Rocks at the top showed another flip from 65 million years in the past. Now the locations of their fossil discoveries up and down the bluff could be mapped onto dates in history.

The story that emerged from Corral Bluffs is fascinating. In the layer of rock laid down 100,000 years after the asteroid impact, fern spores were everywhere and the largest mammal was no bigger than a rat. After 200,000 years, palms dominated the landscape and some mammals had grown to the size of raccoons. By 300,000 years after the impact, planet and animal diversity was exploding. Walnuts and legumes appear in the fossil record, and some mammals reached the size of pigs weighing up to 50 pounds.

“We speculate that the introduction of these more caloric-dense food sources may have helped drive mammal body mass,” Lyson said.

The slice of history that is preserved at Corral Bluffs has provided the most detailed record yet of how mammals survived the dinosaur apocalypse and flourished as the environment slowly recovered. In addition to the article published in Science, Lyson and his team are featured in “Rise of the Mammals,” a recent Nova special on PBS that you can now stream online. Better yet, visit the Denver Museum of Nature and Science for a sneak preview of their latest discoveries.