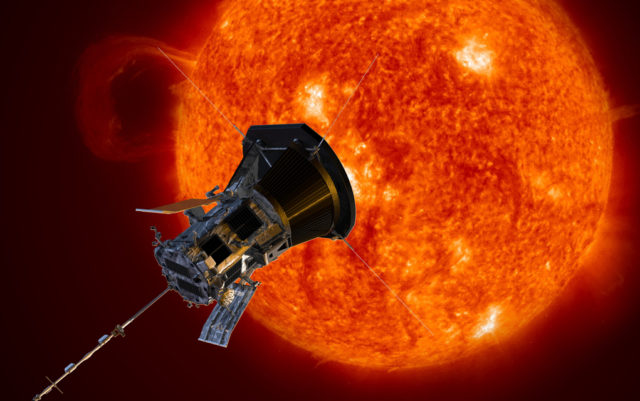 Just after Christmas 2019, a NASA spacecraft soared past Venus toward the inner solar system, and near the end of January 2020, it passed closer to the sun than any satellite in history. Along the way, it has been measuring the intense radiation, harmful charged particles and dynamic magnetic fields in the solar atmosphere, aiming to unlock the secrets of the matter and energy that flow out and occasionally burst toward the Earth. Scientists at the Laboratory for Atmospheric and Space Physics (LASP) in Boulder designed and built some electronics for the mission, which recently sent back exciting new discoveries about our local star.

The Parker Solar Probe was launched in August 2018, and has already had three close encounters with the sun to make unprecedented measurements of the solar wind, a stream of charged particles that flow out into the solar system at speeds ranging from 150 to 450 miles per second. Named after Eugene Parker, a physicist who developed the prevailing theory of the solar wind in the mid-1950s, the spacecraft will gradually get closer to the sun over its six-year mission.

During its first few orbits, the satellite came within 15 million miles of the sun’s surface, already closer than any previous mission and well inside the orbit of Mercury, the planet closest to the sun. The next two orbits will bring it within 12 million miles, and over the next several years it will step closer to 9, 7, 5, and eventually less than 4 million miles, about five times the sun’s own diameter.

To survive the extreme temperatures that could damage its sensitive instruments, the spacecraft is protected by a carbon-composite shield thicker than the door on an industrial refrigerator. At closest approach, the temperature of the shield is expected to reach nearly 2500 degrees F, and the spacecraft will be moving through the particles and dust in the solar wind at up to 120 miles per second, hundreds of times faster than a bullet.

“You’re sort of flying through this hail-storm at incredible speeds, and the spacecraft has to be designed to survive it,” says David Malaspina, a research scientist at LASP who helped build a signal-processing unit for one of the mission’s instruments. “[Parker] Solar Probe is now the fastest human-made object.”

Malaspina earned a degree in physics from Purdue University in Indiana before coming to Boulder in 2005 to begin his doctoral work building instruments to measure electric fields in space. Toward the end of his studies in 2009, he contributed to a proposal to develop one of the instruments for the Parker Solar Probe. The proposal was selected for funding by NASA, so after finishing his Ph.D in 2010 he was hired on as a postdoctoral researcher at LASP to help build the FIELDS instrument.

“FIELDS measures electric and magnetic fields near the spacecraft,” Malaspina explains. “The piece that we built is sort of like the brains of the instrument; it makes decisions about what data are interesting and what data are not.”

In early December 2019, the mission announced its first results with several scientific papers published in the high-profile journal Nature. The papers analyzed observations from the first two orbits of the spacecraft, which measured previously unknown conditions near the sun and came up with some surprising results. The solar wind near the Earth has been monitored for decades, and is known to be extremely turbulent, like waves on the shoreline of a raging sea. Theoretically, the scientists expected the wind to get more and more turbulent as they approached the sun, but that’s not exactly how it turned out.

“It’s like going toward a hurricane and expecting more turbulent seas the closer you get,” says Malaspina. “What we found was these calm patches of solar wind in between the very turbulent structures.”

These alternating patches of turbulence and calm in the solar wind are not yet completely understood, but they offer a preview of the surprises that may be in store for the Parker Solar Probe as it gets even closer to the sun over the coming years. The mission aims to improve scientist’s understanding of the basic physical processes that drive the solar wind, not just the steady background flow but also the violent eruptions that sometimes crash into the protective magnetic field of the Earth, disrupting communications and endangering satellites and astronauts. If scientists can improve their ability to predict this “space weather,” the impacts can be managed and potentially avoided.

“Being able to predict when these things happen, and what direction they will be pointed, is something that will be important for future travel through the solar system,” says Malaspina. “If these types of events were to happen while astronauts are outside the Earth’s atmosphere, they could be badly irradiated.”

As NASA prepares to send crewed missions that return to the moon and eventually travel to Mars, the ability to monitor and ultimately predict the powerful explosions coming from the sun will be essential to keeping astronauts safe. In the meantime, the Parker Solar Probe will provide a broad array of new measurements from an ever-closer perspective to help make such predictions possible.