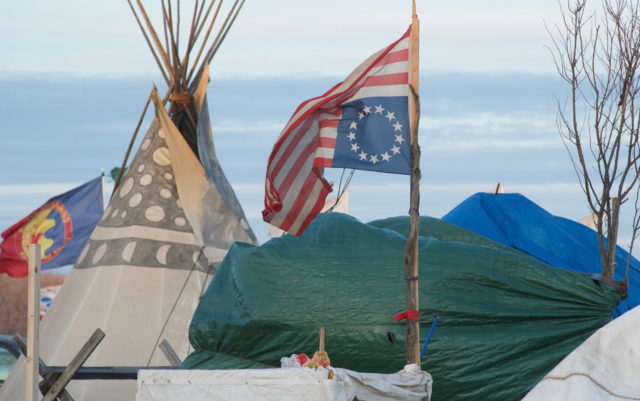 Sometime in the fall of 1979 I got a phone call from a friend of my older brother. He wanted to know if I was interested in making some money. Having no money, no job and nothing else to do, I replied, “Maybe… doing what?”

Thirty-eight years ago I was a 21-year-old long-haired peacenik with no particular career aspirations living in a $75-a-month, three-room shack with a band and anybody else who needed a place to flop. The offer to “chase Indians” came on a day with mustard-only sandwiches on the menu so I agreed to meet the guy at his office in downtown Oklahoma City. Turned out he worked for an oil company. And that phone call… nearly four decades later, is still an unfolding story.

Not surprisingly, I would come to learn that “chasing Indians” was a racist term that, like so many other racist terms, was thought to be somehow funny by those who coined it. In the context of the oil biz, it referred to tracking down the heirs of deceased Native American mineral rights owners from very poorly kept records at the Bureau of Indian Affairs. The BIA is an agency within the Department of Interior that, among other things, is charged with managing hundreds of thousands of Individual Indian Money Accounts (IIMs) in trust for Native peoples.

IIMs are a long, ugly story in their own right. For purposes here, just think of them as a black stain on American history that harkens back to efforts of forcibly assimilating Indians into white culture while stealing their lands and money. Make that a black stain on the present day as well. It’s still happening.

But back to “chasing Indians.”

Theoretically, the job was to locate certain Native Americans, but finding them was not considered as important as showing that you’d made some effort to look for them. If by chance you actually managed to find such a descendent, the goal was to get them to sign an oil and gas lease if they weren’t “restricted.”

Being labeled “restricted” is a long, ugly story in its own right. For purposes here, just think of it as our government’s effort to protect Indians from themselves and unscrupulous white speculators, or at least that’s the story. Supposedly, out of the goodness of its heart, the federal government declared hundreds of thousands of Native Americans and their future heirs to be “restricted,” meaning they can’t execute legal documents for themselves, at least not deeds and leases on their inherited Indian lands or mineral rights and things like that.

As you can imagine, there are few angrier people in this world than a Native American attorney who isn’t allowed to sign her own oil and gas lease while the dumbass white guy with a second-grade education taking up space on the bench in front of the local gas station can put his name anywhere he wants it. Long story short, the government is in charge of signing leases for “restricted” Indians and more importantly, managing their lease bonus payments, rental payments and royalty monies.

What could go wrong?

But back to the topic at hand.

For the most part, “chasing Indians” was simply considered a legal formality so that the oil company could claim it had tried to find the missing heirs before they “forced pooled” their mineral interest under a well.

“Force pooling” is a long, ugly story in its own right. For purposes here, think of it as a way of taking the oil from someone you never found to ask their permission or even from someone who refused to sign your lease after you did find them. That’s right, the law lets the industry go ahead and take the oil so long as it keeps the money that would have gone to the missing or uncooperative mineral owners in an account in case they ever show up to claim it. Unfortunately, if you are Native American, that account is an IIM at the Department of Interior’s BIA.

Well, I didn’t know all that back then, so I said I’d do it. I decided to split the proceeds of my new temp job with my best friend and frequent house flopper Brad. A small price to pay for good company, as I was told I’d be spending a few weeks driving around in Western Oklahoma talking to strangers. I am an introvert after all.

The pay was good, twice as much as I’d ever made in my life. At least it was before I split it. We were given a stack of files with snippets of information about the people we were to look for. But as we were leaving, we were also handed $100 cash and told to buy as many bottles of cheap whiskey as it would purchase (Canadian Mist was about $4 a fifth at the time). The idea was to offer the whiskey in exchange for information as to people’s whereabouts. We were told it was “the only way they’ll tell you anything.”

We may have been young and naïve, but we knew how messed up that was.

It was hard to believe even in 1979 that the oil and gas industry was still acting like the guys in black hats trading guns and whiskey in an old Jimmy Stewart movie. We thought the whole “chasing Indians” thing sounded kind of crazy, but the whiskey crap was way over the line. I can’t remember if we eventually used any of that hundred bucks for whiskey or not, but if we did, we were the ones who drank it.

The first file in our stack instructed us to find the heirs of a Native woman who died in 1921. After half a century, there could easily have been a hundred or more of them but all we had to go on was a handwritten note in the file with the name Forrest Flyingout and a Weatherford, Oklahoma address. We arrived at a small brick house out in the country, definitely Indian housing. The front door was open and as we walked onto the porch a man’s voice barked from inside asking what we wanted.

I told him we were looking for Mr. Flyingout to sign an oil lease. He told us to come in. There were four guys I’d guess to be in their early 30s sitting around the living room. One of the men said he might know Forrest and then to my amazement, he asked if we had any pot or whiskey. I started laughing and pretty soon all of us were laughing. We exchanged asshole-oil-industry epithets for a few minutes. I told them about the hundred bucks and the instructions that came with it. They weren’t surprised at all. The whole whiskey thing was a running inside joke for them and apparently everyone in their community. They weren’t sure how it got started, but they took great delight in making the racist idiots from the oil companies give them booze to get directions to somebody’s house. A couple of cigarettes later, the guy in the rocking chair by the window told me he thought Forrest was at a little blue house about two miles further up the road. We said our goodbyes and headed that way.

When we got to the blue house, the woman who answered the door told us that Forrest was in town shooting pool. When we got to the bar we asked three Native guys around the table if one of them was Forrest. We were told he had just left to go over to a friend’s house. They directed us back to the original house where we started. I could hear the laughing inside as we walked towards the front door for the second time, albeit two hours later. Once inside Forrest introduced himself. He was the guy in the rocking chair who had sent us on our goose chase. We may not have been the usual oil company jerks but we were still fair game. Pretty funny really. You can have a lot of fun with strangers and a few phone calls if so inclined.

And that’s when my BIA-oil-money education began, although I didn’t know it at the time.

All I wanted to do was get Forrest, who was “unrestricted,” to sign a lease so he could get his bonus payment and hopefully ongoing royalty checks if the well wasn’t a dry hole. This was back when wells went up and down instead of horizontal so they missed pay-dirt pretty regularly. I couldn’t understand why he wasn’t more interested in signing. It was easy enough to see from our surroundings the money could be put to good use.

Then he told me that no matter what he signed or was supposed to get, he’d never see a dime. He explained how the money always disappeared into the BIA and never got dispersed.

It was a story I would hear over and over again from Native people during the next few weeks. I thought I was really onto something and couldn’t wait to report what was happening in Indian Country when I got back to the city. But nobody at the oil company seemed concerned by the stories of missing money. It wasn’t their fault the BIA kept crappy records.

I didn’t cut my hair but that career thing eventually worked itself out. In August of 1996, I was a journalist going through boxes of files at the Native American Rights Fund (NARF) in Boulder. I was working on a story about missing money owed to the tribes — tens, if not hundreds, of billions of dollars worth of missing money. Thanks to that phone call nearly two decades earlier, I knew how it had gotten “lost” and so did the attorneys at NARF.

It was December 2010 and I was working on another update to what, for me, has been a 38-year-long story and for Native Americans more than a century longer than that. President Obama finally signed off on the Claims Resolution Act, which was a $3.4 billion with a “b” settlement to Native Americans for all their lost money from the government’s mishandling of the IIM accounts. Granted, it was only a fraction of the Indian’s money that had been misappropriated, the polite word for stolen. But it was a lot better than nothing, and it was important that the government had been made to admit it had been screwing over Native Americans for a really long time including modern times. It was old news to Indians but shocking to a lot of people who like to pretend “manifest destiny” was something that came and went in the 1800s as opposed to something currently driving policy. Ever heard of Standing Rock? That’s what manifest destiny looks like today.

And so the long, ugly story continues.

It all just goes to show that you never know which things that come your way will end up being big chapters in your life. And if you want to create change, you better be in for the long haul.