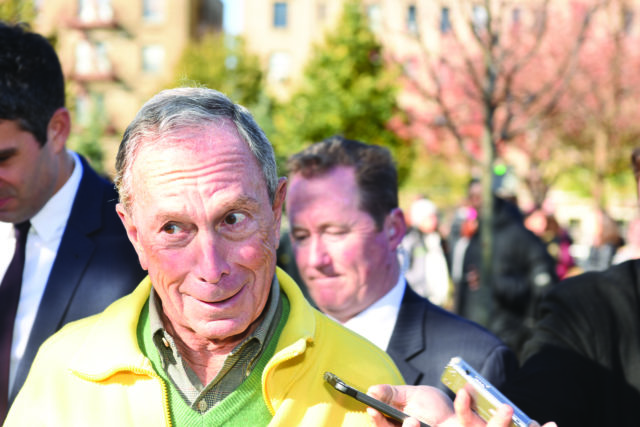 File under “dumb” and “dumber.” This item via Tom Angell at Marijuana Moment:

On Feb. 1, Michael Bloomberg told a reporter for KUSA TV in Denver that putting people in jail for marijuana is “really dumb.”

That’s really interesting, because last year the multi-billionaire who is currently trying to buy the Democrats’ presidential nomination opined that legalizing marijuana is “perhaps the stupidest thing anybody has ever done.”

That comment prompted the KUSA reporter to ask the former New York mayor: “Are the people of Colorado stupid for legalizing it?”

Which caused Michael the B to choke out a, uh, nuanced answer:

“Colorado has a right to do what they want to do,” he said generously. “I would advise going slowly to any other state because it’s not clear, doctors aren’t sure whether or not it’s doing damage. But if a state wants to do it, and Colorado and Washington were the first two that did it, that’s up to the state. But what I really object to is putting people in jail for marijuana. That’s really dumb.”

My, my, how Brother Bloomberg’s views on putting people in jail for marijuana possession have “evolved” since he was mayor of New York. Back then, Hizzoner was a cheerleader for “stop-and-frisk” policing, under which cops stopped people for looking at them cock-eyed and made them empty their pockets. The result was tens of thousands of arrests for pot possession, with a spectacularly disproportionate number of the arrestees being black or Hispanic.

But supporting the war on marijuana is tough when you’re running for the presidential nomination of a political party where 76% of the members favor legalizing marijuana (according to a Gallup poll taken last October).

So Mayor Mike’s views have “evolved,” or mutated, as the case may be. In December 2019, he told the Wall Street Journal that he now “believes in decriminalization and doesn’t believe the federal government should interfere with states that have already legalized.”

That’s his story, and he’s stickin’ to it.

Meanwhile Bernie Sanders does not think legalizing marijuana is really dumb. In fact he thinks keeping marijuana illegal is dumb — so dumb that he recently promised to legalize weed in all 50 states on the first day of a Sanders presidency.

Could he really do that?

Nope, but he could come reasonably close.

The Controlled Substances Act — the law which currently defines marijuana as a Schedule I Controlled Substance (the same as heroin) — also sets up a process by which marijuana or any other drug can be rescheduled or removed from the aegis of the act entirely without another act of Congress.

Presumably that authority is what Senator Sanders was thinking of when he promised first-day legalization.

Here’s how it works:

This rescheduling process could not be done on day one of a Sanders presidency. For one thing, both the attorney general and the HHS secretary would have to be confirmed by Congress, a process that can drag on for weeks after the inauguration. And a “scientific and medical evaluation,” even a perfunctory one, would take additional time.

Earlier Sanders promised to legalize marijuana within the first 100 days of taking office.

That’s a more realistic time-line. And one that by government standards still passes for warp speed.