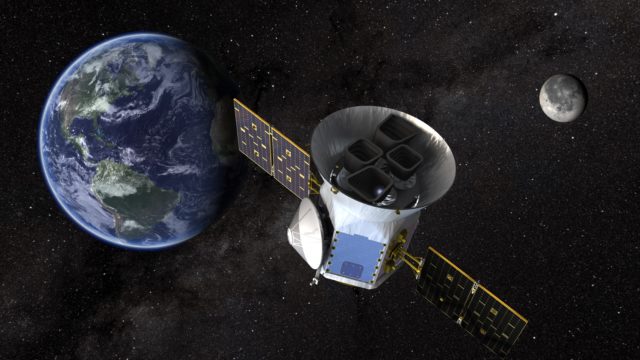 The past year has been fantastic for commercial spaceflight, with Elon Musk’s SpaceX successfully launching 18 Falcon-9 rockets in 2017. It now seems almost routine to watch the first stage of the Falcon-9 gently land itself back on the launch pad after sending its cargo into orbit. The company expects to reuse even more rockets in 2018, leveling out to a steady slate of 30 to 40 launches per year. Later this spring, one of those rockets will carry NASA’s next mission to find planets around other stars: the Transiting Exoplanet Survey Satellite, or TESS.

The method that TESS will use to search for planets was pioneered by scientists at NCAR nearly 20 years ago. The concept is simple: If you stare for long enough at a large number of stars, you might catch one of them blink as a planet passes directly in front of it. Not all of the planetary systems will be aligned so fortuitously, but a few of them will. From basic geometry, the amount of light that goes missing during these mini-eclipses (technically called transits) reveals the size of the planet as a fraction of the size of the star. Keep watching and you’ll see it come around again, giving the orbital period of the planet, which is related by Newton’s laws to its separation from the star.

NASA’s previous planet-hunting mission, the Kepler space telescope, was built in Boulder at Ball Aerospace. From 2009 to 2013, it surveyed nearly 200,000 stars in a small patch of the summer sky about as big as your fist at arms length. Kepler measured the brightness of each target star every half-hour for four years. What it discovered was amazing: Planets are so common in our galaxy that almost every star in the sky has at least one. Most of the planets discovered by Kepler were quite small, and rocky worlds like the Earth are among the most common planets around.

With Kepler showing that planets are sprinkled everywhere, the logical next step is to scan the entire sky and find them around the nearest stars. This is the job of the TESS mission, which is currently expected to launch in late-March from Cape Canaveral, Florida. It will orbit the Earth on an elongated path that takes it from twice the altitude of most weather satellites out to nearly the distance of the moon. Over a two-year mission, TESS will use four large cameras to scan the sky in 26 partially overlapping strips. For most of the sky, TESS will linger on each strip for about a month, but for two special regions it will collect up to a full year of brightness measurements.

“In a few years, I hope we’ll have a sample of at least a thousand new planets,” says Zach Berta-Thompson, an astronomy professor at University of Colorado Boulder and collaborator on the TESS mission. Berta-Thompson came to Boulder in 2016, after finishing a Ph.D. at Harvard University and working for a few years at MIT, where the TESS mission was developed. His technical contribution to the project was to devise a strategy for cleaning the TESS images of artifacts caused by cosmic rays, but his scientific interest is in characterizing the atmospheres of nearby small planets. “The closer a planet is, the more precisely we can measure its properties,” he explains.

If a distant observer watched the Earth pass in front of the Sun, it would block less than one-10,000th of the light for about six hours once a year. An even smaller fraction of the light would pass through the Earth’s atmosphere along the way, imprinting the signature of water and other molecules that might be associated with life. Half a year later, the reflection of sunlight off the Earth would provide additional information, possibly revealing the presence of green plants. TESS won’t make these measurements directly, but it will find the nearest planetary systems around the brightest stars, where such measurements are feasible.

“By effectively measuring the color of sunset on these planets, we can learn something about the composition of their atmospheres,” says Berta-Thompson. He notes that the two special regions where TESS will look for a full year coincide with the parts of the sky that will always be visible from the James Webb space telescope (JWST), NASA’s successor to Hubble. The JWST will launch in 2019 with instruments that can characterize the atmospheres of nearby planets, so it should be ready to make the measurements as soon as TESS finds the best places to look.

If everything proceeds as expected, the 10th Falcon-9 launch of 2018 will begin the next phase of NASA’s quest to understand whether the Earth is exceptional compared to planets around other stars. There’s no word yet on whether SpaceX intends to launch TESS on a reused rocket, but either way it promises to be spectacular, ushering in a new age of exploration.

Travis Metcalfe is a researcher and science communicator based in Boulder, Colorado. With support from several technology companies, he runs a nonprofit adopt-a-star program to fund astronomy research.