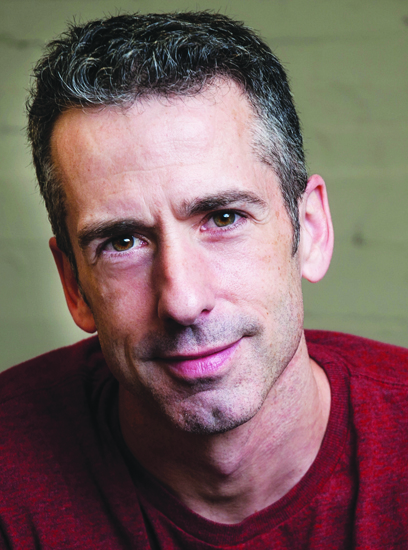 My laptop died last week. My laptop couldn’t die when I was in the office, with capable tech support people close by. Oh, no. My laptop lost its will to live when I was thousands of miles away, in a country where I don’t speak the language. So, I wasn’t able to access my Savage Love email – which is a problem, since no questions means no column. So, I put out an SOS on Instagram, asking my followers there to send me their quick-and-dirty questions. I wrote my responses on my phone… which I dropped at one point, shattering the screen, BECAUSE OF COURSE I DID. So, my laptop is dead, my phone is broken, and my thumbs are bloodied. But I got this week’s column done with the help of my followers on Instagram. Thanks, gang. —Dan

Q: What do you do when you’ve told someone who is supposed to be a friend to stop making sexual comments but they keep saying sexually charged things?

A: You realize this person isn’t a friend and hang out with your actual friends instead.

Q: British fag here. (I mean, cis gay guy in his mid-30s in the U.K.) I am living in Germany. My question: You had a British caller living in the USA on the Savage Lovecast a few episodes back and he said his accent alone unbuckled belts there. Is it true? German guys do not find my accent sexy. But if I moved to the States would I be drowning in cock?

A: Cock is a solid (ideally), not a liquid (although with a powerful enough blender, anything is possible), so you would be choking on cock over here, not drowning in it. And, yes, a British accent is a plus in the USA—because unlike Europeans, Americans don’t have to put up with mobs of English tourists hopping on cheap flights, terrorizing our city centers with their drunken bachelor/bachelorette parties and puking on our doorsteps.

Q: How do I tell my friends and family that I’m poly now?

A: Use your words.

Q: Best way to tell your hubby his armpits have started to smell? (He’s never needed deodorant before!)

A: Use your words!

Q: How do I tell my boyfriend nicely that he needs to brush his teeth more often? He’s very sensitive to this kind of feedback, but I don’t want him to have stinky breath in a work meeting!

A: USE YOUR WORDS! When my breath stinks or I need to take a shower or use some deodorant, I’m grateful when my partner says something to me—because I’m a grownup. If your partner can’t handle this kind of feedback, you need to ask yourself why you’re wasting your time on someone who isn’t a grownup.

Q: I’m a 40-year-old woman. I was sexting with a guy (29) who started sending me nude/sex pics (including face shots) of another woman he had been with, without her consent. He thought it was sexy, but I was repulsed. Teachable moment or trash him?

A: If you ghost him, he’s likely to assume the photos he shared (and the massive consent violation they represent) weren’t the issue or even an issue. He needs to know. So, teach, then trash.

Q: Can you please explain the difference between transgender and transsexual? A lot of arguments happen online about the semantics of these foundational definitions, so some clarity would be appreciated. Thank you!

A: Definitions and redefinitions come at us so fast these days—to say nothing of redefining old definitions as hate speech—that there’s no point in attempting to answer this question. Because by the time this column is published, odds are good that whatever I write today will be out of date and/or a cancelable offense. But so far as I know right now… all transsexual people are transgender but not all transgender people ar transsexual. I hope that clears things up.

Q: Do you think we will keep seeing significant changes in sexual-orientation-self-labeling in the future?

A: In the future everyone will have their own niche sexual orientation for 15 minutes—and their own neo-pronoun and their own pride flag. The oceans will rise and the planet will bake and we will be arguing about whether “cake” can be a pronoun as the meteor hurtles toward earth.

Q: How much time do bottoms really douche?