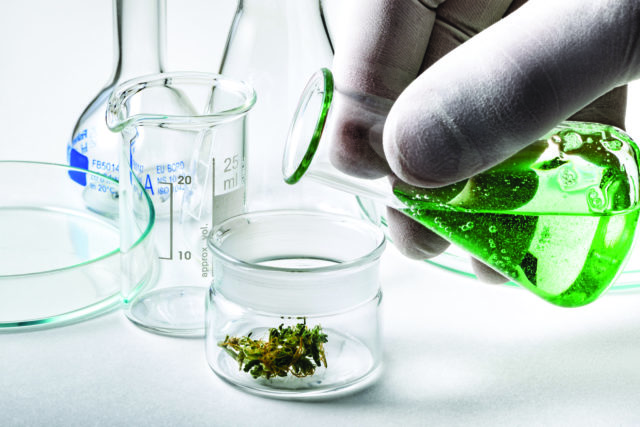 I’m no scientist, but it seems like studying cannabis is kind of like studying the depths of the ocean: the deeper you go the more mind-blowing stuff you discover.

In 2019, a team of Italian researchers found a new compound in cannabis that could be 30 times as potent as THC.

Sounds pretty intense, right? Sure, but as always, there’s a lot we still don’t know.

According to the research published in the journal Scientific Reports, the new compound, dubbed tetrahydrocannabiphorol (THCP), reacts with the CB1 receptor, same as good ol’ THC. The difference comes in the side chain of atoms each compound has that allows it to connect with cannabinoid receptors.

These alkyl side chains (if you want more chemistry, you’re gonna have to look it up yourself, sorry) must have at least three carbon rings in order to plug into the CB1 receptor. THC typically has five carbon rings. But science has long posited that eight carbon rings would provide the best fit for the receptor and elicit the strongest biological response.

THCP has — wait for it — seven carbon rings.

This theory was supported by giving THCP to lab mice, who acted just like they would if they were given THC: their movements slowed, temperatures decreased and their reactions to painful stimuli diminished. The researchers found it would take about twice as much THC to induce the same effects in mice.

Problem is, they still don’t know how THCP will react in humans. Like many of the compounds found in cannabis, THCP appears to be present only in small amounts, though researchers were using low-THC cannabis for the study. Still, that doesn’t mean it’s impossible to develop larger amounts of THCP in the lab, we just don’t know yet. And just because THCP binds to the CB1 receptor more reliably than THC, that doesn’t necessarily mean that it will produce the same high as THC. Nor does it mean it will produce the same sought-after medicinal effects (appetite stimulation, and pain and nausea relief).

The research team found another compound they dubbed cannabidiphorol, CBDP, which looks like, you guessed it, CBD but with a seven-carbon alkyl ring. But, just like CBD, CBDP doesn’t bind strongly to either CB1 or CB2. That doesn’t mean it doesn’t have functionality. In their findings, the researchers said they will remain “focused on testing [CBDP’s] anti-inflammatory, anti-oxidant and anti-epileptic activity, which are typical of CBD.”

At this point, nearly 150 phytocannabinoids have been found in the cannabis plant, but the majority still haven’t been isolated or characterized. We’re going to be seeing more research diving into these compounds, like THCP.

“In our opinion,” the team wrote in their findings, “this compound should be included in the list of the main phytocannabinoids to be determined for a correct evaluation of the pharmacological effect of the cannabis extracts administered to patients. In fact, we believe that the discovery of an extremely potent THC-like phytocannabinoid may shed light on several pharmacological effects not ascribable solely to [THC].”

With nearly 200 million people around the world using cannabis, I have to agree that it’s well past time to take a deeper dive into what makes this plant tick.