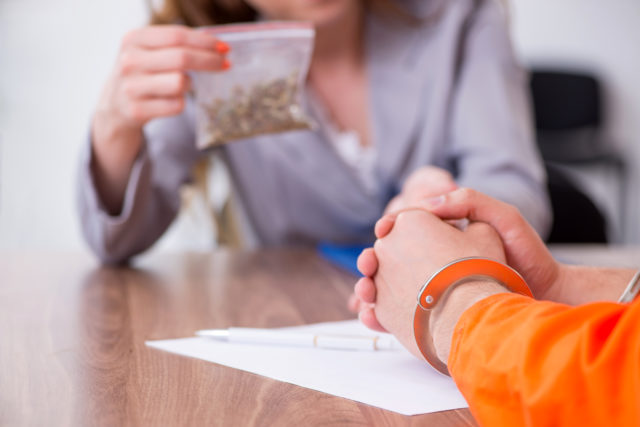 April is apparently “second chance month” (because redemption, like Black history and gay pride, only deserve one single month of recognition in America). And in honor of that, on April 27, President Biden gave 78 individuals serving nonviolent drug offenses their very own second chances. Sort of.

Neither Joe Biden nor Kamala Harris have ever been serious advocates for marijuana reform. Biden himself helped author the 1994 crime bill that increased sentencing penalties for cannabis possession and other drug-related crimes, and Harris, for her part, oversaw over 1,900 cannabis convictions as a prosecutor in San Francisco.

Nevertheless, in 2020, when the two were on the campaign trail, drumming up support and stirring excitement, they made big promises. Biden’s campaign page explicitly stated in one of its 17 templates that, “I’m voting to decriminalize marijuana use.” Many thought that could come with the mass expungement of cannabis felony convictions for individuals across the U.S. who’ve struggled with felonies for nonviolent cannabis crimes on their records. Both lawmakers and activists advocated for mass pardons across the board; and with both a Democrat-controlled Congress and Democrat sitting president, things seemed hopeful that pipe dream could actually become a reality.

It never happened. But 16 (going on 17) months into his presidency, on April 27, President Biden finally exercised his executive power to grant clemency to 78 individuals convicted of nonviolent drug crimes, just three of whom received full pardons. And only nine of whom were serving time for cannabis crimes.

“America is a nation of laws and second chances, redemption, and rehabilitation,” Biden said in a statement. “Elected officials on both sides of the aisle, faith leaders, civil rights advocates, and law enforcement leaders agree that our criminal justice system can and should reflect these core values that enable safer and stronger communities.”

It’s a wonderful sentiment. Some said it represents a shift in the executive branch’s stance on cannabis prohibition. Personally, it seems like a reluctant shuffle in the right direction—and a very small one, at that.

The Last Prisoner Project estimates that there are currently 40,000 people in prison serving sentences for cannabis crimes. Thousands more exist among us, struggling to find employment, unable to get federal loans, unable to vote, unable to live a normal American life with past cannabis felonies following them around.

So what do three pardons and 75 commuted sentences mean in the scope of this issue? If only nine of them were serving time for cannabis sentences, how does this address the problem of cannabis incarceration and conviction at all?

“My immediate reaction was, ‘[Biden] didn’t pardon all of them?’” says Lenny Frieling, a Colorado defense attorney with over 45 years of drug defense under his belt. “The question that comes to mind is: How do you pick? How do you decide which ones [to grant clemency to]?”

It’s a good question. The statement from President Biden specified that the three pardons were granted to individuals who had “demonstrated a commitment to rehabilitation.” The 75 whose sentences were commuted were designated as individuals serving “long” sentences for non-violent drug crimes. But exactly how these specific 78 cases were selected remains untold.

“Screw that,” says Frieling. “If it’s a possession case in my mind it’s trivially easy: 100% of those should be dismissed. There is no reason anyone over 21, without extenuating circumstances, should be serving a cannabis sentence.”

Because while three individuals received full pardons (fully removing their sentence and expunging their background), the other 75 weren’t quite so fortunate. A pardon is just one form of clemency, but other forms include reprieves, which temporarily “stay” a sentence; or, as in this case, it can mean a “commutation,” which merely reduces a felony sentence.

Meaning those 75 people serving “long” sentences for non-violent drug offenses are just serving shorter sentences now than they were before. They still aren’t free, and their records remain un-expunged.

“While granting clemency to nine individuals for federal marijuana offenses is the right thing to do, it is woefully inadequate,” Erik Altieri, the executive director for National Organization for the Reform of Marijuana Laws (NORML), said in a press release. “It is well past the time for President Biden to make good on his campaign promise to expunge the records of all federal marijuana offenders and prove that justice isn’t just a buzzword he uses to gain votes during election season.”

Contact the author with comments or questions at wbrendza@boulderwekly.com