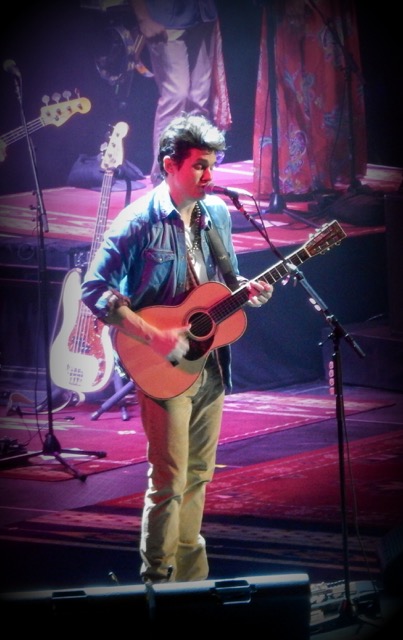 You remember him, John Mayer from the 2000s, the understated pop hunk with the hollowed eyes who somehow managed to woo us even though we swore we wouldn’t succumb to his poppy seductions. We hoped that behind his sly smile was something deeper, a vulnerability maybe, something that would justify being able to sing along to his litany of songs inspired by his at times excessively boyish sexuality.

Easily, he made it through his teenage years, flirting with conventional success and enduring the pangs of a succession of young loves won and lost on the public stage of celebrity. Eventually though, he would succumb to the alluring thrills of stardom and the mania produced by a majestic rise to the top of the music world’s A-list.

The fall of our pop hero came in 2010 with two unsavory interviews in Rolling Stone and Playboy that were so unpalatable they stirred a wave of ire. In retreat, Mayer took a hiatus from society for bucolic Montana and got to searching his soul.

Now, out of the woods and nearing 40, Mayer speaks about his time in the abyss of self-reflection with soul-baring authenticity, readily offering admissions about the likes of his on-again-off-again relationship with pop goddess Katy Perry, his adventures in therapy and his abandonment of booze. Instead, he says, he is “actually very thoughtfully entering cannabis life.”

His new album The Search for Everything is an ambitiously authentic tribute to the trip that brought him to rock bottom, what it’s been like spinning in the muck and about the immutable call to atonement. But now that he’s climbed his way back to the top he sounds like a happy guy, better for the turbulent waters he’s endured.

So what was it that brought Mayer across the threshold and who was it that held the lonely bachelor’s hand along the way? It turns out it was the guys he hung out with at his side gig, his glorified summer job playing lead guitar for Dead & Company, a 2015 regeneration of the Grateful Dead in a mashup of original members and more modern additions. “The feeling of inclusion that I have with this band — they saved my life,” he recently told The New York Times.

In the article, the statements about pot and the Dead are offered causally as asides (literally parenthetically) with an understandable eagerness to get on to what the pop star is up to now that he’s back (music videos with pandas).

But the declaration that a band “saved his life” is important, as pivotal as it is profound. The Grateful Dead didn’t keep him from his biological end, but from abandoning his hero’s quest.

In finding home at center stage of Dead & Company, Mayer encountered wise and practiced guides to accompany along the path of artistic rebirth — to rescue the soul from imprisonment. With variations this pattern is found everywhere along the history of the Grateful Dead: It is the trip beyond the mind, that collection of fragmentary concepts we call the normal world, that leads to liberation and re-entry.

The Grateful Dead, the progenitor of psychedelic rock, did not come by the genre accidentally. Both by induction and effect their music is a sonic exploration in psychedelic journeys, sometimes drug induced, always a genuine attempt to make manifest the soul through music.

The moral of the story is not that Mayer did drugs, found God and started smoking weed, but rather that he had a psychedelic inspired experience from which he emerged a very human and triumphant hero.

The Search for Everything is Mayer’s telling of that journey, separate from the Grateful Dead but still of it. It’s rooted in ordinary stories of a boy growing up, longing for love and acceptance. It’s a simple embrace of the messiness of life found through a journey into the unknown.

As Mayer steps out for The Search for Everything world tour and for his upcoming 20 show run with Dead & Company this summer (including two shows at Folsom Field) his personal reemergence is quickly becoming part of a broader one. Like a Grateful Dead jam rippling through the crowd or like relaxing social attitudes to cannabis sweeping across the globe, Mayer has come to both own and earn his spot as the modern front man of both movements.