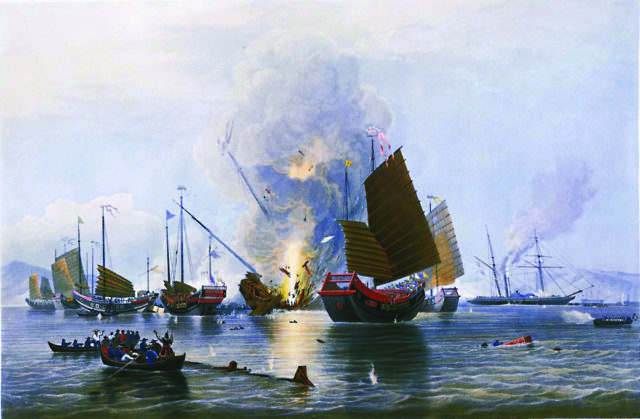 File this under: “What goes around comes around on the great One Belt, One Road of life.”

The story added that China called Trump’s assertion that Chinese President Xi Jinping had failed to follow through on his promises to crack down on the Chinese fentanyl flow, “blatant slander.”

In the same story, Reuters claims, Liu Yuejin, vice commissioner of the China National Narcotics Control Commission, told a news conference that while China and the U.S. counter-narcotics agencies have maintained a good cooperative relationship, “cooperation on investigating and prosecuting fentanyl-related substances is extremely limited.”

Since 2012, the U.S. has reported to China only six “clues” (leads) on fentanyl-related smuggling cases to China, with only three of these cases successfully cracked, according to China’s state TV.

Liu may have found it hard to make it through the Monday, Sept. 2 presser with a straight face. That’s because Wednesday, Sept. 4 was the 180th anniversary of the Battle of Kowloon, a skirmish between British and Chinese warships that took place in 1839 wherein the first shots were fired in what would come to be known as the “Opium Wars.”

Most Americans know little or nothing about the Opium Wars, but in modern China, they are a big deal. Like a defining-moment big deal.

The causes of the Opium Wars stretch back to the 18th century, when the British East India Company discovered there was fabulous wealth to be had from selling opium to the Chinese.

Make that by smuggling opium into China; the Chinese government (the Qing Dynasty at the time) made repeated attempts to stop the trade, issuing decrees and edicts in 1729, 1799, 1814 and 1831, which the East India Company circumvented or ignored.

Over the years, the company propped up a network of opium producers in what is modern-day Bangladesh, and by 1838, it was selling about 1,400 tons of opium a year in China.

According to the 2004 book, The Opium Wars by William Hanes and Frank Sanello, the British opium trade resulted in 10 to 12 million Chinese addicts.

The East India Company may have pioneered the business practices and the morals later adopted by Joaquin ‘El Chapo’ Guzman, but it had the support of the British government. That’s because the opium trade was so lucrative that it reversed an unfavorable balance of trade Britain had with China. Silver had been flowing out of Britain to pay for Chinese imports like silk, porcelain and tea. Opium sales turned the silver flow around.

In 1839, the Chinese government launched a crack-down, confiscating all supplies of opium in Canton, the only Chinese port open to European traders, and seizing any opium found on foreign ships in the area.

While the first shots were fired on Sept. 4, 1839, the Brits didn’t get around to passing a formal declaration of war until 1840. The Royal Navy then spent the next two years bombarding Chinese ports and thrashing the technologically outclassed Chinese military. The 1842 treaty that ended the war provided, among other things, that four additional Chinese ports would be open to European traders, that Hong Kong island would be ceded to Britain — and that the East India Company would be compensated for the opium the Chinese had seized and burned in 1839.

The Second Opium War was a lot like the first, only this time it was the French, and to a minor extent, the Americans backed by the Brits. It ended with 10 more ports being opened to European traders — and with the opium trade being legalized by China under duress.

So here we are, 180 years later. The opioid trade is alive and well, only this time the Chinese are the leading producers and smugglers, and Westerners are the leading consumers.

According to The National Institute of Drug Abuse, in 2017, 1.7 million people in the U.S. “suffered from substance use disorders related to opioids,” and 130 people a day died from opioid overdoses.

From the Opium Wars to the fentanyl question — what goes around comes around. With a vengeance.