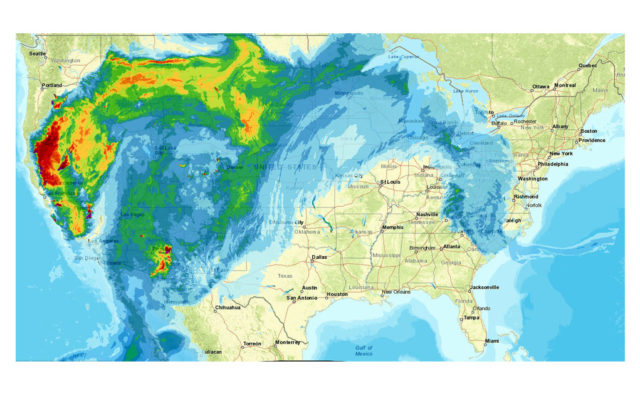 It’s already been a challenging wildfire season in Colorado, with crews currently battling four major fires around the state. Driven by an exceptionally hot and dry August, the air quality along the Front Range has suffered, not only from the smoke of our local fires but also from California and other Western states. Scientists at the National Oceanic and Atmospheric Administration (NOAA) in Boulder have recently developed a forecast model to track the wildfire smoke as it spreads across the country and disrupts outdoor activities.

Climate change does not start wildfires, but it creates the conditions that make these extreme events more frequent and severe. Across the globe, other countries have also experienced the impacts. Australia had unprecedented bushfires during its hot season six months ago, and Russia is currently fighting widespread fires in the boreal forests of Siberia. Ironically, the burning trees release more carbon into the atmosphere and thaw the methane-rich permafrost in the Arctic, adding to the heat-trapping pollution that is already making conditions worse.

The dryness that facilitates wildfires comes about from a combination of declining rainfall and hotter temperatures. After a strong start to the winter snow season, Colorado saw a sudden drop in precipitation during the spring. To make matters worse, the monsoon pattern that normally moistens and cools the Southwest never materialized, drying out the region for the third year in a row. These dry conditions were compounded by record heat through most of the West, bringing temperatures to nearly 130 degrees in Death Valley, California. About half of the reduced flow of the Colorado River over the past century is attributed to evaporation from higher temperatures rather than reduced precipitation.

“In Colorado, half the state is in severe or extreme drought conditions right now,” says Jennifer Balch, director of the Earth Lab at the University of Colorado Boulder. “Across the West, human-caused warming has effectively made fuels much drier and doubled the amount of Western forests that have burned since 1984.”

Smoke is the most visible impact of the new wildfire reality, but it affects more than just the view from your favorite mountain peak. The haze blocks sunlight during the day, and traps heat during the evening, so there are direct effects on the predicted temperatures downstream from the fires. There are also chemical reactions of the smoke in the atmosphere that have potential health impacts for firefighters near the blaze as well as kids at the school playground. When wildfires were smaller and less frequent, weather forecasters used simple rules of thumb to predict the local impacts of smoke on temperature and air quality. But with such events becoming increasingly common, a more sophisticated approach is needed.

The National Weather Service at NOAA can now include smoke in its forecasts, as an experimental add-on to its High Resolution Rapid Refresh (HRRR) weather model. The HRRR model provides the data for most of the local weather forecasts across the nation, and it produces 48-hour projections of local conditions for every square mile of the country. To be as accurate as possible, the predictions are updated every four hours. The addition of smoke to the HRRR model changes regional temperatures, which has an influence on larger-scale wind patterns, and the smoke interacts with wind and rain as it moves through the atmosphere.

“The first step in the process is for satellites to detect the presence of a new wildfire,” says Curtis Alexander, a scientist at NOAA who leads the development of the HRRR. “The model has the wherewithal of understanding how the winds are going to transport the smoke downstream and disperse it over a three-dimensional depiction of the atmosphere.”

The haze in Boulder was already thick in mid-August from the Colorado wildfires, especially the Williams Fork fire near Granby. At the same time, lightning from thunderstorms triggered hundreds of new fires in Northern California, bolstering the total of a million acres that had burned across the state. Within a week, the surge in haze from California made a noticeable contribution to Boulder’s air quality problems, and ground-level smoke from all of the Western wildfires stretched as far as Washington, D.C.

“Smoke is interesting, and the HRRR gives you much more detail than air quality websites, like how concentrated is it going to be, and where did it come from?” says Jessica Gilman, an atmospheric chemist at NOAA who is studying changes in Boulder pollution levels during the coronavirus pandemic.

Before you head out for your next run or bike ride, you can check the local smoke forecast at hwp-viz.gsd.esrl.noaa.gov/smoke. There are options to see vertically integrated smoke through the whole atmosphere, or near surface smoke that produces the noticeable haze and potential health impacts. With climate change making Western states hotter and dryer over time, smoke forecasts from NOAA are poised to become the new normal during wildfire season.