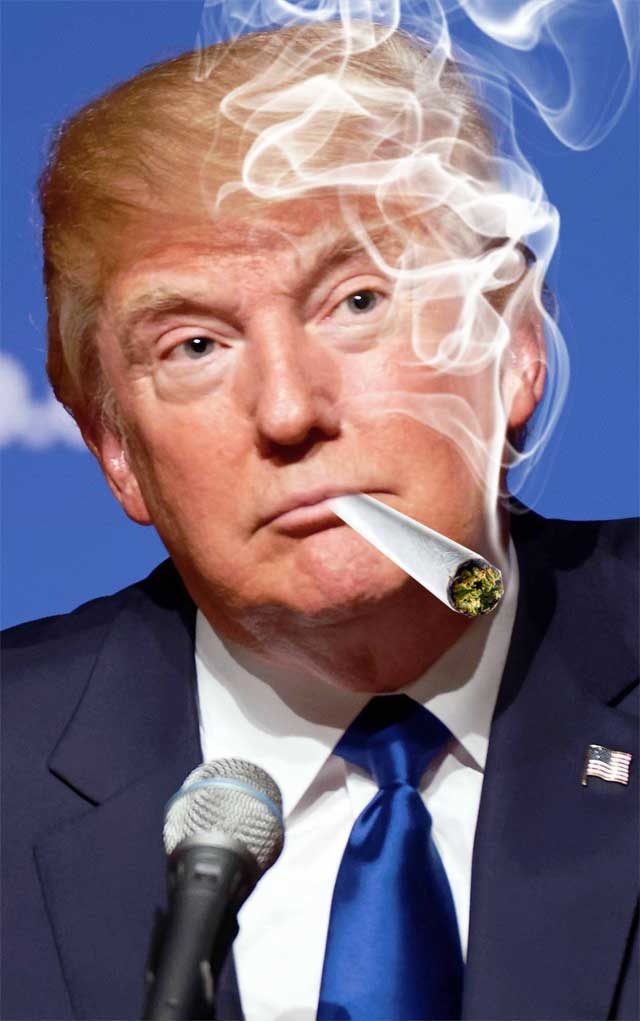 A few weeks ago I wrote a piece in this space (“Yikes! Sessions!,” Nov. 24, 2016) that listed some of the reasons why I thought Trump wouldn’t re-start the war on marijuana — despite the fact that he named Alabama Senator Jeff Sessions, a reefer-madness-obsessed crank, as his choice for Attorney General.

I argued that 1) Trump has said he thinks marijuana legalization should be left to the states, 2) Polling shows pot prohibition is an idea that’s long past its expiration date, 3) Attacking legalized marijuana will get Trump no supporters he doesn’t already have and will alienate a lot of potential new supporters he needs — like Millennials who overwhelmingly support legalization, 4) If Trump is serious about reaching out to Black America, a good way to start would be to quit arresting black people for marijuana, and 5) Trump hired Sessions because of his stands on immigration, not pot.

That’s the rosy scenario. Now for the un-rosy one.

Real Time host Bill Maher laid out the scenario from the dark side in a recent interview. The interviewer asked him if he thought there could be federal raids in the legal marijuana states under a Trump Administration.

Maher is dismissive of the idea that Trump is committed to states’ rights for pot legalization. He thinks that most people who support states’ rights, Trump included, do so for self-serving reasons and would have no problem supporting states’ rights in principle and a new federal war on pot in practice. He also thinks Trump’s “stated political position on anything should be afforded the same merit as a toddler’s answer to ‘what do you want to be when you grow up?’”

He points out that the eight states that have legalized marijuana all voted for Clinton — and that Trump is a guy who holds grudges.

He maintians that while polling shows 60 percent of America may want legal marijuana, that’s no guarantee that it will get its way — “56 percent of the country wanted a president not named Trump.”

He also thinks that if it turns out Trump can’t stop illegal immigration, build a wall and bring back manufacturing jobs, “he’s going to need a new, easily-hated scapegoat to vilify to distract his low-information alt-right base,” and that “potheads” could easily fill the bill.

OK, Maher is the kind of guy who is frequently wrong but never in doubt.

But here are three other un-rosy scenario elements to go with Maher’s that trouble me more.

Trump has made a number of cabinet appointments besides Sessions who are anti-legalization — for example, Representative Tom Price of Georgia as Secretary of Health and Human Services. A cabinet with a strong anti-pot bias could influence Trump’s thinking on legalization, especially if he starts out as ambivalent on the issue, which he appears to be. And without strong direction from the president, guys like Sessions and Price could go rogue.

Trump is a teetotaler who lost a brother to alcohol and drug abuse. Some of the highest profile advocates of the drug war and opponents of marijuana legalization are rich and powerful men who lost children or siblings to addiction, like casino magnate Sheldon Adelson. Trump fits the profile.

Trump has promised to stop the flow of drugs into the U.S., a point he repeatedly raised in connection with building the wall on the southern border. From there it is a short policy step to cranking up the drug war again.

I still don’t think Trump will crack down on marijuana — both for the reasons stated above and because doing so would hand the Democrats an issue they could use to beat up both Trump and Republican congressional candidates in from now until 2018. But I could be whistling in the graveyard here.

The real indicator of Trump’s thinking on marijuana legalization and the drug war will be who he appoints as director of the DEA and Drug Czar (aka Director of the Office of National Drug Control Policy).

If either of those worthies is as doctrinaire as Sessions on marijuana, then there is real cause for concern.