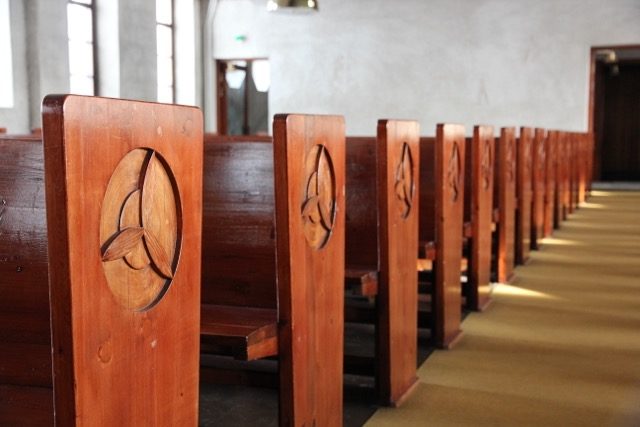 Weddings have a way of bringing me to a point of excruciatingly thorough reflection — thinking about the choices I’ve made and what they add up to, the ways I am a part of a family and how I’ll never quite fit in. They make me wonder about how it is that one generation yields to the next, forging on in the spirit of its progenitors amid an entirely new set of circumstances.

From my place in the third pew, I can hear Uncle Larry and Aunt Ellen bickering about the last time they were in Catholic church. Larry says 1965, but Ellen knows he’s wrong. It’s just that she can’t prove it. Larry hushes her. I turn around to see the rest of my very extended and very Jewish family filling the next 10 rows. They sit in uncharacteristic quiet as a lone sopranist sings about Jesus and resurrection and love. We all feel more than a little out of place.

For the next hour the church is filled with prayers and amens and hymns of Ave Maria. At the priest’s direction we stand up then sit down, over and over again, my eldest relatives increasingly shaky on their feet. In their formal spring sandals you can see their toes shrivelled with age but also unnaturally contorted — twisting inward, bone bent and gnarled. Eighty years ago their feet were bound by poverty, stuffed into shoes three sizes too small, leaving them a lasting reminder of the walk they took to get through the Great Depression.

It’s been more than a hundred years since our family left the persecution of Eastern Europe for the tolerance and opportunity promised on American shores. My great grandparents walked off a boat, through Ellis Island and straight onto a factory floor. They worked hard to support their quickly growing family, their Brooklyn house swelling with a seemingly endless stream of newly arrived immigrants and newborns.

As the family grew it became an exemplar of the American diaspora. From New York, Haases spread around the country — to California, Colorado, Florida, Oklahoma — each following a separate path to the comforts of upper-middle class life. They became doctors and lawyers and business-owners and did their parents proud.

As if to claim the victories of their immigrant ancestors, our parents told us that we could grow up to be anything we wanted. Taking them seriously we became artists, writers, scientists and entrepreneurs, thinking we were just following our bliss and not realizing the weight of the freedom we carried forward.

It’s this position in life that I sit thinking about after the wedding, sipping on some wine, awkwardly hovering near the appetizers. Had I taken them too seriously? Is living as a defiantely single woman, as a tattooed artist-turned-writer who is thoroughly embracing drug culture taking it too far?

Mid-thought someone taps on my shoulder and I turn around to see Larry and Ellen. “Do you think it’s dangerous to fly with edibles?” Larry asks abruptly, a rebellious smile spreading across his face.

“Depends…” I say warily, not realizing my extended family knew the depth of my relationship with weed. He grabs my arm in excitement and the two of them regale me with stories about how expensive their pain medications are, how they’re becoming ineffective. “Ellen wants to try pot,” Larry says. “But it’s too hard to get in Florida. We thought you might know what to do.”

The conversation must have carried because soon my quiet corner near the food is the center of attention. My cousins come to talk about how bad weed is where they live in the French countryside, saying, “It looks like lawn clippings.” (“I guess that’s where we got the nickname ‘grass,’” I reply) Others talk about CBDs and about replacing sleeping pills with hash oil, giggling like kids sneaking liquor from their parents’ cabinet. From across the room my newlywed cousin winks and points at his pocket — he brought some along.

Later that night he casually offers me a drag of his joint. In the aftermath we talk about what it’s been like to become the reformers of obstinate traditions, how cool it’s been to watch our parents embrace a changing world and the gratification of living long enough to get what our family lived through — to understand how it shaped them, and us. Eventually he goes back inside to find his new wife and I wander off to find a stoop to sit on.

Looking up at the night sky, the stars have a way of connecting my story to the bigger one and I start to imagine marijuana like a Jewish immigrant family living inside a tiny house in Brooklyn during the Great Depression. Having freed itself from oppressive chains of persecution, it sits in waiting, accumulating resources and growing in allies until it no longer fit its circumstance and has no choice but to charge forward toward an evolving liberation, once again.

I look away from the sky and down at my feet. At size 10-and-a-half, they’re large for an American woman, but in the context of my family they are a source of pride — evidence of the progress we’ve made over the years. I laugh at how long it took to see them that way, busy as I was trying to fit in.