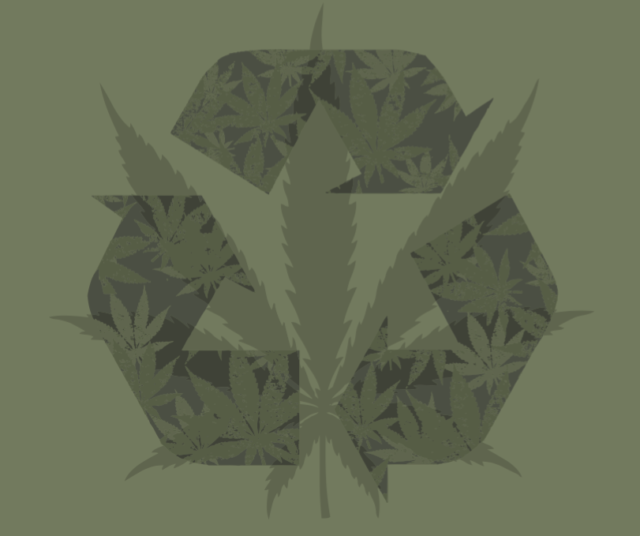 Ask people in the cannabis industry what their top priorities for marijuana sustainability are and you’re going to hear a lot of talk about waste. From the biomass waste that comes out of cannabis grows to the plastic child-proof containers that products are required to be packaged in, waste is abundant on both the producer and consumer ends of the market.

When the Marijuana Enforcement Division (MED) released a survey to cannabis businesses this year about sustainability, waste was again a prominent theme. But it’s something that can be readily addressed, according to Kaitlin Urso, small business consultant for the Colorado Department of Public Health and Environment (CDPHE).

“We kind of felt like it was the low hanging fruit,” Urso says. “Waste was a really easy, tangible problem that rose to the top as a priority for the industry.”

Like composting marijuana biomass. Currently, Colorado’s growers are legally required to dilute their organic waste with an equal amount of other garbage materials, like coffee grounds, sand, glass, bleach, oil, sawdust, shredded paper and plastics in order make it “unrecognizable.”

“The idea is is by mixing it with 50% non-marijuana waste, it’s then rendered ‘unusable and unrecognizable,’” she says.

Just in 2019, Colorado’s cannabis industry generated 3,650 tons of marijuana biomass waste, according to the CDPHE: that’s stalks, trimmings, roots and unusable leaves and nuggets. Not only does the 50% rule literally require growers to double the amount of waste coming out of the state’s cannabis grows, but it also makes all 7,300 tons of it non-compostable. The landfill is the only viable destination for it.

Now there’s another option. Thanks to the MED’s new exemptions, cannabis producers can now compost their biomass.

“It’s going to save producers processing fees and staff time without having to manage all this waste and grind it up and make sure that it’s in a 50-50 ratio,” Urso says.

It will potentially halve the amount of waste growers are required to dispose. They’ll also have the organic plant-matter left over to reuse as fertilizer or sell to another agriculturalist.

Another sustainability option for the cannabis industry involves a process known as anaerobic digestion.

“It’s basically where you just put composting waste inside of a box,” Urso explains. “Then, not only do you recover the nutrient value, but you can also recover those waste gases and use them as commodities.”

Anaerobic digestors create new resource streams for cultivators in the form of methane and CO2 released by the composting process. Those gasses are captured, stored in containers and can then be either reused on-site or sold to a third party.

Other new exemptions to the 50% rule include pyrolyzing the waste into biochar, which, when added to soil, allows plants to consume and convert more CO2, stimulating growth; and biomass gasification, which converts biomass into hydrogen or other gas products without combustion. All of these alternate routes for biomass represent sustainable disposal options and generate resources instead of unrecognizable landfill content.

The exemptions address the issue of waste on the consumer end of the cannabis industry as well. Due to the psychoactive nature of THC products, they are required to leave dispensaries in a child proof plastic containers, which, Urso says, are so small they aren’t easily recovered at recycling facilities.

“So, even though consumers might be putting them in their recycling bins, they may not actually end up getting recycled,” she says.

Earlier in 2020, the state legalized “take-back programs,” that allow dispensaries to accept returned cannabis containers for recycling. However, Urso explains, the law required that the collection bins be situated back within the retail space.

“They were where consumers didn’t have access to them, essentially,” Urso says. “So how would they know that they could recycle their packaging if they didn’t even see the place to return it?”

The MED’s new exemptions have changed that. Now those collection bins can be placed in plain sight, right in the waiting room where they can be seen and used.

“This was kind of a win-win-win for everybody,” Urso says. “[These changes] are going to be good for the community, they’re good for the environment and for these businesses. It’s just positive all around.”