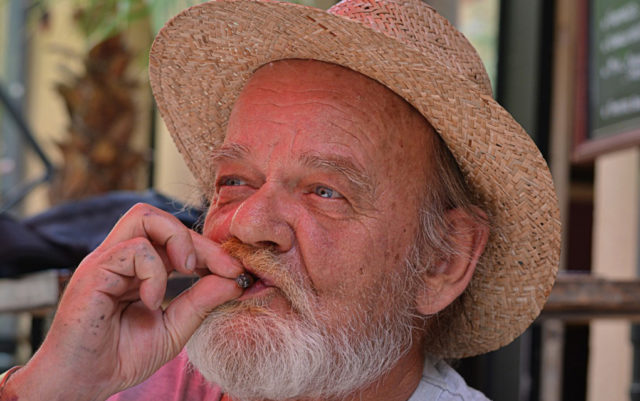 Getting old is exhausting, amirite? After destroying the planet and electing a 70-year-old predator who wholeheartedly believes that people are impressed by fake tanner, Baby Boomers are ready to chill out. They’re exiting the workforce, cashing in on the decades of equity they’ve amassed from their homes and moving to Florida so they can blow all of your inheritance money on Disney cruises and expensive tech gadgets that confuse them. As retirees, they can finally focus on their favorite hobbies like golf, calling you twice a week to ask why you haven’t given them any grandchildren yet, and now apparently, getting stoned.

According to a study by researchers at NYU School of Medicine and the Center for Drug Use and HIV/HCV Research (CDUHR), cannabis use is becoming more prevalent among older people: Nine percent of adults aged 50-64 said they’d used marijuana in the past year, which is double the number in the same age group in 2006. Nearly 55 percent said they’d tried it at least once in their lives. Three percent of adults 65 and older said they were current cannabis users and 22 percent said they’d tried it at least once. Baby Boomers are generally defined as people born between 1946 and 1964.

First, let me add that I do hold a lot of respect for older people and it would be incredibly naive to think that I, at 27, have somehow surpassed those who have seen and experienced much more history and time on this planet than I have. Boomers should be proud their legacy includes the Civil Rights Movement and Woodstock, which I can respect because fighting for equality and eating hallucinogenic drugs at music festivals are some of my highest values.

Although cannabis users are more likely to be young adults, Baby Boomers were the first generation to experiment with more recreational drugs than their parents. Their formative years happened during the ’60s and ’70s, when America was so high on weed and all that post-war prosperity that we just started sending people to the moon. Then came the ’80s, when they sold-out and bought-in. They got jobs and food processors and traded in smoking joints for taking coke bumps off bathroom mirrors. But now they’re going back to the green.

Since we live in a time where attitudes around weed are progressing, stigma is declining and access to the plant improves, Americans of all ages seem to be giving cannabis a try, for either recreational or medicinal purposes. Boomers with prior cannabis experience see this and are now reliving their glory days by increasingly using it.

In the study, researchers analyzed responses from 17,608 adults aged 50 and older from the 2015-2016 National Survey on Drug Use and Health. Participants were asked about marijuana use, including when they first used it and whether they used it in the past year. Most seniors who currently use cannabis first used it as teens when it initially surged in popularity during the 1960s and 1970s. This doesn’t mean they’ve been smoking for all these years, but most current users are by no means new to it. In addition, some adults who used marijuana in the past year (15 percent of users aged 50-64 and 22.9 percent of those 65 and older) reported that a doctor had recommended it to them, reflecting the substantial use of marijuana for medical purposes.

However, Boomers with prior experience shouldn’t just swing by the dispensary to start toking up like they did when they were younger. The potency is much higher in today’s strains, so a smaller amount will have a much bigger effect. Also, the ability to metabolize the drug changes with age.

The generational grass is always greener, so even though they fuelled the war on drugs and of course, in a final fuck-you attempt to dissolve the world on their way out, elected Donald Trump as the last Boomer president, at least some of them are chill. So the next time an old person launches into the theory that Millennials are lazy and we can’t afford houses because we spend all of our money on avocado toast, just correct them: “Actually, it’s cause we spend all our money on weed,” and pass them a blunt.