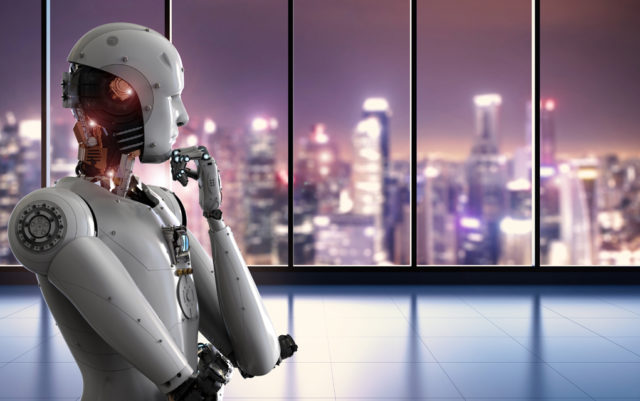 As the marijuana industry scales up across the globe, technology is rising to meet the occasion.

That’s right, friends: Robots are going to be harvesting your weed… the pot bots are coming.

There are lots of estimates floating around about just how big the cannabis industry will get over the next few years, but an article by The Motley Fool simplifies the numbers, suggesting that “the weed industry could practically double up the soda industry in about a decade, and may give the alcohol industry a run for its money, depending on whether consumers trade off alcohol consumption in favor of cannabis use.”

This is where automation comes into play in the cannabis industry, as it has in other sectors of the agricultural industry. While traditional farmers can pretty easily use big equipment like self-driving tractors and robotic harvesters, the delicate, often greenhouse-confined nature of marijuana crops present a unique challenge for tech companies to overcome — which, of course, they will.

“It’s been done by hand because the product you want is very specific,” Jon Gowa, CEO of Bloom, told business tech website ZDNet last September. “A traditional machine would chop it up. At the end of the day cultivators are selling this for quite a lot of money, so human harvesting has made sense.”

But maybe not for much longer.

Bloom’s harvester trims clusters of flowers using machine vision and path planning algorithms. Different cameras measure depth and identify parts of the plant, differentiating between flowers, branches and leaves. Bloom taught the system how to do this by incorporating thousands of images of marijuana plants.

Here’s how Bloom CEO Gowa explained it to Weedmaps in February of this year:

“Essentially, you’re loading conveyor belts with the branches which enter a cell where the robot, or robot arm, is contained, along with cameras that image the branches. The computer then analyzes the data and guides the robot to a specific location; on the next plant it gives a whole different set of actions because it’s looking at a different plant and the sensors are making new decisions.”

As of earlier this year, Bloom’s weed-harvesting robot was running at about 95 percent accuracy.

Of course trimming isn’t the only job machines can help with. Imagine-based machines can be taught to find impurities like mold in plants, or weed out (pun intended) a male plant in a crop. With a federally legalized marijuana industry, Canada is a big player in AI innovation for cannabis grows, like William Bond Ai in Ontario.

According to some recent reporting from NJ.com, William Bond Ai uses traditional agricultural robots from FarmBot (an open source platform) but programs the devices to understand the specifics of cannabis.

What all this means for traditional labor is up for interpretation. Trimming weed has long been a fairly lucrative, if not tedious, job that provided good money for those willing to put in the hours. Longtime trimmers told Weedmaps earlier this year that they felt like AI in the cannabis industry runs against the counterculture that created the industry in the first place.

“This industry started with people who were against capitalism, people who wanted to come out to the rugged, rough wilderness and make money their own way without being told what to do,” one trimmer and grower said. “The idea of robot trimmers is totally destructive; the whole nature of the industry was people coming together to celebrate the abundance of harvest. It was rich and beautiful. It was an industry of sharing.”

Still, others believe technology is what will ultimately liberate us all to live happier, more self-directed lives. The World Economic Forum estimates that AI will create as many jobs as it displaces, simply changing the type of work humans do.

Whether we are headed for a new age of high-quality jobs or an era of greater inequality, one thing is for certain: AI is changing the game, and we can expect to see more of it in the pot industry as the years go by.