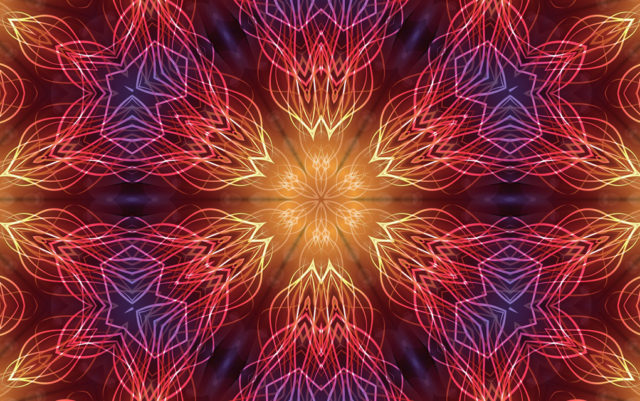 Short, bald and with a beer in hand, Dr. Andrew Gallimore stood in front of a packed house about to deliver his buzzworthy talk: “Talking with Aliens: DMT and the search for Extra Dimensional Intelligence.” But he didn’t open with the easy hook, he did’t tell a story about the elvish critters he and countless others have met in the DMT state. No. He began with something much more mundane, something much more… Boulder. He started with a green apple and a pen.

On the Thursday before the event, Gallimore was standing in line at Safeway where he’d gone to buy some razors (re: the meticulously bald head) when he noticed the gentleman in front of him purchasing what was to Gallimore an odd pair of items.

Of course, everyone in the room listening to Gallimore recount this story knew these to be the bare essential tools needed to make a smoking pipe in a pinch. But the good doctor described the scene with such an infantile-like curiosity and attention to detail that the room listened in awe as he revealed the inner workings of his highly attuned scientific mind.

He wondered aloud about how the shopper came to buy these two items — specifically as if on a list, or were they the bizarre result of a more haphazard shopping trip? He told of the moment the gentleman pushed the pen into the fruity flesh with a mix of horror and sheer delight.

“My aim is to give you all the information I have, to give you full disclosure,” he said, suggesting that what we do with it is up to us. And then, just like that, he dropped the storyline and went on to talk about the nature of reality, about the consensual world as illusion and about DMT as an access point into understanding “the hyper dimensionality of reality as one in which everything connects to everything and everything happens all at once.”

Normally when Gallimore gives these talks he does it purely from a place of curiosity, to present what he has found to be theoretically possible — to safely subject a human to an extended-state DMT experience through intravenous injection. But this crowd isn’t just made of academics or psychonauts tickled by fanciful ideas — this is a room full of people ready to stick the pen into the apple and take a hit.

After Gallimore left the stage, Daniel McQueen, the host of the event and owner of consciousness company Medicinal Mindfulness, took his place. With his master’s degree in transpersonal counseling psychology from Naropa and a lifetime of both exploring psychedelic worlds and guiding others through them, it was surprising to see McQueen shiver a bit when he found the podium.

As firmly as he believed in what he was about to propose, he knew it was equally far out: McQueen is dead set on actualizing extended-state DMT experiences, right here in Boulder.

McQueen immediately admits the barriers that he and his growing team will confront, most notably the fact that the drug is nationally and internationally prohibited. But he also acknowledges that more subtle barriers — namely that an extended-state DMT experience as a way to explore alien worlds is going to be a tough sell to the scientific community, let alone to the Food and Drug Administration.

“In pursuing an understanding of DMT and the worlds the ‘spirit molecule’ makes apparent, we will not be regarded as serious scientists,” he says in his speech. “But perhaps it is better not to get too entangled with how we get this approved by the mainstream, but to consider how psychedelics might alter the mainstream instead.

“Yes, there will be stigmas we must confront in engaging this idea, but our goal must be to make this congruent with science, not restricted by it. We are self-empowered healers and explorers of the Strassman/McKenna lineage, trailblazers and tricksters who are as concerned with safety as we are with pushing the limits of life as we know it.”

McQueen’s vision is strong and vivid, reinforced with maps of what the “launchpad” for DMT experiences would look like, an established and growing team of strategic partners and a fundraising campaign seeking $100,000 to get the idea off the ground.

Dr. Gallimore stood in the back corner of the room, wearing a fixed expression of disbelief, which he later affirms as an accurate interpretation. It’s a look that summarizes the difference between a scientist questing after an explanation of reality and all its possibilities, and jumping into the untested waters of an extended-DMT experience.

But there’s also something nagging at him, something about the grand vision that bothers him a bit. It’s only an intellectual objection, at best a point of pride that’s not really worth mentioning. Later, though, he does, saying he appreciates the therapeutic approach to drugs and thinks it’s important to explain how they can help us pharmacologically, but he has to wonder why science doesn’t equally legitimize the exploration of alien worlds and, as such, life as we know it.