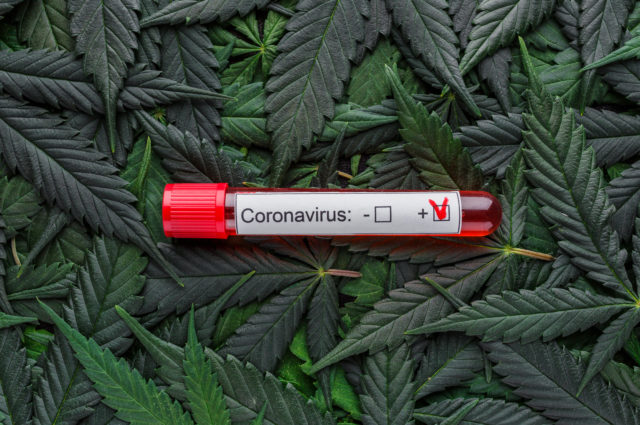 While the medical community continues push and advocate for mass SARS-CoV-2 (COVID) vaccination, and as others have sought alternative treatments like hydroxychloroquine and ivermectin, a group of scientists at Oregon State University has been investigating the usefulness of another possible treatment: weed—or, more accurately, cannabigerolic acid (CBGA) and cannabidiolic acid (CBDA) derived from hemp.

“CBDA and CBGA are produced by the hemp plant as precursors to CBD and CBG, which are familiar to many consumers. However, [CBD and CBG] are different from the acids and are not contained in hemp products,” Richard van Breeman, the study’s lead author, notes in a statement.

The study starts off explaining the virus, describing its spike proteins, and explaining that any step of the COVID infection and replication cycle is a good target for antiviral intervention. But there is one particularly important step—where COVID’s spike protein binds to the human cell-surface—that is the crux of the virus’ transmissibility.

“Therefore, cell entry inhibitors could be used to prevent SARS-CoV-2 infection as well as to shorten the course of COVID-19 infections by preventing virus particles from infecting human cells.” The study’s first section reads. It goes on to explain that “utilizing compounds that block virus–receptor interaction has also been useful for other viruses, including HIV-1 and hepatitis C virus.”

To test whether or not cannabinoids from hemp could block COVID virus-receptor interactions, the scientists used a technique called Magnetic Microbead Affinity Selection (MagMASS). As the name suggests, this technique uses magnetic microbeads to immobilize target proteins for rapid bioaffinity isolation of “ligands”—or binding molecules. For the experiment the scientists performed live COVID virus cell infection tests to determine if cannabinoids could inhibit cell entry.

Which is to say, CBDA and CBGA both effectively blocked the COVID spike protein from binding to the human cells. And they found that it effectively worked for both the “alpha” and “beta” strains of the virus, and potentially for others still to come.

“Our data show minimal impact of the variant lineages on the effectiveness of CBDA and CBGA,” the study concludes. “A trend that will hopefully extend to other existing and future variants.”

However, van Breeman also notes that burning CBDA and CBGA can remove the “A” from it (the all-important carboxylic acid). If products containing those cannabinoids are smoked or vaped, they convert from CBDA to CBD and CBGA to CBG—which he says, are not effective at blocking transmission. (Making edibles the only truly effective method of delivery to prevent/treat COVID using cannabis.)

This seems like a good place to include a disclaimer: we, at the Boulder Weekly, are not medical doctors and this is merely a cannabis column—not a scientific journal. So, if you came here seeking medical advice on preventing and treating serious diseases with weed, we recommend asking legitimate doctors. And if you’re interested in this particular study we’d direct you to the full version published on the Journal of Nature Products’ website: pubs.acs.org/doi/10.1021/acs.jnatprod.1c00946

Needless to say, if this is true, it could be very big news for both the medical community, for the cannabis industry and for people around the world. If naturally occurring cannabinoids like CBDA and CBGA can fight COVID, there may well be a natural prevention and treatment supplement readily available (and legal) across most of the US.

Thom Brodeur is the CEO of Sky Wellness, a national premium CBD product company. While he cautions consumers and producers alike to take claims like these very seriously, he also believes that we will start to see a lot more studies being published on cannabis and its potential to fight COVID—and other virulent diseases—as we learn more about it.

“We’re just scratching the surface of what we know about cannabinoid mother and minors in the CBD family and the positive and effective impacts it may have for preventative and therapeutic care including virus-based maladies as research is indicating,” Brodeur says. “To us, that’s the exciting part. There is more research to do, more ground to cover and more to discover that may—like this recent research suggests—show us use cases and value for CBD and its derivatives that have been right under our noses all this time.”