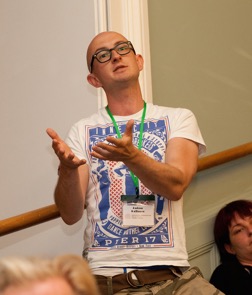 Dr. Andrew Gallimore was a very strange child, and in lots of ways too. For now let’s keep to his fascination with ghosts. Well, ghosts and vampires and werewolves to be precise, the “holy trinity” as he calls it. He didn’t exactly have an encounter, but he did frequently have an experience of a bizarre sensation, the feeling that something else was there, hovering in his left field of vision but just out of sight. He was curious, but appeased his curiosity by reading stories about all of the scary creatures that lurked in the dark.

Until he was in college, his interest in the occult was just a hobby, and he was a skeptic while exploring it. He remembers expressing a great deal of cynicism when his mother visited a clairvoyant, bemoaning how she could be so easily taken by a fraud. But she told him about her readings anyway, of the pasts behind and the futures in front of little Gallimore and his four brothers:

“And you, little Andrew,” his mother said, “she says you can talk to the spirit world.”

Dr. Gallimore certainly isn’t a mystic. He’s a neurobiologist, chemist, pharmacologist — which is to say he’s a scientist and a skeptical one at that. He’s not necessarily trying to prove himself wrong; he’s trying to prove all of us wrong. That’s because underneath all his advanced degrees and highfalutin intelligence, Gallimore is also an artist and a philosopher, someone who plays with words and ideas in a sincere curiosity of what the world is really made of.

The professional path he’s taken owes to an early experience he had with MDMA in college. His brain, flooded with serotonin as it was, suddenly gave way to the very same feeling that he’d had as a young boy, the bizarre sensation that something was hidden in plain sight. The drugs allowed him access to a very real, albeit very private experience, one that begged what is for Gallimore the ultimate question: what is the structure of reality? And just like a good scientist, all these years later he’s more uncertain than he’s ever been.

“The thing is there is no definitive real world. There is nothing objective that we can point to and say ‘It’s real,’” he says. “Your brain is constantly building a model of reality that, for humans, has functional, adaptive value. These constructions allow us to survive, whatever that means, in whatever it is that’s actually out there. Whether it’s real or not is kind of beside the point — the brain doesn’t care about all that — it only cares if it can help you survive.”

Ideas like these are no longer controversial — top- notch thinkers and scientists, the likes of Elon Musk, now posit it’s not just possible, but likely. And popular culture is ready to accept such lofty theories, primed as we are by movies like the Matrix that explore what it would be like to live in a hyperdimensional world, one that cannot be grasped without the help of the little red pill to show us just how deep the rabbit hole goes.

As it turns out, the little red pill isn’t just a prop in a movie, it exists right here, in the consensual reality we inhabit. According to Gallimore’s research, the psychedelic substance N,N-Dimethyltryptamine, or DMT, is our gateway to another world or, more accurately, the catalyst that grants us access to hyper-dimensionality. DMT reliably induces super-sensory experiences in which consumers can apprehend objects from all sides at once, moments that Gallimore describes not just as strange, but as impossible.

“These experiences are different than dreams because dreams, although bizarre, are constructed of the same elements of reality that the brain uses to process information in the waking world,” he says. “You are still a three-dimensional creature acting in a three-dimensional world, and the brain is processing that world the same way it always does.

“To understand the DMT experience you have to imagine a 100 percent reality switch. Imagine that you are a flatman, a two-dimensional entity living in a three-dimensional world. You are completely within your planar existence and so have no way of conceiving of other dimensions, no way of receiving information about them — like how a square would not be able to comprehend a cube it is embedded within. DMT makes it so that the flatman can suddenly conceive of and explore the third dimension, but for us it is an experience of the fourth, fifth, sixth dimension… and beyond.”

Commonly referred to as the “god drug,” DMT not only allows for humans to experience such omnipotence, but also introduces users to a species of divine beings, little creatures commonly described as elves or tykes. Gallimore argues the appearance of them is one of DMT’s defining features, although he doesn’t refer to them in such religious terms.

“I call them aliens,” he says. “One cannot infer what they are — whether they are divine or infernal or tricksters or spiritual guides — in different situations they might be a combination of these things. All that we can determine is that they are other than us, that they belong to a different system, as aliens.”

The next phase of Dr. Gallimore’s work is in exploring extended state DMT experiences, hoping to prolong the trip’s duration into orthogonal dimensions, and thus one’s interaction with these alien creatures. He hopes that in exploring worlds beyond this reality we might learn something from the intelligent beings that reside there and unwrap the layers of our own simulated experience in the process.