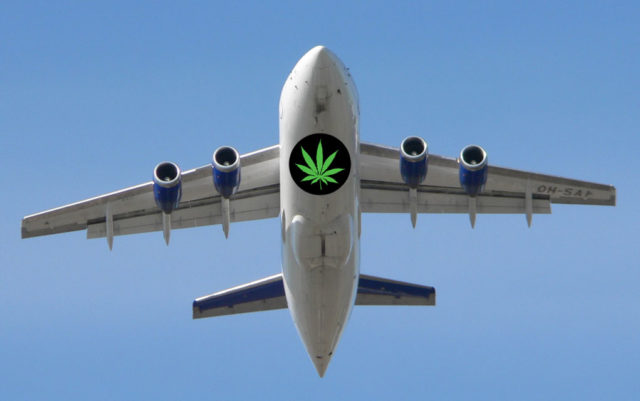 As a travel writer, I’ve spent what feels like literal years of my life going through airport security. I’ve flown with marijuana on nearly every domestic flight and not once have I ever had an issue. It’s technically illegal to transport weed across state lines, even if both states have legalized it, since the federal government classifies marijuana as a Schedule 1 (most harmful) substance. But there is enough leniency and gray area that allows many people to confidently pack weed in their carry-ons every day. Before you decide to do your personal take on a red-eye flight, here are a few basic things to keep in mind:

The Transportation Security Administration is focused on terrorism, meaning they’re looking for guns, explosives and anything else that could possibly take down a plane. With millions of people coming through Denver International Airport, they are not specifically focusing their resources on busting people for small amounts of pot.  According to the TSA website, “[Our] screening procedures are focused on security and are designed to detect potential threats to aviation and passengers. Accordingly, TSA security officers do not search for marijuana or other illegal drugs, but in the event a substance that appears to be marijuana is observed during security screening, TSA will refer the matter to a law enforcement officer.”

In response to a tweet asking about their policy on Feb. 26, @AskTSA stated “While we have no regulations on transporting marijuana, possession is a crime under federal law. Our officers aren’t searching for illegal narcotics, but they have to report them to law enforcement when discovered.”

Supposedly at DIA, if TSA finds weed on a passenger, they contact Denver Police officers who then determine if the amount found was for the passenger’s personal use or large enough to be considered illegal trafficking. If the former, the passenger is informed of the airport’s policy and given the option to throw it away in the trash with other banned items or return the product home.

Here’s DIA’s senior public information officer Heath Montgomery’s two cents on dime-bag traffic: “Generally, the airport has a policy that prohibits the possession, consumption, etc. of any marijuana products on airport property. When a person is found to have marijuana on them (an amount legal under Colorado law) at the TSA checkpoints, a Denver Police officer typically explains the airport’s rules and asks the passenger to dispose of the marijuana.

“To date,” he continues, “every single person who has been contacted about this has voluntarily complied with our request and either taken it home or thrown it away. In all of 2015, the number of people contacted at the TSA checkpoints about marijuana possession was only 29. That was out of 54 million passengers. The numbers have been so small that the police no longer track these contacts.”

First of all, keep it domestic. Don’t risk getting locked up abroad by bringing it on international flights. While I can’t encourage anyone else to break the law, I can tell you what I do when I fly with pot.

I keep everything in almost plain sight. Going out of your way to hide things in jars of peanut butter is sketchy and suspicious. I usually put all of my flower, edibles and vape pens together in a little dopp kit and throw that in my backpack.

I don’t fly with much. I keep it to a personal amount, like no more than an eighth of bud and a small assortment of edibles. A larger amount might call attention, which means a higher chance of having to throw it away.

If I were to bring a suitcase full of weed, they might assume I intended to distribute it and that’s called drug trafficking. If I’m traveling with vape cartridges or oil, I make sure I have less than 3 ounces because TSA has strict rules about liquids. Also, don’t even bother trying to bring a marijuana drink or elixir since the TSA is highly concerned with water bottles.

Edibles are the easiest to transport since they’re so inconspicuous. I see a lot of tourists buy regular candy bars or bags of gummy bears to hide their edibles in different wrappers, but I think even that is extra.

While it’s remarkably easy to fly with weed, there are still plenty of situations where it can get you in trouble with the law. So make sure you’ve thought it all through for yourself.