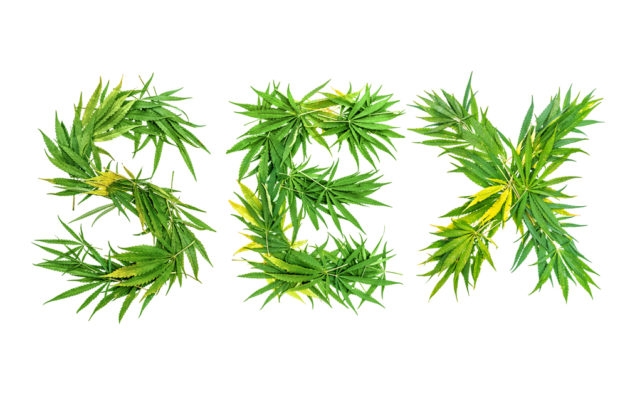 Science has gone and done it again: revealed a finding about marijuana that surprises absolutely no one.

Brace yourselves: People who live in states where pot is legal. Have. More. Sex.

Who could have imagined a plant that alleviates pain, stimulates the appetite and increases overall feelings of well-being could also open people’s minds to pleasure?

All of us. We all knew. But thanks, science, it’s good to have it on the books officially.

In a review published in the Journal of Health Economics, researchers from the University of Connecticut and Georgia State University specifically looked at states where medical marijuana was legalized.

Researchers allowed time for medical marijuana laws (MMLs, as they refer to them in the study) to take affect — states used in the study had regulated medical marijuana between 2005 and 2014. The study then analyzed sexual and reproductive behavior of folks in their 20s and 30s. (Looks like we’re going to need another study to see what pot does for the 40+ sex life… but we’ve got a feeling it helps. Still, let’s get that on the books too.)

In addition to an increase in sex, the researchers found that MMLs led to “a reduction in contraceptive use conditional on having sex, and an increase in number of births.”

That’s a good thing, right? We’re going to say it is.

The U.S. birthrate fell to a 32-year low in 2018, according to the Centers for Disease Control and Prevention. Dowell Myers, a demographer at the University of Southern California, told NPR it’s “a national problem” and called declining birthrates “a barometer of despair.”

But the Health Economics study’s findings get less fun (and more questionable):

“There is also suggestive evidence on temporary increases in the state-year gonorrhea rate.”

While Colorado wasn’t one of the states studied, sadly, the state is seeing a huge spike in the rate of sexually transmitted diseases.

The Colorado Department of Public Health and Environment recorded 8,478 gonorrhea cases in Colorado in 2017, amounting to a nearly 200% increase in cases over a five-year period.

While rates of chlamydia and syphili also grew, the rate of gonorrhea infections grew most sharply, “up 150% in 2018 from four years earlier to an estimated 2,703 Denver cases,” wrote Denver Public Health on April 30, 2019. “Increases in gonorrhea cases have been seen in both men and women.”

Now, can this all be blamed on marijuana? No. Absolutely not. The Centers for Disease Control and Prevention notes that unstable housing can increase rates of STDs, as can lack of access to medical care, stigma, drug use and poverty. Those are issues the U.S. is facing as a nation — Colorado included. And by the way, rates of STDs are up across the country, not just in states where medical marijuana is regulated.

As for the Health Economics research on pot’s affect on sex and baby booms, the researchers say the increase in gonorrhea rates (and you’re going to love this wording, emphasis mine) “may be attributed to behavioral responses including increased attention to the immediate hedonic effects of sexual contact, increased sexual frequency, as well as delayed discounting and ignoring the future costs associated with sex.”

While the abstract of the paper doesn’t get into specifics about why they think pot plays a role in temporary increases in gonorrhea, it’s my gut instinct to say let’s not go blaming pot for something we’re seeing everywhere, in states without medical marijuana laws.

Also — and I’m not saying these 20- and 30-year-olds included in the study weren’t educated — sex education in this country is abysmal. I mean, Colorado doesn’t even require students to learn sex education or HIV prevention. Just 24 states mandate sex education for K-12 students.

Ending on a more positive note, the Health Economics research did offer a counterpoint to the longheld but poorly researched concern that marijuana use decreases fertility.

“Our findings on births,” the researchers write, “suggest that behavioral factors can counteract the physiological changes from marijuana use that tend to decrease fertility.”

In other words, cannabis may influence birth rates positively through behavioral effects.