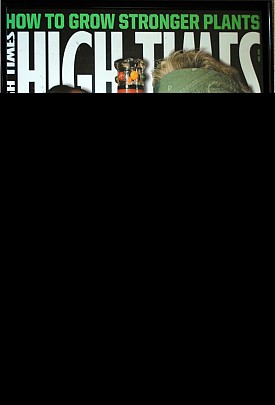 Probably the strangest paragraph in Colorado’s first attempt to regulate marijuana was the one that stipulated that “magazines whose primary focus is marijuana or marijuana businesses are only sold in retail marijuana stores or behind the counter in establishments where persons under 21 years of age are present.”

Yes, you read that correctly. Magazines about pot like High Times would have to be hidden behind the counter alongside Gallery or Gent, with the astounding caveat that anyone under 21 could purchase the magazines in question — but he or she couldn’t look at it in the store. And I say “was” because it was rendered moot rather quickly and efficiently.

The statute was a last-minute, Hail-Mary insertion from Rep. Bob Gardner, R-Colorado Springs, who was apparently among the 40 percent of the state’s voters who didn’t approve Amendment 64. “The idea is that we need to keep marijuana out of the hands of children. That we don’t want to encourage the use, we want to discourage the use by children,” Gardner told CBSNews in Denver while the bills were being debated. “Let me emphasize these publications are not banned. They’re not prohibited. Their marketing is being controlled.”

Never mind that kids can see the same marijuana ads in their own homes, right here in the back pages of Boulder Weekly, the Denver Post and other newspapers and magazines. If Smart Colorado, a group that wants to discourage teenage pot use, put out a magazine, would it be illegal since its “primary focus would be marijuana?” As written, it just didn’t make any sense.

Given that there are lawyers among our legislators, I’m guessing that the “treat pot magazines like pornography” reg was allowed to go through knowing it would be legally indefensible but necessary to get these rules and regulations passed within the strict timeline set by the amendment.

It didn’t take long for the hammer to come down. The regulations were signed into law by Gov. John Hickenlooper on Tuesday, May 28. The next day, making good on an earlier threat after the legislature first passed the regulations, David Lane, the civil rights attorney who represented Ward Churchill in his case against CU, filed a lawsuit in federal court, representing High Times, The Daily Doobie and The Hemp Connoisseur, all three operating within the law in Colorado and claiming, not surprisingly, that it was a violation of their right to free speech. Unspoken was that in the case of the Doobie and the Connoisseur, the regulation would probably be a nail in the coffins of their respective businesses.

On Tuesday, June 4, another lawsuit, Tattered Cover v. Brohl, was filed by the ACLU of Colorado and Media Coalition Inc. on behalf of the Tattered Cover, Boulder Book Store, Magpies Newsstand in Durango, Book Train in Glenwood Springs, Woody’s Newsstand in Greeley, Al’s Newsstand in Fort Collins, American Booksellers Foundation for Free Expression, and Mountains and Plains Independent Booksellers Association, all businesses that would be affected by the new regulation.

On Thursday, two days after the second lawsuit, the Marijuana Enforcement Division called the pro vision unconstitutional and said it wouldn’t enforce it. Attorney General John Suthers concurred and issued an emergency rule. “No magazine whose primary focus is marijuana or marijuana businesses is required to be sold only in retail marijuana stores or behind the counter in establishments where persons under 21 years of age are present, because such a requirement would violate the United States Constitution, the Colorado Constitution, and section 24-4-103(4) (a.5)(IV), C.R.S.,” the rule said.

That’s pretty clear. Federal Judge Richard Matsch thought so, too, and he wisely rejected the state’s call for the dismissal of the lawsuits. Matsch gave the state until the end of the month to respond to those.

The attempt to create a set of rules and regulations to treat marijuana like alcohol in Colorado is in its earliest stages. In this case, the checks and balance system worked the way it should. The legislature overreached, and the Attorney General’s office stepped in. Look for many more course corrections like this along the way.

What do you want to know about legal marijuana in Colorado? Tips, suggestions. criticisms to weed@boulderweekly.com.