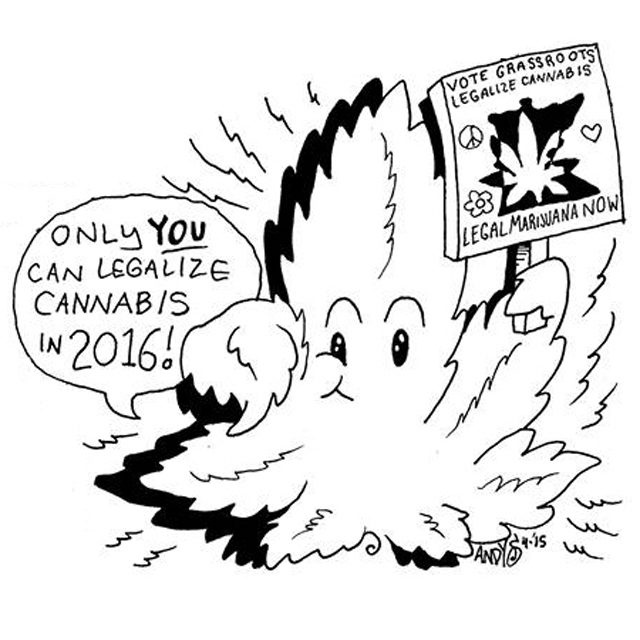 The first recreational marijuana shops opened in Massachusetts this week, after the state voted to legalize cannabis in 2016.

It’s been a long time coming for Massachusetts residents eager to live in a world of legal weed, and the occasion was marked by a rare sighting: Sasquatch.

A creature known as “potsquatch” made an appearance on Tuesday morning, according to The Boston Globe. Potsquatch is not a real ’squatch of course — no, it’s the creation of local businessman Dave Mech, who donned a full-body costume that looks like a Sasquatch covered in pot leaves.

Mech — er, Potsquatch — waited outside one of two shops to open in Massachusetts this week, according to the Globe, hoping to be one of the first patrons (real or mythical) to purchase legal recreational marijuana in the state.

The decision for a grown man, and a community business leader, to dress up like a mythical beast reflects the enthusiasm Massachusettans (?) have for their legal weed. But Potsquatch is far from the first marijuana-themed mascot to make a public appearance.

Pro-marijuana group ResponibleOhio released “Buddie” on the world in 2015 during legalization efforts. Buddie is the stuff of nightmares — he’s got a marijuana bud for a head, and has rippling quadriceps and eight-pack abs that a tight, white spandex suit struggles to contain. Buddie visited college campuses in a rented RV, which was probably really fun for everyone involved, except those that had smoked too many of Buddies cousins that day and thought he was there to avenge their herbaceous deaths.

Leduc, a small city in Alberta, Canada, rolled out a cartoon mascot named Buddy (the name is kind of inescapable), but it was shelved due to negative public feedback, largely from people who thought because children like cartoons, they might be attracted to a cartoon marijuana figure. I guess that makes sense.

Bongman graced Toronto streets in 2010. A giant bong dressed like Superman, Bongman’s stem served as a really disconcerted and giant phallus. That’s a hard pass on Bongman from me.

A San Francisco company made the social media rounds with a taxidermied goat wearing sunglasses and holding a joint in his mouth. If you think factory farming is the worst fate any livestock animal can suffer, think again.

There was Bongy, a mascot that looked like one of the seven dwarves wearing an adult diaper, and he was quickly banned from his pot shop promotion duties in British Columbia.

“The Herb” — hey, there’s another smart name — was a pot leaf mascot promoted by a Canadian cannabis advocacy company. His eyes were glazed over, which doesn’t make a lot of sense, because that means The Herb was smoking himself.

Of course, the most esteemed de facto mascot of marijuana is Willie Nelson. I was awake at 3 a.m. the other night watching a PBS concert in which Jack Johnson sang a song about getting high with Willie Nelson. And come to think of it, there are many, many songs and tall tales about people getting on Willie’s tour bus and smoking. The man embraces it, and alongside Snoop Dogg, there are few other actual celebrities that best represent all that you can be if you smoke pot. Now all we need is to get Willie into a Superman costume with a giant bowl erection, an adult diaper and a Muppet bud head with a firm jaw line, and we’re onto the definitive weed mascot.