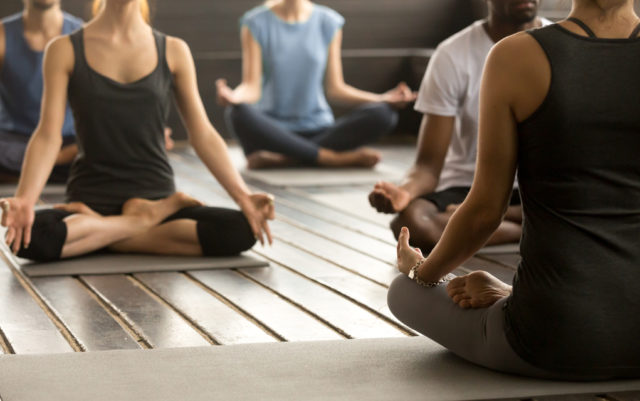 Cannabis-enhanced yoga might not be everyone’s cup of chai, but the relationship between the plant and the practice goes back to yoga’s very roots. The two have been intertwined through spiritual texts and usage for thousands of years.

Interrupted only temporarily by prohibition (in the U.S. and in India), yoga and cannabis are once again finding harmony in legal markets in the U.S., in yoga studios in Oregon, California and, of course, here in Colorado.

Cannabis can help deepen your yoga practice, enriching the meditative aspects, while making the exercise itself more enjoyable. And between research done on the mat and in the lab, we’re starting to gain an understanding of why.

Before all that, though, a brief history: The first mention of cannabis in Indian Hinduism is in the oldest Vedic text, the Rigveda, written between 1700-1100 BCE — the very same text that describes one of the original and most primitive forms of yoga. Cannabis is also described in the Arthhavaveda as one of the five sacred plants, and as the Lord Shiva’s favorite “food.” Thus, it has most often been associated with spiritual sages and meditation in Hinduism.

Most commonly, cannabis has been consumed orally in Indian traditions, in a drink mixture called bhang — but it is also smoked in earthenware chillums in the forms of ganja (leaves and female flowers) and charas (separated resin). That was, until the U.S. set a precedent with prohibition and spread the drug war to India in the late 20th century. In the ’80s, the Indian government banned the use of charas and ganja, following America’s lead — though it’s still allowed to use leaves and seeds to make bhang for religious purposes.

All of which is to say, cannabis is a sacramental substance in India and has been for thousands of years. It’s used in prayer, ritual and meditation — which is the very core of yoga. Asana (yoga flow) is a practice of moving meditation, of quieting the mind and centering oneself in the present moment. Which is why, to many, cannabis feels like a yogic performance enhancer.

And, at least in my experience, cannabis also makes the exercise aspect of yoga more enjoyable. I can focus on feeling my muscles more deeply, as I breathe through different poses; it’s easier to relax into each position; stretches feel as though they have greater depth; and it takes less time to fall into the rhythm of the flow.

That’s all anecdotal, of course. But science backs it up: One study from the Proceedings of the National Academy of Sciences suggests that the euphoria of “runner’s high” actually comes from natural stimulation of the endocannabinoid system — the same system that cannabis affects. Many people believe that our endocannabinoid receptors are activated by yoga as well, at least partially explaining why cannabis might make yoga feel even better.

Additionally, in a survey done by Angela Bryan, a professor of psychology and neuroscience at CU-Boulder, 70% of cannabis users in the U.S. claimed to use cannabis with exercise and said that doing so made the workout more enjoyable.

There are medicinal benefits too. Modern cannabis products like salves offer some functionally useful benefits for any yogi that experiences joint pain, inflammation or arthritis. I’ve noticed that if I lather some Stratos Soothe ER or Mary’s Medicinal muscle freeze on my joints before class, it drastically reduces any soreness or discomfort, and prevents those skeletal crackles and pops that otherwise punctuate my practice. CBD tinctures and consumable products are also powerful yogic supplements for the same reasons.

Yogis can experiment in their own practice to see for themselves if cannabis-enhanced yoga is for them. Or, (once this pandemic is over) try dropping into any one of Colorado’s multiple “infused yoga” schools like Marijuasana or Twisted Sisters, both in Denver. They offer specialized yoga classes promoting stigma-free cannabis-enhanced yoga.

Of course, a yogi shouldn’t need cannabis to enjoy yoga. All of the physical and mental benefits of asana are achievable stone-cold sober — and that’s important to experience.

As more states legalize cannabis, and as the stigma of use dissolves, the plant and the practice are finding each other again — and people are realizing just how beneficial the combination can be.