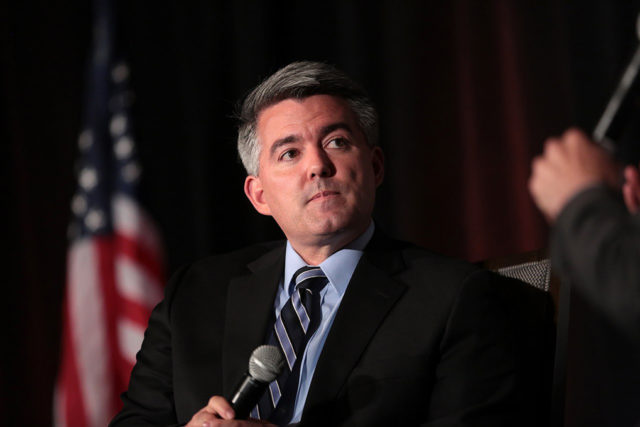 Cannabis is still illegal on a federal level and the people with marijuana charges are still criminals with criminal records. That’s the message the Senate sent when they blocked Sen. Cory Gardner’s attempt to make cannabis reform part of the First Step Act, a fairly mild criminal justice reform bill.

In an effort to prove that he’s Not A Regular Republican, He’s A Cool Republican™, Gardner is a staunch defender of everything Colorado stands for: money, freedom and weed. He fought to include provisions in the bill that protect consumers and industries that are acting in compliance with state cannabis laws from federal criminalization, as well as any federally insured banks that want to provide services to them. He believes that each state has the right to determine for itself the best approach to cannabis within its borders. Gardner’s amendment also sought to extend those protections to Washington, D.C., U.S. territories and federally recognized tribes, and contains common-sense guardrails to ensure that states, territories and tribes regulating cannabis do so safely.

But Gardner’s attempts have been shut down because D.C. operates on the same level of petty as a high school cafeteria. At first, all senators hoping to offer amendments of their own were blocked by a procedural maneuver from Senate Majority Leader Mitch McConnell. Gardner then sought unanimous consent for his amendment and was blocked again when Sen. Chuck Grassley (R-Iowa) objected and called the idea a “back door to legalization,” stopping the measure dead in its tracks without a formal roll call vote.

The outing Judiciary Committee chairman and longtime cannabis opponent said the amendment’s effect of allowing cannabis businesses to access banks would be “inappropriate to consider in the context of a criminal justice reform bill.” Grassley did, however, concede that, “Maybe there will be, at that point, an opportunity to consider his approach as something lesser than the legalization of marijuana generally.”

Following the procedural defeat before yielding his time to the floor and still reeling from the emotional distress of rejection, Gardner gave a 10-minute passionate speech, telling his colleagues all about how Colorado’s cannabis industry deserves full access to the American financial system. Then he launched into the problems surrounding the discrepencies between federal cannabis prohibition and the growing number of states that allow cannabis for medical or recreational use.

“But being from Colorado, it is hard to think about federal criminal justice reform without thinking about the biggest problem the federal criminal law creates for Colorado: the refusal to respect the will of Coloradans when it comes to marijuana. Every day, Coloradans of good faith follow Colorado law to a T, yet they are still criminals in the eyes of the federal government. Cancer patients using medical marijuana to control their pain and veterans who are using marijuana to alleviate the PTSD they suffer because they served their country — federal law says they are criminals. The People do not think that. So the federal law should change.

“This disconnect doesn’t just effect the industry’s patrons, or even just its growers and retailers for that matter. It also makes criminals of those outside the industry. Plumbers, electricians, bankers, landlords and real estate service providers, employment and advertising agencies, insurance companies, HR services and all of the everyday businesses that interact with the marijuana industry (like they do any other part of our economy) are affected by the federal law, too. That’s because when they take money from a marijuana business federal law considers them money launderers — putting them at risk for both criminal liability and civil asset forfeiture.

“The disconnect forces Colorado’s $1.5 billion market into the pseudo-shadows, where business is in hard-to-track cash, inviting dangerous robberies and hindering law enforcement efforts to ensure that legal marijuana sales benefits legitimate businesses rather than illicit cartels. It also means that researchers can’t test marijuana for medical efficacy or to help better understand impairment because those researchers fear of losing federal funding.”

Gardner’s attempt mirrors a bill he introduced with Sen. Elizabeth Warren (D-Massachusetts) last summer. Gardner said he plans to reintroduce that bill during the next Congress. President Trump indicated he would support Gardner’s legalization bill when it was introduced in the Senate in June 2018.

The bill would amend the Controlled Substances Act (CSA) so that — as long as states and tribes comply with a few basic protections — its provisions no longer apply to any person acting in compliance with state or tribal laws relating to marijuana activities. It would also clearly state that compliant transactions are not trafficking and do not result in proceeds of an unlawful transaction.

The First Step Act is short for Formerly Incarcerated Reenter Society Transformed Safely Transitioning Every Person Act (because Congress stays thirsty for acronyms). The name is meant to indicate that the bill is only the first step in reforming the federal criminal justice system. Without Gardner’s amendment, the First Step Act swiftly passed on Tuesday, Dec. 18, 87-12.

Later that day, Gardner sent out a tweet with a video of his speech, vowing that he “will not give up this fight,” which, yes, has been a long, long fight.