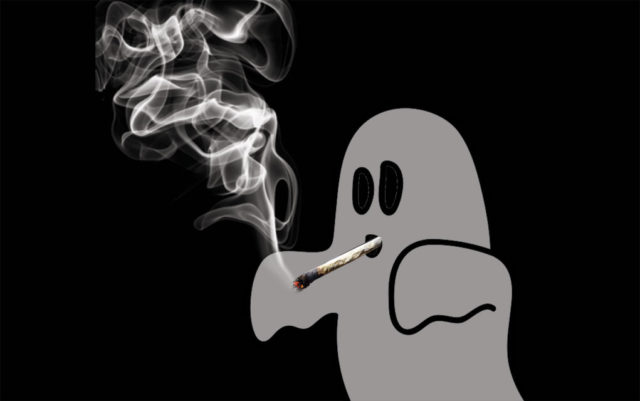 Halloween is pretty much the best. What’s not to love about a holiday that encourages you to eat excessive amounts of sugar while pretending to be someone else? Whether you’re taking the kids trick-or-treating, getting into Facebook fights about cultural appropriation or drunk dialing your ex in a pair of poorly constructed animal ears, there’s a lot you don’t want to miss out on. Here’s your guide to doing it right.

Candy is the reason we all started caring about Halloween in the first place, like way back in the ’90s before we all found out about our gluten allergies. Now as a health conscious adult, I try to avoid sugar, so if I’m eating candy, it better get me stoned. There are a variety of delicious options available at dispensaries, my favorite being Coda Signature truffles or brownie bites from Sweet Grass Kitchen. Just don’t be a dick and eat all of your kid’s hard-earned candy when you get the munchies.

Speaking of which, the media and law enforcement love to spend this time of year warning parents of the scary things that could potentially be handed out to their children, with an emphasis on looking out for weed-laced candy. The amount of hysteria that has been generated around this is insulting to a legalized industry that is striving to do all it can to deliver the highest standards of safety.

If you’re a parent feeling anxious about this, I would like to calm your fears by reminding you that your kids are more likely to die in a school shooting than dying because the neighbors fed them weed. Besides the fact that I was unable to find a report of a child being killed or seriously injured by pot candy acquired while trick-or-treating, edibles are expensive. So if you find them in your kid’s orange pumpkin basket this year, please let me know which neighborhood you live in because I would very much like to meet the wealthy sociopath giving out free drugs by the handful.

At this point in my life, Halloween isn’t about being scary, it’s about looking for tasteful ways to put my cleavage on display and shoving my body into a corset before I start eating carbs for the winter. When it comes to cannabis-themed costumes, the possibilities are endless. Dressing up as a famous stoner in pop culture is always classic, like Willie Nelson, Puff the Magic Dragon, Cheech and Chong, Abbi and Ilana from Broad City, the cast of That 70’s Show, the cast of Scooby Doo, Nancy Botwin from Weeds, Harold and Kumar, Snoop Dog and Martha Stewart, and so on. Some of those are a little played out and part of doing Halloween right is showing the world your creative side, which can be done with strain-inspired costumes like Granddaddy Purple, White Widow, Space Queen and Grape Ape. You could also make a political statement by going as Attorney General Jeff Sessions or dress in an orange jumper and tell people you’re representing one of the thousands who are still incarcerated for nonviolent marijuana offenses. Whatever you do, just don’t promote the stereotype of stoners being lazy with a last-minute decision to go out with a pot on your head.

Unless you are pregnant or super old, there is not a single reason you shouldn’t go out on Halloween. It’s so annoying when friends are like, “I’m just going to stay in and watch Hocus Pocus.” No, we’re not 10 years old. Get off your couch and go eat some mushrooms and visit a corn maze like a real adult. There are a ton of haunted houses nearby, including Denver’s 13th Floor Haunted House, which was shown on the Travel Channel as one of America’s scariest attractions. If you don’t like partying or are looking for something family friendly, there are a plethora of local pumpkin patches, parades and other Halloween events happening all October.

If you want to participate in this holiday without ever leaving your house, Netflix has a category just for you. I don’t like horror movies, so my favorite Halloween movies are The Craft, Practical Magic and Mean Girls. Don’t even try to argue with me on the last one because it’s a cinematic masterpiece and it’s just as much of a Halloween movie as Tim Burton’s Nightmare Before Christmas.