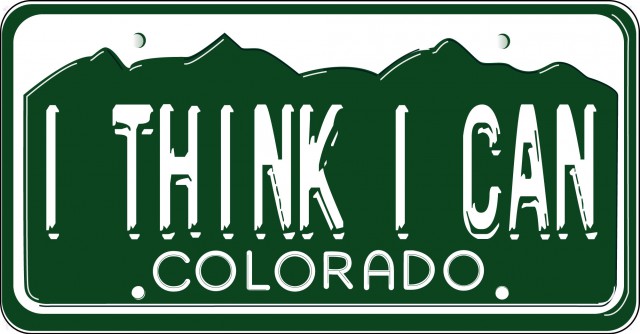 I had read the stories about the license plates. The profiling of Colorado drivers. Especially when using Interstate 76, the highway that connects Colorado to Interstate 80 in Nebraska. The tidal wave of quarter ounces Nebraskans were bringing back from Colorado stores and Coloradans were distributing elsewhere, swamping local highway patrols and draining their resources. Anecdotal tales of people being pulled over and searched just because of the plates.

I’m happy to report that, at least in our case, and we drove more than 2,700 miles on a recent trip, with hostile Colorado plates, right up Interstate 76 to Nebraska and through cities and towns in Kansas, Oklahoma, Texas and New Mexico, and we weren’t stopped once, or harassed by police or state troopers. Our car wasn’t searched. We weren’t asked about it when finding lodging. Except for friends and relatives, nobody on the road was curious about cannabis. I was almost disappointed.

We got home on Halloween afternoon. The news stories about cannabis edibles and kids had already begun when we left, and the fear quotient crescendoed as the holiday approached. (Cecelia Gilboy outlined the insanity that ensued in Colorado over edibles in this space last week. http://bit.ly/1y32mNL)

One story in particular, from Prince George’s County in Maryland, said that police there, after they had seized a small quantity of edibles from Colorado, went directly to television news to warn parents that more edibles might be out there, and that they might be intended for children.

It was a small, isolated case, and the officers offered no hint of evidence nor suspects linking it to a possible child-poisoning ring, but this made national news, even on the Great Plains. Nobody asked why anyone who had obviously invested an enormous amount of money and effort to smuggle expensive edibles across the country would then give them to children to make them sick on Halloween. That’s just crazy.

But crazy never stops television news reporters from rounding up a few mothers to tell us now they have another thing to worry about. Though no child has ever, or will ever die from cannabis intoxication, the word “poison” is always the common term for this non-existent “crime.” The absurdity almost rivals the old Harry Anslinger days when the official government line on marijuana was that it made people rape, kill and pillage the countryside.

Things got so crazy here that the Colorado Department of Public Health and Environment recommended, briefly, removing all edibles from dispensary shelves because they “are naturally attrac tive to children.” How much more absurd can that be?

And it misses a couple of basic points. You might think that television reporters don’t have Internet access. If they did, they could check the myth-debunking website snopes.com, which couldn’t find one case of kids being randomly distributed poisoned candies or razor blades on Halloween in American history.

So of course, there were no reports anywhere of cannabis edibles being found in their goodie bags or children going to hospitals. But when it comes to fear tactics, that’s never the point. The perception has been planted that people who use cannabis are more devious than those who don’t — and might endanger your children. Mission accomplished.

Sunday night I attended a Mike Dunafon-sponsored event in Denver as part of a huge panel of cannabis businesspeople, politicians, lobbyists, event organizers, activists and parents. Everyone there was in favor of legalization, so there was no actual debate or disagreements, just a reaffirmation of everything that’s happened in the last year.

The guest panelist was Tom Tancredo, who brought up one point that didn’t get immediate applause. He said that just because cannabis is legal in Colorado doesn’t mean that it will always remain so, and he suggested that people in the cannabis community be extremely vigilant about the negative side of the cannabis debate.

With stories of profiling license plates and Halloween “poisonings” dominating the news for days at a time, it’s not a bad thing to think about.

Almost a year after retail dispensaries opened, the industry appears to be work ing as well as can be expected. The state, on 20 occasions, tried to catch businesses selling to the underage and failed in all cases. The state and counties and cities who allow retail are richer than they were at this time last year.

Businesses working within the system to create a safe marketplace for what many consider an outlaw product are invested in making it work, and so far that’s happening. When everyone sees that cannabis businesses are no different than any other, perceptions will change.

National television is still the way most people get their news. Sanjay Gupta’s two CNN specials had more positive impact on medical cannabis and Colorado than anything else media-wise this year. The sad part is that no major medical TV figure has followed his lead and called the government out on its outright lies about cannabis.

On the advertising front, the Marijuana Policy Project, especially its website consumeresponsibly.com, which offers easy access to information about legal, personal limits and responsibility, is leading the way in informing the public about cannabis in an honest, straightforward fashion. Look for more ads from MPP and, hopefully, others, on the positive side of the legalization issue. We have a lot to be thankful for, and a lot to be proud of in the first year of our state’s “reckless” experiment. We have to continue to make sure that everybody knows about it.

You can hear Leland discuss his most recent column and Colorado cannabis issues each Thursday morning on KGNU. http:// news.kgnu/category/features/weedbetweenthe-lines/

Seattle cannabis businesses may start getting their deliveries via drone