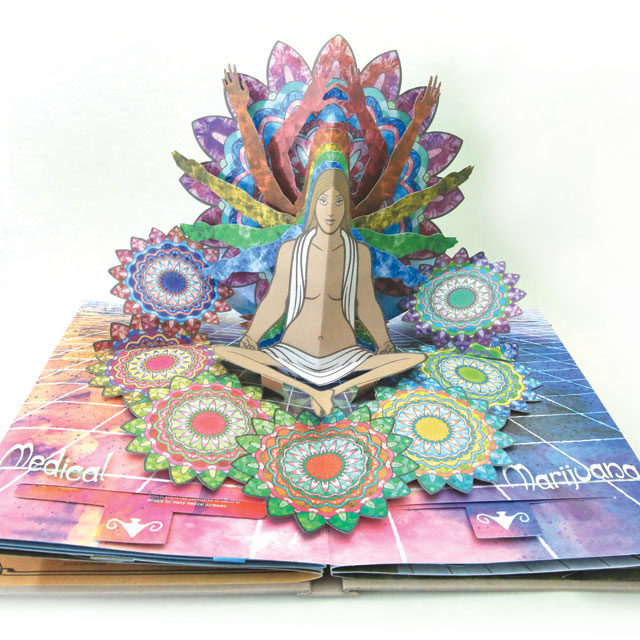 Are you looking for the perfect gift for the marijuana enthusiast on your holiday shopping list? Or maybe it’s an artist you still need to shop for. Or a book lover. Doesn’t matter, we’ve got the perfect present.

Just in time for the holidays, Poposition Press has released Dimensional Cannabis, what they are calling the world’s first pop-up book about marijuana.

Denver-based designer Rosston Meyer runs Poposition Press, an independent publishing company that creates limited edition pop-up books. Each book is crafted by hand after Meyer and the paper engineer have gone through countless edits and redrafts. Every piece is cut out, positioned and fastened into the book by Meyer himself.

“Like many people, I had a few pop-up books as a kid,” Meyer said in an interview with BestPopUpBooks.com in 2016. “But it was when I was a teenager and I got a copy of Robert Sabuda’s Alice in Wonderland book that I was first really amazed by a pop-up book and had the thought to one day make one myself.”

Meyer dreamed up the idea for a pop-up book about marijuana about five years ago. Meyer created the concept for Dimensional Cannabis, and tapped world-renowned American illustrator/graffiti writer/tattooer and artist Mike Giant to illustrate.

Paper engineer (who knew that was a job?) Ray Marshall engineered the paraphernalia spread. He is best known for his books The Castaway Pirates and the Paper Blossoms series.

Award-winning paper engineer Simon Arizpe engineered the history spread (which amazingly covers some 10,000 years of human-cannabis interaction). Arizpe’s pop-up work has been honored with the Meggendorfer Prize, which is kind of the Heisman trophy of pop-up book design. He is the professor of paper engineering and three dimensional design at The Pratt Institute and Parsons School of Design in New York City.

The late Roger Culbertson was a paper engineer, pop-up book designer and innovator who published nearly 100 titles over three decades, made The Guinness Book of World Records twice for the World’s Largest Pop-up Book, and set industry standards for paper engineering, design and production that influence the craft to this day. Roger engineered the cultivation spread. He passed away suddenly in 2018.

There are three editions of Dimensional Cannabis available for purchase: The regular pop-up retails for $42; the collector’s edition (which includes the book with six pop-up spreads and gold foil casewrap; a foil-stamped slipcase in green bookcloth; a set of three enamel pins; a pack of four stickers; an art print on hemp paper; and an etched joint case by Elevate Accessories) will cost you $200; while the “Connoisseur Edition” runs $360.