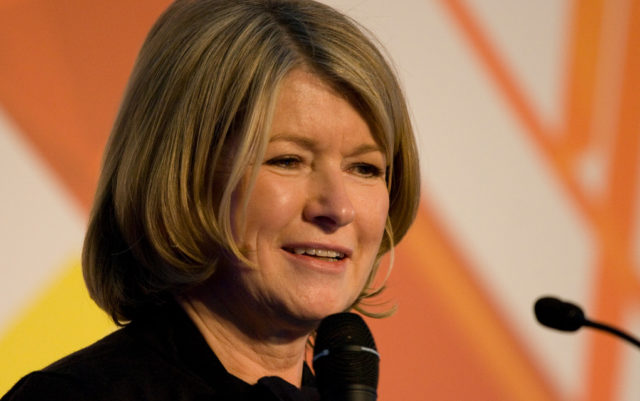 Martha Stewart is the definition of a true boss. Long before the days of Instagram, she was the OG lifestyle influencer who built an entire brand around her dinner party aesthetic. Now, she’s announced she’ll be joining Canopy Growth, one of Canada’s biggest weed corporations. Through her parent company Sequential Brands, Stewart will come on in an advisory role to help develop a new line of hemp-derived CBD products. According to a press release announcing the partnership, she will “assist with developing and positioning a broad new line of product offerings across multiple categories.”

“I am delighted to establish this partnership with Canopy Growth and share with them the knowledge I have gained after years of experience in the subject of living,” Stewart said. “I’m especially looking forward to our first collaboration together, which will offer sensible products for people’s beloved pets.”

It makes sense that Stewart is working on CBD products for pets. Not only has she been an outspoken animal rights advocate in the past, but she’s also a mom to her two beloved Persian cats, Empress Tang and Princess Peony, and her two chow chows, Empress Qin and Emperor Han. (Side note, based on the distinction of the names alone, I genuinely hope to be reborn as one of Stewart’s pets in my next life as it’s probably the closest I’ll ever come to royalty.)

I’m excited about this for a number of reasons. First of all, if you haven’t been riding the Martha train lately, let me just remind you that this woman is #goals. She went from teaching a few people how to cook in her own kitchen to a celebrated entrepreneur who literally built an empire around living a flawless lifestyle. After she got super rich, published all the cooking books and won a bunch of awards, she went to jail for rich people things and ran shit there. After she was released, she became best friends with Snoop Dogg. On the surface, it may seem like they have nothing in common (except incarceration), but they met in 2008 when Snoop made mashed potatoes on Stewart’s cooking show. He reappeared on her show again a few years later for an ahead-of-its-time weed brownie episode. The duo eventually went on to host their own TV show called Martha and Snoop’s Potluck Dinner Party. This has never been confirmed, but I like to think the idea came to them during their first smoke sesh. The concept is to bring celebrity chefs and rappers together for a cook-off. The show is as amazing as it sounds and their unlikely friendship is both beautiful and inspiring.

Canopy Growth was the first cannabis company to enter the New York Stock Exchange and supplies one-third of Canada’s 250,000 medical cannabis patients. Snoop has had a business relationship with Canopy for years, and in 2016, he launched three cannabis varieties with Tweed, a subsidiary of Canopy that makes recreational cannabis products, under the brand name “Leafs by Snoop.”

In January 2019, Canopy Growth developed diverse product offerings specific to hemp-derived CBD and the company looks forward to working closely with Martha Stewart as it further develops and introduces these products to market in the future. Canopy Growth previously reported that it will invest between $100 and $150 million in a hemp industrial park in New York state with an intended purpose of being the company’s first hemp facility in the United States. Martha’s partnership with Canopy Growth is in the developmental stage. A release date has not been scheduled to debut her CBD products just yet.